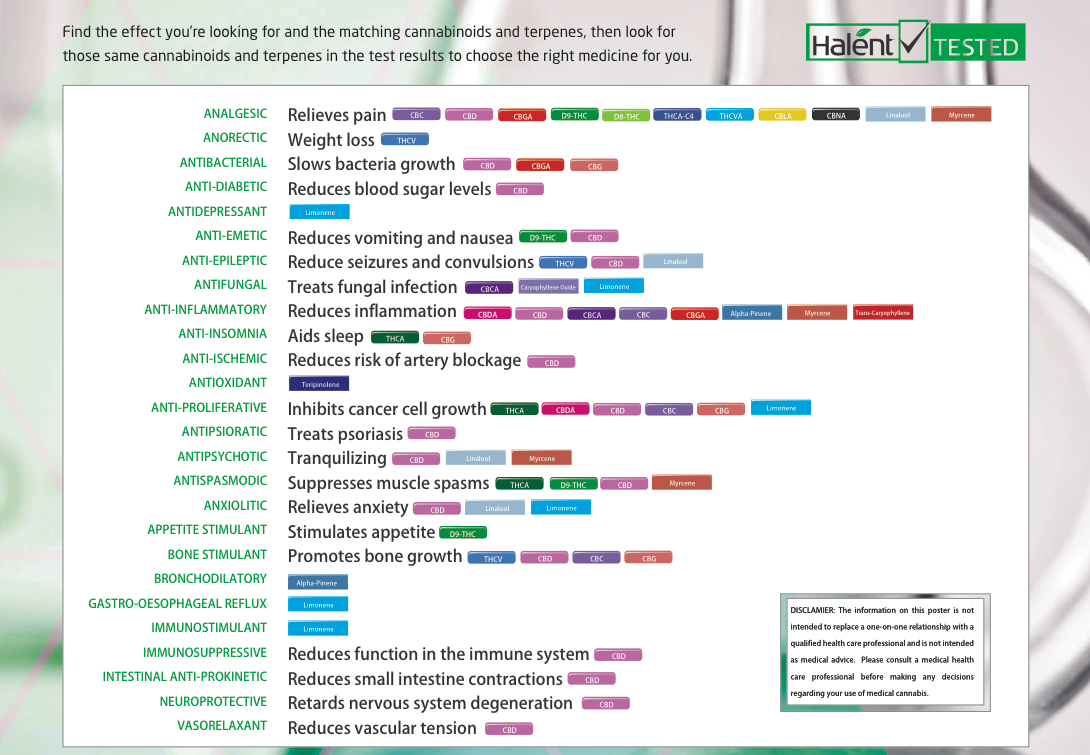 Halent Labs has developed a spiffy, color-coded chart to help medical cannabis users select strains best suited to treat their symptoms. The chart lists and defines desired effects, from “Analgesic” to “Vasorelaxant,” along with 23 cannabinoids and terpenoids that supposedly contribute to those effects. The chart misleadingly implies that the impact of all these cannabinoids and terpenoids is well established in human beings.CBD is the most versatile tool in the Cannabis plant’s kit, according to the Halent chart. It “reduces pain, slows bacteria growth, reduces blood sugar levels, reduces nausea and vomiting, reduces seizures and convulsions, reduces inflammation, reduces risk of artery blockage, inhibits cancer growth, treats psoriasis, is tranquilizing, suppresses muscle spasms, relieves anxiety, promotes bone growth, reduces function in the immune system, reduces small intestine contractions, retards nervous system degeneration, and reduces vascular tension.” Reference to CBD as an anti-depressant is omitted.

The chart was developed by analytic chemist Don Land based on studies published in peer-reviewed journals. The 23 cannabinoids and terpenoids it refers to are the ones Halent is testing for.

Although the chart implies that the ability of the listed cannabinoids and terpenoids to provide the specified effects has been well established, the evidence of benefit ranges from very strong to very slight. Establishing (or disproving) efficacy was the impetus for Project CBD and the SCC survey.

Halent plans to track patients’ responses to CBD-rich Cannabis and strains containing other compounds of interest. They’re undoubtedly aware that telling people what to expect from a given type of Cannabis will influence the effects reported, and that peer-reviewed journals would not publish data skewed in this way.

It’s damn arrogant of the medical establishment to define the double-blind placebo-controlled, randomized clinical trial as “the gold standard of research,” given all the deadly drugs the FDA has approved based on such trials. Corporate biomedicine is corrupt. Their most prestigious journals are full of ghost-written papers, they exclude studies showing adverse effects. Honest anecdotal evidence is far preferable to superficial rigor.

As I write this at the winter solstice, the New York Times is belatedly informing readers that numerous, rock-solid studies point to Tylenol as a causal factor in asthma…Evidence Mounts Linking Acetaminophen and Asthma

But don’t let ‘em have any marijuana!

The Start of the Movement