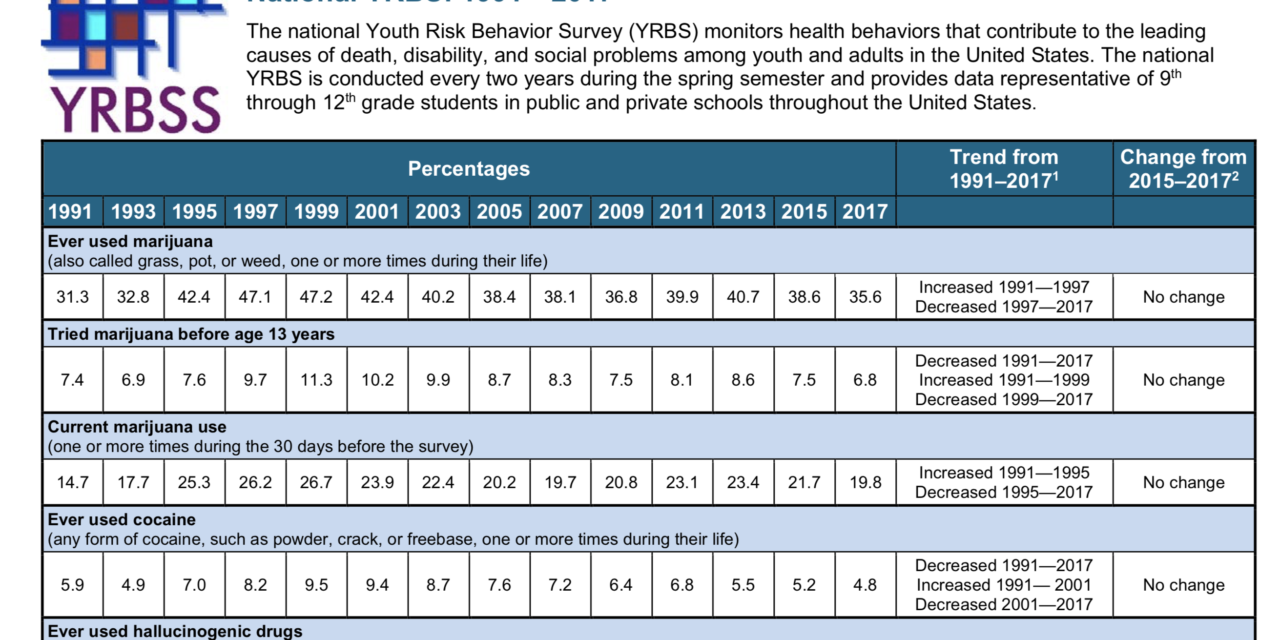 and neither do the editors of the New York Times. Consider this  article by Jan Hoffman about a report on the latest “Youth Risk Behavior Survey” released by the Centers for Disease Control and Prevention.

“Sex and Drugs Decline Among Teens, but Depression and Suicidal Thoughts Grow”

rests on the assumption that having sex and using drugs lead to —or are strongly associated with— depression and suicidal thoughts. Other odd assumptions underlie the CDC report itself and Hoffman’s account of it:

One in seven high school students reported misusing prescription opioids, one of several disturbing results in a nationwide survey of teenagers that revealed a growing sense of fear and despair among youth in the United States.

The numbers of teenagers reporting “feelings of sadness or hopelessness,” suicidal thoughts, and days absent from school out of fear of violence or bullying have all risen since 2007. The increases were particularly pointed among lesbian, gay and bisexual high school students.

“An adolescent’s world can be bleak,” said Dr. Jonathan Mermin, an official with the Centers for Disease Control and Prevention, which conducted the survey and analyzed the data. “But having a high proportion of students report they had persistent feelings of hopelessness and 17 percent considering suicide is deeply disturbing.”

And while we’re digging down for the real meanings… Hopelessness itself is a symptom of aimlessness. Chekhov said “a life without purpose is a bore and a horror.” Having hope means you have a chance to achieve something. Having an aim means you have a way to achieve something. We need an educational system that provides young people with the skills to do useful, meaningful work and a society that provides and supports useful, meaningful work.

Ms Hoffman employs a common but hitherto unnamed journalistic device —using the word “like” to conflate divergent people, places, and things—  that we hereby dub ‘The ‘Like Lasso:’

The report did offer some encouraging trends, suggesting that the overall picture for adolescents is a nuanced one. Compared to a decade ago, fewer students reported having had sex, drinking alcohol or using drugs like cocaine, heroin or marijuana.

Hoffman of the Times is simply echoing the CDC’s categorizations. Here’s her tribute to the intellectual integrity of the CDC surveyors:

Because this was the first time that the question about prescription opioids had been given, the researchers who compiled the report could not say whether the 1 in 7 (or 14 percent) figure represented an increase or decrease.

How scientific can you get?