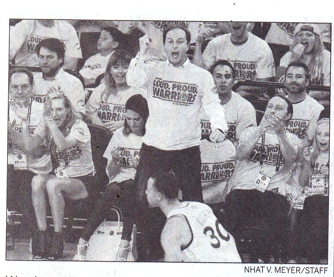 The lead story in the NYTimes Sunday Business section Sept. 6, while pretending to be fair and balanced, is strongly supportive of Joe Lacob and Peter Gruber’s  plan to build a 12-acre “entertainment complex” anchored by a stadium for your Golden State Warriors.  According to the obsequious reporter, one Matt Richtel, “Mr. Lacob made his money as a venture capitalist with Kleiner Perkins Caufield & Byers, all the while chasing his childhood dream of owning a sports franchise.”

Why did I think Joe Lacob’s childhood dream was to be a medical researcher?  Because of the following comments his son Kirk made to Tim Kawakami of the San Jose Mercury News:

“‘Last week we were at my brother’s graduation in St. Louis. My dad likes to tell the story, he applied to a lot of medical schools and he didn’t get into any.

He got wait-listed at one, and that was Washington University in St. Louis –that’s where my brother just graduated undergrad. My dad’s sitting there at the graduation, he looks at me, he goes, ‘Do you think they know they messed up?’

“He goes, ‘Do you think they know they messed up that I didn’t get in? What if I had cured cancer?’ This is the way he thinks; he’s sitting there, ‘They should know they screwed up; I should’ve gotten in here.’”

You can look it up: http://blogs.mercurynews.com/kawakami/2015/05/30/kirk-lacob-and-andrew-bogut-on-the-night-joe-lacob-got-booed-at-oracle-and-everything-that-came-next/

Lacob and Gruber bought the 12 acres from Marc Benioff, described in the Times as “the founder of Salesforce, a software giant and San Francisco mainstay.”

Quick —what sports franchise is Paris known for? Amsterdam? Copenhagen? Oslo?  Correct answers to four out of four get you free tickets to see U2.