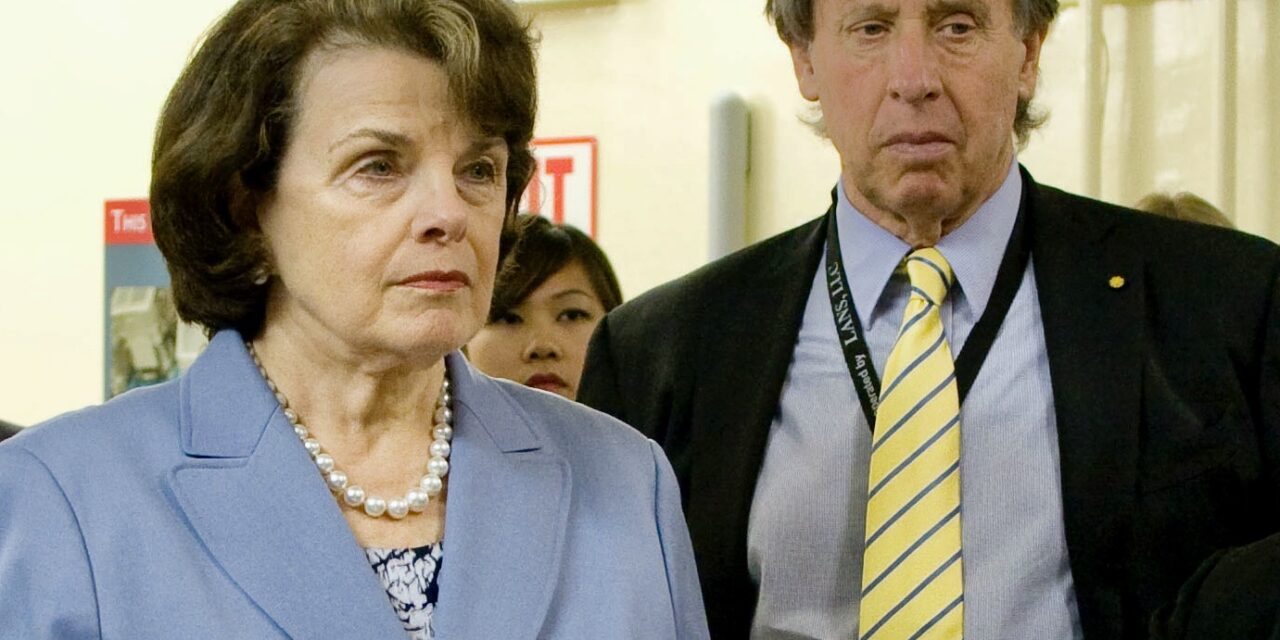 Trying to breathe life into the extinct mammoth known as Republicanus Liberalis, former Congressman Tom Campbell recently launched a start-up called the Common Sense Party. Campbell served five terms in the 1990s representing Silicon Valley. When he resigned in 2000 to run for the Senate against Dianne Feinstein, Kayo was keen to endorse him. I pointed out that Campbell was anti-union. “You don’t have to remind me,” Kayo said in annoyance, “Feinstein is 10 times worse.”* In an op-ed he didn’t want me to mess with, District Attorney Hallinan wrote:

“It has pained me, as a loyal Democrat, that our own Senator Diane Feinstein, a native San Franciscan, has always been among the most vociferous proponents of the drug war, which has produced death, disease, racism, corruption, crime and loss of rights. As the failure of the drug war becomes more evident and the costs mount, Senator Feinstein looks it in the eye and says, ‘Give me more.’

“Over the years she has favored or sponsored ever more repressive legislation aimed at punishing drug users. She routinely votes for such Draconian measures as expelling entire families from public housing for drug possession by one member of the household and barring federal student loans on the same basis. She has also voted for the death penalty for drug offenders including large-scale marijuana growers.

“Most recently, Senator Feinstein pushed, with Orrin Hatch of Utah, an anti-methamphetamine bill which, along with increasing penalties for methamphetamine manufacture and trafficking, would have completely abridged the First Amendment, particularly on the Internet. She also just voted for the ill-conceived ‘Plan Colombia,’ which wrong-headedly assumes we can reduce drug use in this country by taking sides in Colombia’s 40-year civil war.

“Four years ago, Senator Feinstein opposed Proposition 215 allowing medical use of marijuana, a measure later supported by 80 percent of our City’s voters… In sharp contrast to the Senator’s unreasonable and unyielding position in support of the drug war is that of her challenger, Rep. Tom Campbell of San Jose… Campbell spoke out against Plan Colombia, recognizing involvement in a civil war risks another Vietnam and at best will merely create new sources of drugs. He condemns mandatory sentencing and other prison-stuffing legislation, which siphons badly needed funds away from public education… Speaking out against the drug war is consistent with the historic role of the Bay Area as the leading edge of progressive social change in America.”

Sen. Feinstein was on her way to becoming a Forever Stamp and would not stoop to debate drug policy with a challenger. She dismissed Campbell’s position as “bizarre,” adding “Anybody who thinks you can rehabilitate somebody addicted to narcotics by giving them narcotics, they might as well be living on another planet.”

Dianne Feinstein is 86 years old but will never be 86ed from the Senate because almost 86 percent of California Democrats view her favorably. Readers of the Anderson Valley Advertiser might recall that  DiFi’s financier husband, Dick Blum, had a hand in the Headwaters/Maxxam rip-off of 1995. Today Blum is president of UC’s Board of Regents, a Billionaire with a capital B, more powerful than ever.

One morning in 2002 Kayo showed me a thin folder he had asked a lawyer in the Special Prosecutions unit to compile on Dick Blum. One of Blum’s firms, Newbridge Securities, was then handling more than $7 billion worth of clients’ funds invested in China. Maximizing trade with China was in their direct interests and Dick Blum’s —not to mention the missus. She at the time was vigorously pushing a scheme to pave over a square mile of San Francisco Bay (“it’ll probably turn out to be more land than that,” Kayo predicted) so that the airport could add two runways and add space between existing ones. Legally required “mitigation” for the environmental damage would be provided by a public-private partnership buying thousands of acres of the Cargill salt flats in the South Bay and sponsoring “wetland restoration.”

“Feinstein pretends she knows nothing about Dick Blum’s business dealings,” Kayo said. “That’s obviously not true, but corporate lawyers can set things up so that if she claims she never looks at certain tax documents, they can call it a bona fide arm’s-length relationship.” According to the file he gave me to peruse, the managing director of Blum’s Newbridge Securities was also a consultant to the state-owned Chinese shipping giant, Cosco, which had recently won rights to develop the decommissioned Long Beach Naval Station. Feinstein and Sen Barbara Boxer issued a statement saying the Cosco-run port would  create up to 1,600 jobs, generate $156 million in local wages, and should be green-lighted. Kayo said DiFi was greasing the skids for Cosco. There was an obvious conflict of interest but was there a crime he could prosecute?

One item in Kayo’s folder described BlumCapitalPartners’ near-monopoly grip on the “Smart Cartes” that passengers rent at US airports to schlep their luggage. In 2000, SFO —one of 54 airports at which Blum had the concession—took in $4.2 million in rental fees. International travelers were not charged for using luggage carts, but Blum’s firm got a 70-cent fee every time one did. No crime in owning Smart Cartes —just the meanness of late-stage capitalism, the monetization of everything, the constant petty chiseling of the American people. (Barbara Ehrenreich’s Nickel-and-Dimed came out in 2001.)

“Mr. Blum’s associates say he began doing business in China when Ms. Feinstein was San Francisco’s mayor in the 1980s,” according to a clipping from the Wall St. Journal that made Kayo scoff. “She set up a sister-city tie between San Francisco and Shanghai,” the WSJ item went on, “and made a friend in Shanghai’s mayor at the time, Jiang Zemin, now China’s president. Mr. Blum has disclosed little about his investments in China. Mr. Feinstein and her husband say they don’t share information.” To this day Feinstein’s conflicts of interest are blatant. She’s the senior Democrat on the Senate Appropriations Committee while Blum-controlled companies get multimillion-dollar contracts from the US military. But all is excused by her assertion that she is oblivious to her husband’s business dealings and an accountant’s assurance that certain tax documents are not comingled.

It was the great hurry to expand SFO that got Kayo’s attention. The City and County of San Francisco owns the airport. The Airport Commission was promising to restore 10 acres of wetlands for every acre filled in for runways. Their spokesperson, Kandace Bender (previously spokesperson for Willie Brown) announced that the City was negotiating for 3,300 acres on Skaggs Island, near Vallejo, and 500 acres on Mare Island to add to the mitigation package. Kayo reasoned that since the federal Fish & Wildlife Service had already taken steps to acquire and restore the Cargill salt ponds (with funding help from the state), no private funding was needed to complete the purchase. But if the Airport was part of a consortium that could meet Cargill’s terms immediately, they could claim that restoring the South Bay salt ponds to wetlands mitigated the damage done by paving over the square mile (or more) around SFO. “The Airport says they’re doing all this so that passengers won’t have long delays,” said Kayo. “That’s bullshit. It’s all about trade with China.” For sure the animosity between him and Diane Feinstein was personal; but their fight was political and, on Kayo’s part, principled.

Willie Brown was pushing as hard as DiFi for paving over the Bay. When SFO’s new international terminal opened in late November 2000, there was a grand-opening party that Brown used for lobbying purposes, according to an article by  David Aaron of the San Jose Mercury News: “…For Tuesday’s bash, the airport partitioned the terminal’s main hall into elegant dining rooms and cocktail lounges for 1,000 people —everyone from folks who helped build the terminal to former Secretary of State George Shultz… After dinner of filet mignon, entertainers included jazz bands and a team of acrobatic dancers suspended four stories in the air.

“Earlier this year, Brown proclaimed runway expansion one of the city’s top priorities and shuffled members of his administration to the airport to oversee the job. The prospect of filling 1,000 acres of bay for new runways has enraged environmentalists, however… ‘It’s absolutely necessary that the next step be to get everyone to agree on how important the runways are,’ Brown said. ‘This terminal is absolutely built for the future, the runways should be the same.’

Brown said runway expansion had the support of governor Gray Davis and United Airlines CEO Jim Goodwin. The Mercury News reported, “United is already on board with the mayor’s runway plans, Frank Kent, head of United operations at San Francisco Airport said. ‘Right now we are not even considering the possibility that new runways won’t be built,’ he said. Kent said he and others at the airline have mustered support throughout the business community for new runways in recent months… Brown’s team at the airport is preparing environmental impact reports and a half dozen concepts for runway expansion. Many speculate the airport will choose a design that calls for multiple runways jutting into the bay. “I want two but I’ll settle for one,” Brown said.

On July 21, 2002  the Chronicle ran a piece hedded “Feinstein adds salt pond purchases to Senate bill,” in which Jane Kay reported obsequiously, “A campaign to return miles of commercial salt ponds in San Francisco Bay into wetlands for wildlife is moving forward thanks to a deft stroke of legislative maneuvering. Sen. Dianne Feinstein, D-Calif, added a request to the Interior Department’s appropriation bill to include funds she hopes will swing a $100 million deal to buy 13,000 acres of Cargill Inc.’s salt ponds in the South Bay… The deal is in no way linked to the San Francisco International Airport’s attempts to expand runways into the bay and to buy the Cargill wetlands as mitigation for the environmental damage such an expansion would cause, said representatives for Cargill and Feinstein.”

Back at the DA’s office Kayo read the paper and said, “Mitigation is supposed to be for damage that can’t be prevented.” He was still looking for a prosecutorial angle to block airport expansion. But the meshuganah scheme would soon collapse on its own when the dot.com bubble burst.

• Quotes are close approximations from memory yet green or from notes made at the time.

Marijuana in the Mansion