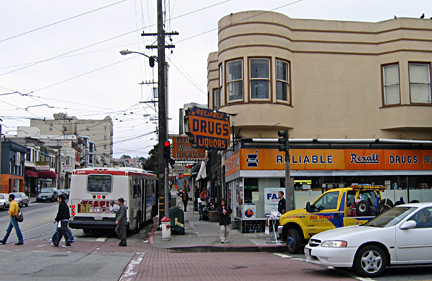 In 1960s Liverpool the Beatles serenaded Lovely Rita, but in Y2K San Francisco the city was choking with cars, tickets were costly, and outbursts of rage against Parking Control Officers were increasingly frequent. When a spate of attacks on PCOs attracted media attention in May 2000, District Attorney Hallinan asked me to keep tabs on cases the office was charging. The ‘Parking’ file came to include:

• PCO Marian Leonard saw Marcel Cooke. double-parked on San Bruno. Began writing a ticket. Cooke: “You better not put it on window.” She put it on. He hits her wrist with a cardboard box. Insulting remarks: “I’m gonna whip your fat ass… You fat fuck.” Spits on her. She maces him, calls SFPD. Set for jury trial June 23. Charge is battery. Offer of 30 days in jail or 45 in work program declined.  (Cooke would be cleared of battery but found guilty of resisting arrest.)

•  PCO Elias Georgopoulos was assaulted by a cab driver. The suspect physically bumped into Elias, pushing him back, grabbed at his wrist where he held the citation, threatened him and then backed up over his 10-speed bike. Elias keyed his microphone during the encounter so the Department of Parking & Traffic has the threats on tape and SFPD will obtain copies. Insp. Tomika in General Works has the case.

• PCO Marcus Tjon was assaulted, according to the SFPD Incident Report, after issuing a citation to a vehicle illegally parked in front of 460 Townsend St. “Two males exited from Kosman Office Supply to confront Tjon. Tjon stated that one of them, Ye, yelled and swore at him in English, saying ‘Fuck you , asshole.’ and ‘Do you want some?’ Each time, Tron replied, ‘Same to you.’ Ye then said to Tjon in Cantonese, ‘Do you want to fight?’ Tjon replied, ‘You know, I’m Cantonese, too.’ At this point Fitch came to the scene.

“Tjon entered his vehicle and started to drive Eastbound on Townsend. Tjon had driven no more than 10′ at a speed of 5-6 MPH when he heard an object strike the window on the left side of the vehicle. The vehicle was open and the object could have struck Tjon. Tjon turned and saw a round yellow object rebounding away from his vehicle. Both subjects then went back into 460 Townsend. Tjon then called for police assistance…Tjon pointed out the object to me, which I retrieved and found to be a soft yellow ball, approximately 3” in diameter. (In evidence.)

“Tjon entered his vehicle and started to drive Eastbound on Townsend. Tjon had driven no more than 10′ at a speed of 5-6 MPH when he heard an object strike the window on the left side of the vehicle. The vehicle was open and the object could have struck Tjon. Tjon turned and saw a round yellow object rebounding away from his vehicle. Both subjects then went back into 460 Townsend. Tjon then called for police assistance…Tjon pointed out the object to me, which I retrieved and found to be a soft yellow ball, approximately 3” in diameter. (In evidence.)

“Tjon demanded to make a citizen’s arrest. Ye was cited and released for violation of 415(b) challenging a fight in public. Fitch was transported to Co. B and booked. Fitch has a pending case (conspiracy to distribute cocaine) in federal court. Off. Miller notified federal agent Sylvia Lugo regarding this arrest.”

• PCO Maureen O’Brien was assaulted after she had just finished writing a citation for a vehicle parked in a bus stop. Maureen then proceeded a few blocks away and stopped to catch up on her paperwork. At this time the driver of the vehicle that was cited came up and started violently rocking Maureen’s vehicle back and forth, trying to tip it over and then came around to the open portion and spat in Maureen’s face. SFPD officers proceeded to the suspect’s house but she refused to open her door. Insp. Traine in Gen Works has case.

San Francisco parking control officers had been looking for a case to publicize their plight, and the image of Gracey —an eighth degree black-and-red belt whose Gracie Jiu-Jitsu Academy ran TV ads— abusing Latif seemed made to order. More than two dozen PCOs attended the preliminary hearing and high-fived one another when Superior Court Judge Mary Morgan held Gracey over for trial on two felony charges —assault with intent to cause great bodily harm and assault on an officer performing their duties. Jaxon Van Derbeken of the Chronicle wrote, “Gracey’s attorney, Omar Figueroa, said Latif had exaggerated his injuries. He noted that Latif had told police that he had been hit or punched seven times, but during his testimony, he cut the number to three. He also said Latif applied for, but was denied, permanent disability after the incident…  Outside court, Figuroa was confident.’Mr. Gracie will be completely exonerated,’ he said.”

Van Derbeken also quoted me stating the SFDA party line: “No one who attacks a parking control officer should expect leniency from the District Attorney.” But the charges against Gracie would be reduced to misdemeanors after Serra’s associate Larry Lichter convinced Kayo that Latif had exaggerated his injuries.

The honchos and the rank-and-file at DPT were upset. With Kayo’s approval (“Just say it was your idea, not mine”) I called Stuart Sunshine to suggest a reform that would solve the problem of assaulted PCOs. DPT should change its protocol so that a PCO could tear up the ticket if an irate citizen showed up while s/he was still on the scene. “They could feed their meter or move their car,” I pointed out to Sunshine. He countered that if civilians knew PCOs had the power to tear up a ticket, “It would make the situation worse.” I could have asked his reasoning but didn’t. DPT was bringing in more than $30 million-a-year for the City and County of San Francisco.

Omar Figueroa —a graduate of Yale and Stanford Law School— went on to become a formidable defender of marijuana growers and sellers, a contributor to O’Shaughnessy’s, and an Anderson Valley Advertiser advertiser. His office is in Sebastopol.  The nature of his practice —like most but not all the California “pot lawyers” from 20 years ago— changed from criminal defense to business consultation. Figueroa’s website says, “We help clients obtain local permits and state licenses; draft, negotiate and review contracts; protect intellectual property; establish corporations; ensure compliance; advocate for a friendlier legal environment; and more.” Figueroa is the author of several books on California’s ever-changing “regulatory landscape.”

“Numerous vehicles get towed improperly by garage operators, resulting in consumer complaints to the District Attorney’s Office. The proposed legislation —a collaborative effort between the DA’s office and Supervisor Leno— will require all parking locations in the city to maintain foolproof revenue-control equipment that provides receipts to customers.

“The legislation also addresses the problem of uncollected parking tax revenue. Drivers who park at garages in the city pay a 25% sales tax that historically has been under-reported by the garage owners, who have opposed stringent revenue-control requirements. The new legislation calls for state-of-the-art revenue control equipment that cannot be tampered with successfully.

I drafted a quote for Terence that he didn’t appreciate: “Infractions are crimes. There’s something odd about the San Francisco budget depending on its citizens to commit $35 million worth of crimes per year.”

Instead, the press release ended, sensibly, “‘The city has a right to its revenue,’ said District Attorney Hallinan, ‘and consumers have a right to a receipt.'”

An Inside Job at DPT

Phil Matier and Andy Ross shared the byline for many years on a widely read San Francisco Chronicle column focused on local politics. (Matier is now a solo act.) Ross phoned one day in October 2000 to ask what charges the DA was filing against Leslie Mohacsy, a machinist employed by Parking & Traffic who had used a duplicate key to steal money from the meters. I assumed that Ross had a tip from someone who didn’t think the charges would be severe enough.

Kayo told me to discuss the charging decision with Chuck Haines, who he had made chief of the General Litigation unit. Kayo said that Haynes, who had been at SFDA since 1981, was a very skilled lawyer who had been held back from advancement by a subtle but strong anti-gay prejudice. What follows is the note I typed as Haines filled me in:

“Arraigned today. Pleaded guilty. Charged with possession of stolen property, petty theft, possession of burglary tools, and tools for a coin-operated machine. All misdemeanors. Pretrial conference 10/30. No prior record, he’s one year short of retirement. Early admission of guilt. Says first time he ever did it. He stands to lose his retirement benefits. Not caught in the act. Less than $400 in his possession (the cut-off on petty theft.) $114 in wrappers, $43.75 on a towel. Lawyer wanted diversion. We’re going to keep him from getting diversion. Faces a year in county jail. Police had option of putting him under surveillance to build a bigger case, but didn’t. ‘I would have charged this as a felony if I had grounds.'”

The Matier & Ross headline   —”Slap on the Wrist in Meter Thefts has Hands Wringing”— ran across a page of the Chronicle Oct. 18. “What really has irked officials,” they wrote “is the district attorney’s decision to slap Mohacsy with misdemeanor charges rather than felonies.”

Terence promptly wrote a letter that the Chronicle ran on Oct. 20, explaining, “Mr. Mohacsy was seen stealing from a single parking meter. He claimed it was the only one he had stolen from. The $159 in change he possessed was consistent with this sum. Although I have strong feelings regarding the seriousness of stealing from The City, I am required by law to charge only what I feel I can prove beyond a reasonable doubt. In this case it was petty theft.  Petty theft is a moral turpitude offense in California and Mr. Mohacsy will face losing his city pension whether he is convicted of either petty or grand theft. I feel that is appropriate, but the issue did not enter into our charging decision in any way.”

PS April 23, 2001:  An SFDA press release quoted Terence Hallinan: “I believe the governor has made a brilliant choice in appointing Chuck Haines to the Superior Court bench. Chuck is a career prosecutor whose fairness and compassion are respected by everyone in the Hall of Justice.”

PPS: August 3, 2020:  Landlords and real estate companies had sued the city in June, claiming the moratorium on evictions enacted by the Board of Supervisors was constitutional overreach. “Judge Charles Haines flatly disagreed,” the Chronicle reported,” ruling that the ordinance, authored by Supervisor Dean Preston, ‘is a permissible exercise’ of the city’s power to regulate evictions ‘to promote public welfare.’ He also ruled that the law did not conflict with state emergency orders, as the landlord and real estate groups contended.”

Kayo would have been proud. Let the record show that many of the prosecutors whose careers Terence Hallinan advanced went on to do the right thing (when they could). He was wrong about Kamala Harris, alas, but most of the lawyers he employed and promoted proved worthy of his support. He knew that his legacy would be a function of their work as much as any of the programs he created to counter mass incarceration.