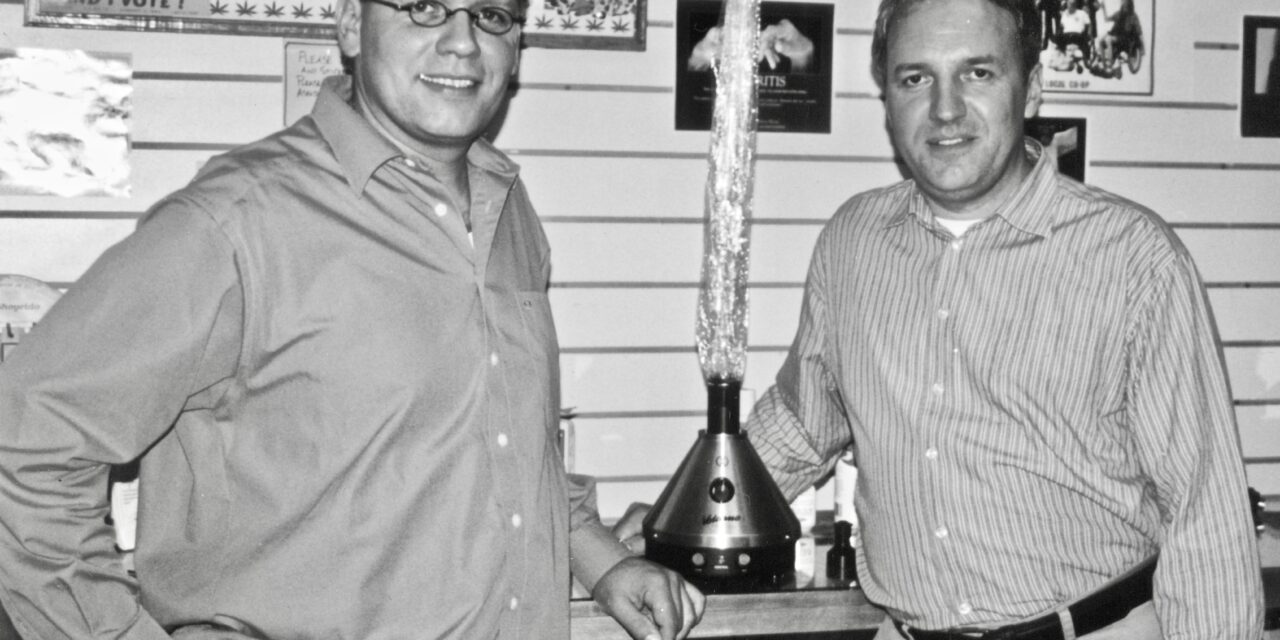 By Fred Gardner in O’Shaughnessy’s, Spring 2004

Doctors who recommend medicinal cannabis advise their patients that vaporization is a safer delivery method than smoking. When cannabis leaves and flowers burn, they release toxins —napthalene, benzene, toluene, polynuclear aromatic hydrocarbons, and other substances that insult the lining of the throat and lungs. But vapors released at temperatures below the burning point contain cannabinoids —the medically effective components of the plant— minus most of the toxins.

Some flavorful molecules evaporate, too, at a point below combustion. [PS 2019. I failed to note the beneficial role of the “flavorful” terpenes. —FG]

Markus Storz is an inventor from Tuttlingen, Germany —a town famous for the manufacture of precision medical instruments. His “Volcano” vaporizer consists of an electronic heating element and an air pump inside a cone-shaped stainless steel housing about 9 inches in diameter and 8 inches high. It is designed to apply a precise level of heat to a precise area —a thimble-sized strainer in a black plastic cylinder— that snaps onto the neck of the top of the unit.

A balloon (a polyester oven bag, actually) attached to a quick-release mechanism snaps onto the top of the chamber. The user sets a dial to the desired temperature (180-190 degrees centigrade for cannabis), and after a few minutes a light on the console indicates that the proper level has been reached. A button is pushed to start the pump, which forces air through the heated herb, capturing its evaporated components and wafting them into the balloon.

The filled balloon unsnaps from the heating chamber and snaps onto a mouthpiece/valve that does not allow any contents to be released until it is depressed —i.e., until the user directs a stream of vapor into his or her mouth.

Thanks to the valve design, the Volcano’s balloon can retain vapors for intermittent inhalation. The manual suggests that the potency of the vapor begins to diminish within a half hour, but one fan of the Volcano claims she can prepare a balloon at bedtime for use in the morning, without noticeable loss of efficacy.

Volcano advocates say the device enables them to use cannabis more efficiently, i.e. to consume less overall, after they have mastered the technique. “Using small amounts of bud, on the dry side and ground medium-fine, is most efficient,” according to David Moore, who runs a dispensary in San Francisco that sells Volcanos at a discount.

Moore is an ardent admirer of Storz and his invention. After first seeing one in the summer of 2002, he headed for Germany to pay his respects and to see if Storz wanted a business partner. Storz had just taken on a partner, Jurgen Bickel, but he was a gracious host and Moore has fond memories of spending several days hiking in the green German countryside with him.

“The company was, and remains, a very small, hands-on operation,” Moore reports. “Markus is a craftsman with the highest standards. That won’t change as the demand rises and they gear up to produce more.”

“You really have to learn how to use the Volcano,” according to Moore. “The ideal setting seems to be ‘6’ for most people (190o. centigrade). Lower you get the flavor, but not the medicinal effect. Higher is too harsh.”

Moderate inhalation is recommended. “You can take the slightest sip,” says Moore, “and taste the subtle flavors of whatever strain you’re using. It’s surprising how flavorful and potent the supposedly lower-grade strains can be when inhaled through the balloon.”

Flavor, Moore notes, is a function of terpenes, flavonoids and other components of the cannabis plant, not THC and the other cannabinoids.

Because the Volcano is expensive —up to $600 at retail outlets, and even more through www.storz-bickel.com— some consumers buy just the valve set and use a heat gun to achieve the desired temperature. Some stores even sell a sleeve designed to fit over the barrel of a heat gun and receive the Volcano’s filling chamber. “The heat gun is a lot more portable than the Volcano,” notes another store proprietor.

Moore counters: “With a heat gun you’re breathing hot air and whatever toxins come off the heating element. The Volcano is a precision medical instrument, you don’t have to worry about overheating or safety issues. Markus chose all his materials with inhalation in mind.”

Moore has been selling the Volcano “at a slight loss” to promote use among his patrons at Mendocino Healing Alternatives, which is off Howard St. between 11th and 12th in San Francisco (96 Lafayette St., 415-864-4600).

Storz and Bickel rationalize their pricing structure with a quote from John Ruskin: “There is hardly anything in the world that someone cannot make a little worse and sell a little cheaper, and the people who consider price alone are that person’s prey… When you pay too much, you lose a little money —that is all. When you pay too little, you sometimes lose everything, because the thing you bought was incapable of doing the thing it was bought to do.” 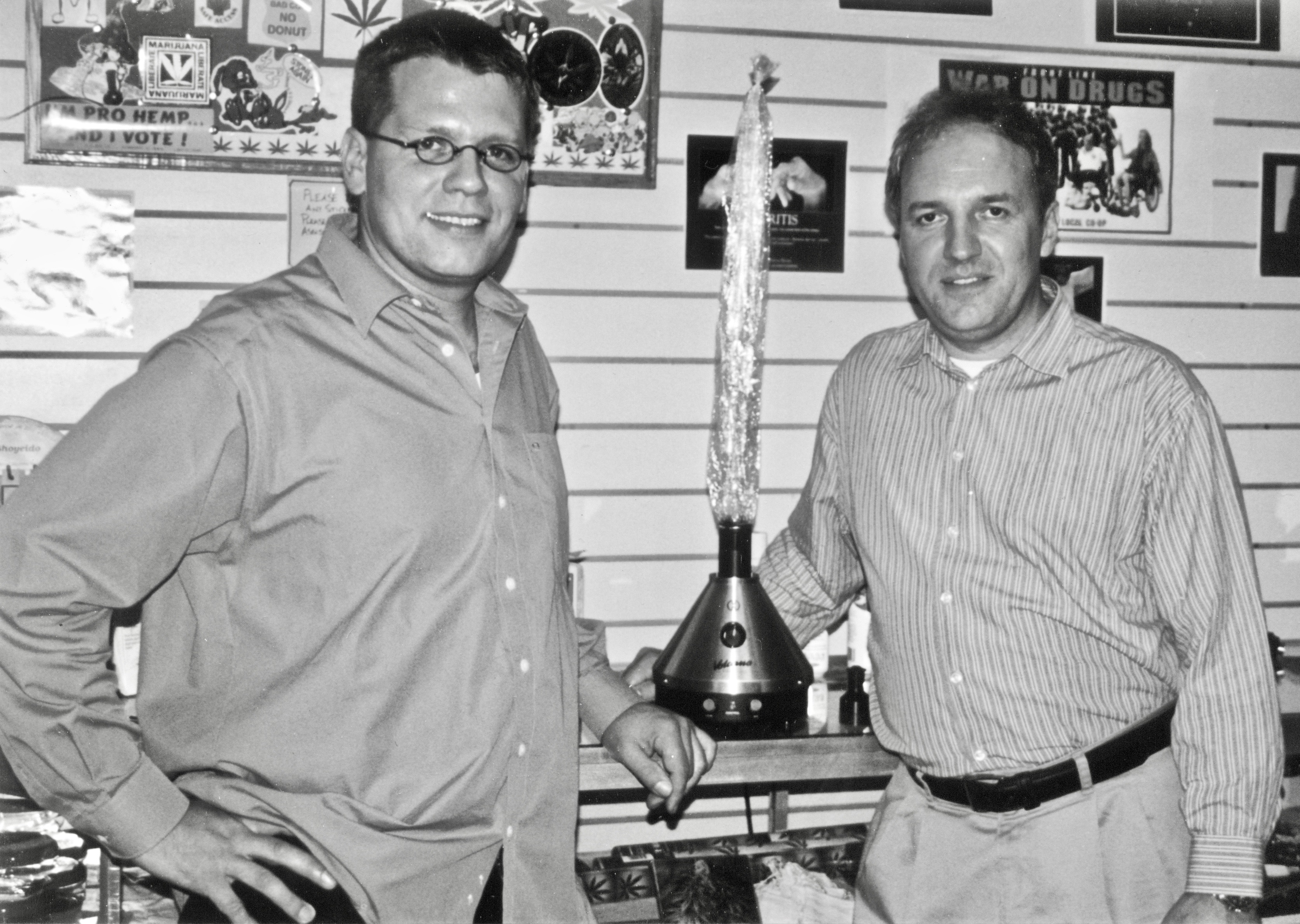