Jeffrey Hergenrather, MD, attended a rally for Bernie Sanders in Cloverdale Saturday and sent us some pix. 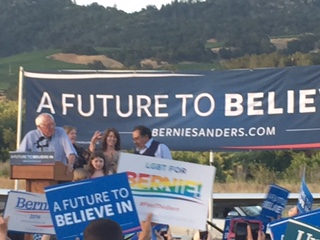 There is all the difference in the world between Sanders’ call for descheduling marijuana and Hillary Clinton’s willingness to move it from Schedule 1 to Schedule 2 (alongside the truly addictive synthetic opioids, fentanyl, hydrocone, vicodin, etc. that have caused an epidemic of overdose deaths). Schedule II drugs are defined as having a high potential for abuse that can lead to dependency and addiction. Marijuana addiction is a medical disorder, according to the American Psychiatric Association, in the same category as opioid addiction. Marijuana on Schedule II justifies an ongoing role for law enforcement under California’s looming legalization measure. Unimpaired workers who test positive for THC metabolites can still get fired. And  marijuana users who don’t want or need treatment will be court-ordered to do so. Removing marijuana from the Controlled Substances Act —Sanders’ approach, descheduling— is the prerequisite to real legalization.  First acknowledge no harm.

Panzer on the Riverside Ruling