The Man in the Picture With Robert Mueller III 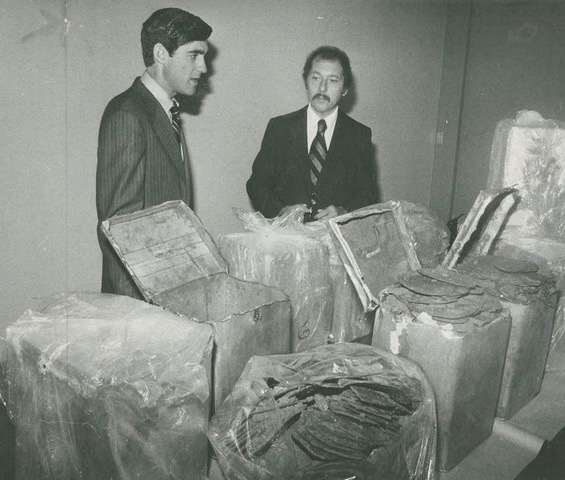 Chris Conrad emailed this 1978 photo of Assistant US Attorney Robert Mueller III gazing impassively at 574 pounds of confiscated hashish in Concord, California. Conrad commented: “Who would think that, 37 years later, this guy would end up being one of our best remaining hopes for the US’s political survival?”  (Not I.)

The man in the photo with Mueller is Dan Addario, who in 1978 was Special Agent in charge of the DEA’s San Francisco office. Some 17 years later, when Terence Hallinan became District Attorney of San Francisco, he named Addario as chief of the Investigative Division. Some of Hallinan’s allies were aghast, but Terence thought that Addario having the job would confuse his enemies and remind law enforcers that there might be employment opportunities on our side.

On November 5, 2001 the fifth anniversary of Prop 215,  Dan Addario joined pot partisans at a rally protesting the federal government’s ongoing efforts to dis-implement the law.

Pot partisan Wayne Justmann speaking on the steps of the Hall of Justice. To his right in photo is SFDA Chief Investigator Dan Addario. Note Tod Mikuriya, MD, at left in photo, documenting the event by videocam. Also in BG, attorneys Dale Shafer and Matt Kumin.

Hallinan’s message to the Bush Administration was “Restraint is in order.” This is the text of his speech:

Exactly five years ago today California voters passed the medical marijuana initiative —Proposition 215. In the intervening years, tens of thousands of patients have used marijuana medically with a doctor’s approval. Countless thousands of seriously ill people have gotten relief from pain and nausea; marijuana has enabled them to eat and to hold jobs and to function.

None of the dire consequences predicted by the opponents of Prop 215 have come to pass. In other words, the experiment has been a success in those counties where Prop 215 was implemented.

But the Bush Administration wants to end it. In recent weeks the DEA has raided a dispensary in Los Angeles and a doctor’s office in El Dorado County, and there is reason to believe that more raids are coming. Medical marijuana users in San Francisco —who include a large number of people with AIDS— are extremely concerned that their access to a medicine they rely on might be cut off. It is on their behalf that I am appealing to DEA Administrator Asa Hutchinson, and to President Bush, to rethink any campaign against medical marijuana in California that may now be underway.

I ask them to put it on hold at least until the current federal case against the Oakland Cannabis Buyers Co-operative has been resolved in the courts.

The media have conveyed the impression that the Supreme Court in May somehow overruled Prop 215; that’s not what happened. The legality of Prop 215 was not an issue. The Court simply held that the common-law doctrine of “necessity” is not a defense to the federal Controlled Substances Act. The Oakland case has now been remanded to the 9th Circuit Court of Appeals for consideration of Constitutional arguments. Let’s see how it plays out in the courts.

I ask the Bush Administration to not constrain California doctors from recommending Cannabis to their patients, and to not deprive patients of their right to obtain and use cannabis as permitted under California law, at least until the Oakland Co-op is allowed to make its constitutional arguments.

I ask this is in the spirit of bipartisanship and national unity as our country deals with murderous assailants. It seems like very little to ask. Medical marijuana users are not criminals in California and shouldn’t be turned into criminals. The law of the state should be honored.

I’m going to introduce Dr. Molly Fry, who came in today from El Dorado County to describe how the DEA raided her clinic and her husband’s law office, confiscating thousands of patients’ and clients’ records. Then we’ll hear from Supervisor Mark Leno, who this afternoon is going to introduce a resolution to the Board reiterating San Francisco’s support for medical marijuana.

Dale Gieringer of California NORML is on hand to answer any questions about the raid on the Los Angeles Cannabis Resource Center. Dan Addario, the chief investigator in my office, who was a career DEA agent, will explain why he thinks law enforcement should not waste its resources going after marijuana.

Below are two more shots of the rally. I don’t know who took them In the color photo featuring Mark Leno, the man in sunglasses in the back row is Gary Johnson. He had helped run the San Francisco Cannabis Buyers Club and been active in the Prop 215 campaign. When the marijuana policy honchos started talking up New Mexico Gov. Gary Johnson for President, Dennis Peron would refer to his friend as “our Gary Johnson” or “the real Gary Johnson.”   Their Gary Johnson got the Libertarian nomination for president and turned out to be a goofball. By the end of the campaign his sensible running mate, William Weld of Massachusetts, had to accompany and answer questions for him. —F.G. 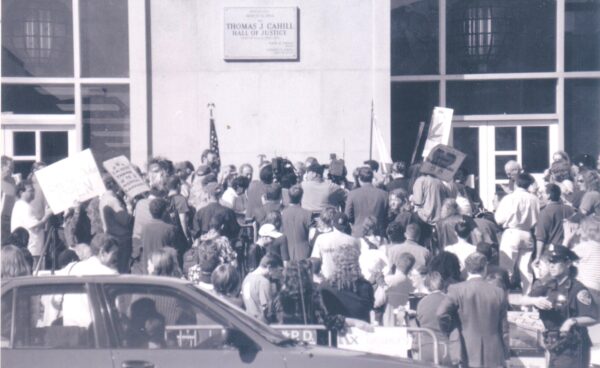 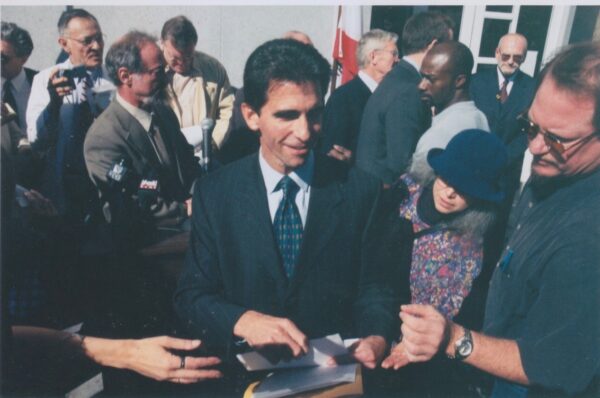 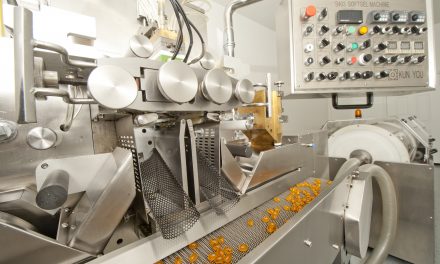 The Takedown of Care By Design