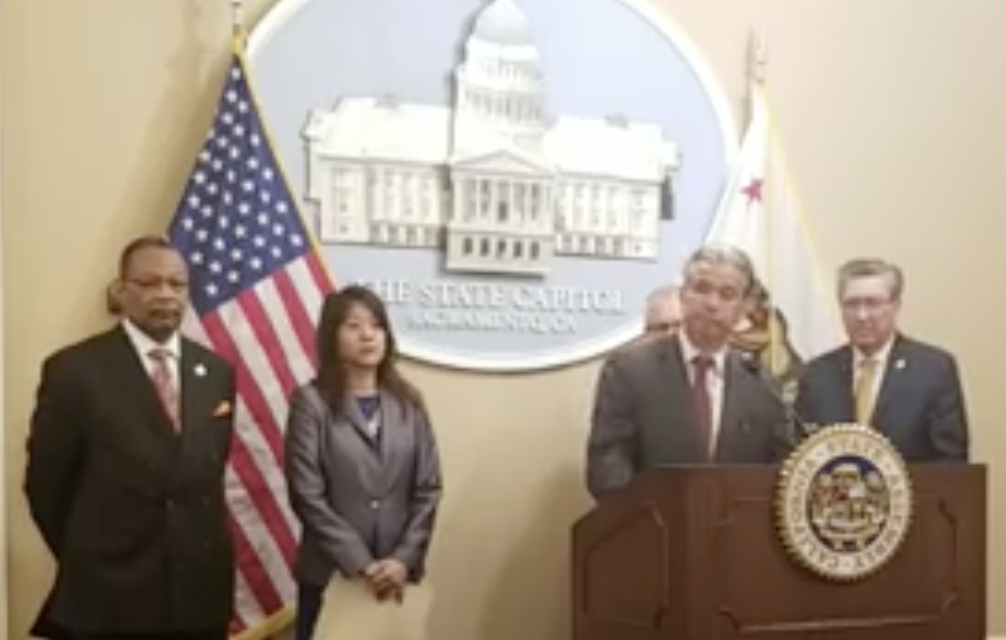 At a January 27 press conference in Sacramento, Assemblyman Reggie Jones-Sawyer (D-Los Angeles) revealed the scope and mechanics of a planned crackdown on the underground marijuana market. The “pro-cannabis” legislators intend to spend $100 million to revive California’s Bureau of Narcotics Enforcement and sic ’em on the underground growers and distributors. The BNE is the very agency that raided Dennis Peron’s San Francisco Cannabis Buyers Club in August 1996, at the height of the Prop 215 campaign. In 2011 the BNE was folded into the California Bureau of Investigation under Attorney General Kamala Harris.

Assemblyman Rob Bonta (D-Alameda)  and State Treasurer Fiona Ma had summoned the media to plug the “Temporary Cannabis Tax Reduction bill (AB 286),” which will, for three years, reduce the excise tax from 15 percent to 11 percent and suspend the cultivation tax ($9.25/oz of bud).

The state took in $101 million less than expected in taxes from the cannabis industry in 2018, not because their projections were wrong  but because “the black market continues to undercut businesses that are complying with state regulations and doing things the right way,” said Bonta. “AB 286 will temporarily reduce the tax burden on these licensed operators.”

Politicians named Lackey and Cooley reiterated the need for the bill.  “The illicit market is dominating the cannabis industry,” said Lackey.” These are people who are bad actors. We need to give the good guys a chance to succeed. This bill will take the money out of the illegal market.”

There are undoubtedly some “bad actors” who are growing and selling cannabis without permits. But there are many more well-intentioned growers and vendors from the “traditional market” (the term favored by Erik Sinclair of Stuff Stoners Like) who simply could not raise the hundreds of thousands of dollars needed to start a legal cannabis business in California. Legality has been conferred on those with sufficient capital. The rich/poor system is called capitalism for a reason.

It was Assemblyman Jones-Sawyer, co-author of AB-286, who revealed the crackdown plan. Maybe he was veering off-message when he said:

“In the city of Los Angeles we have about 170 licensed cannabis businesses and over 17 hundred illegal black market businesses that are competing with the legal ones. We need to be actively helping the 170. Hopefully, we’ll talk about some other programs and some other things where we can shut down a lot of these the illegal ones. But AB 286 is definitely a good start at helping this industry thrive.

“Last year we came up with a proposal in the budget to come up with 75 million to restart the Department of Narcotics Enforcement in the Attorney General’s office. It wasn’t funded. What my colleagues are talking about this year —I’m hoping we’re going to ask for 100 million or more because we believe we have to have a strong enforcement centralized agency out of the AG’s office to coordinate all the law enforcement operations throughout the state the same way they did before it was disbanded years ago. They were very effective at getting rid of— (corrects himself)  at reducing the amount of heroin and cocaine that were going on in the state. We think they can be very effective doing the exact the same thing that they did before, only addressing the issue of cannabis operations.”

Jones-Sawyer’s revelation of a plan to resurrect BNE has been totally ignored by the media, while Bonta has reaped praise for slightly —and temporarily— reducing the outrageously high excise tax. Bonta is a very  articulate, Yale-educated politician, nimble enough to maintain a progressive image while gifting $100 million  to Law Enforcement for a crackdown on cannabis. 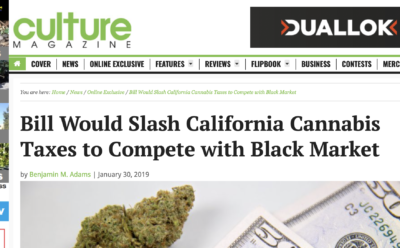 Here’s video of the press conference. The money shots start about 11 minutes in:  https://www.facebook.com/CaliforniaSTO/videos/2322182941347066/
And here’s a piece from O’Shaughnessy’s noting the BNE’s role in taking down the San Francisco Cannabis Buyer’s Club.
Jones-Sawyer made much of AB-286 being a “tax break” for compliant businesses. No one asked, “What other medicine is taxed at 11 percent?”
Here’s an answer from James R. Dumler’s blog, salestaxsupport.com. As of 2015:

There are only two (2) states which currently tax prescription medicine: Illinois and Georgia.

In every other state, prescription medicines are exempt from tax.

States in which OTC medicine is  tax-exempt:

OTC medicine is generally tax-exempt in the following eight (8) states/jurisdictions:

The following states have enacted qualified exemptions for OTC medicines: