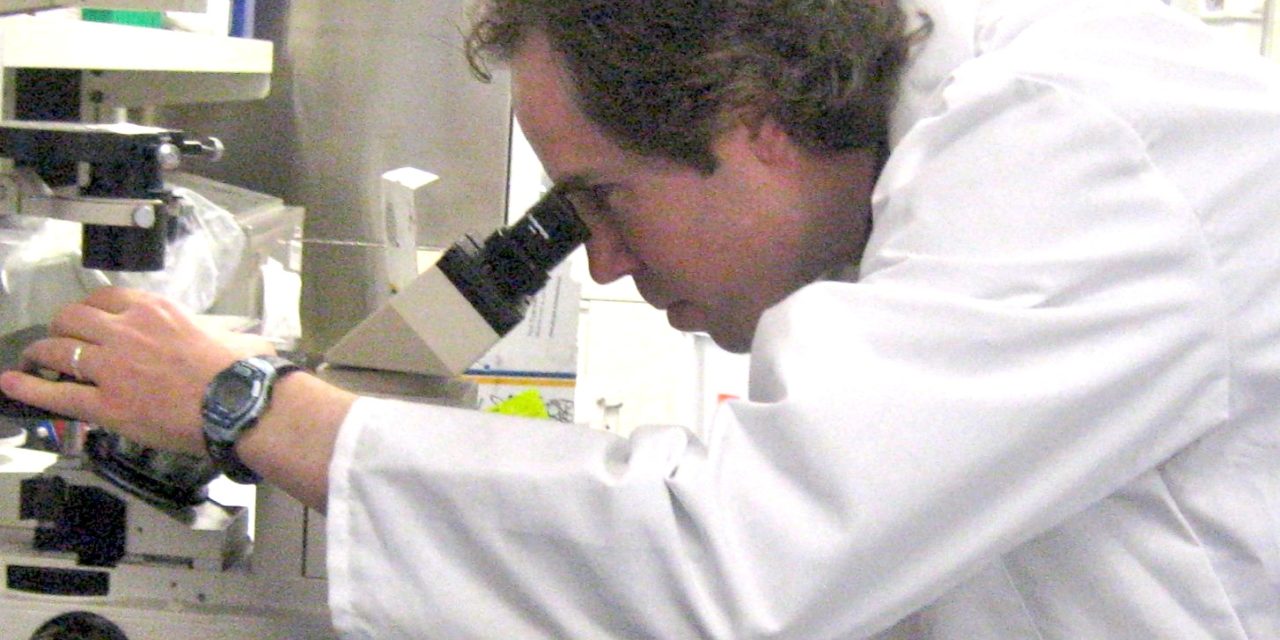 When California Pacific Medical Center took a half-page ad in the San Francisco Chronicle to announce a public forum on October 7, 2008, it may have been the first time in history that a hospital pitched its cannabinoid research program to prospective patients. “From Water Bottles to Marijuana Derivatives,” the text called out, “Latest Discoveries about Breast Cancer.”

The ad convinced about 100 women and a few men to skip the second Obama-McCain debate on TV and attend the CPMC forum. William Goodson, MD, gave a brief talk advising his listeners to avoid carcinogens in the environment –a difficult task, given the quality of our air and water. Goodson singled out Bisphenol A, a hormone-disrupting chemical that can leach out of plastic in water bottles, baby bottles, and the lining of “tin” cans. Glass makes the safest container, he said.

“Marijuana derivatives” referred to work being done by two PhD biologists, Sean McAllister and Pierre Desprez, who have been testing pure, synthetic Cannabidiol (CBD) as a treatment for breast cancer. McAllister said that clinical trials could begin in two years if all went well. He emphasized that CBD is non-toxic and has no known adverse effects: “That’s a really nice starting point when you’re tryng to inhibit cancer,” he said. Many of the women in the audience were all too familiar with the miserable effects of chemotherapy and radiation Many had used marijuana to fight nausea and restore appetite.

Desprez had spent more than a decade studying metastasis, the process by which cancer cells escape from a primary tumor and seed secondary tumors at different sites in the body. He found that cells in aggressive tumors –unlike cells in tumors that remain localized– express large quantities of a gene called Id-1.
The normal role of the Id-1 gene is to promote the rapid development and differentiation of embryonic cells; by birth these genes have switched off. But in metastatic cancer, the Id-1 gene somehow reactivates and directs cells to grow and travel throughout the body. Desprez calls Id-1 “the orchestra conductor” of this process.

Desprez proposed [Coppe et. al., 2004, Clinical Cancer Research, v10, 2004-2051] that clinicians might use Id- 1 level as a “diagnostic marker” to indicate the extent to which a cancer has spread. (When cells are not expressing Id-1, the patient can be advised that the tumor is less likely to spread. When cells are expressing high levels of Id-1, treatment can be planned accordingly.)

These questions led Desprez to collaborate with McAllister, a CPMC Research Institute colleague who had been testing CBD for anti-cancer effects and reported promising results. McAllister and Desprez observed the effect of CBD on aggressive cancer cells as the cells chewed through an extracellular matrix in a Petri dish. (The cancer cells are trying to reach nutrients on the other side, just as they would try to reach nutrients in the bloodstream by chewing through tissue in the body.) Assays showed that the presence of Id-1 gene diminished as more CBD was applied –and fewer cancer cells survived and invaded.

McAllister said at the breast cancer forum that Id-1 appears to promote the invasiveness of many types of cancer, and treatment with CBD might be a gen- erally effective way to switch it off.

In late April O’Shaughnessy’ s visited McAllister at his lab at the CPMC Research Institute, which is in a renovated industrial building South of Market. He expressed hope that the federal government’ s stimulus package might improve his chances of getting a grant from the National Institutes of Health to keep testing different combinations of cannabinoids –and other components of the plant– as anti-cancer agents.

McAllister: We’re about to publish the results of the work we’ve done in vitro, combining THC and CBD against glioblastoma multiforme, an aggressive form of brain cancer. We found a synergistic increase in the ability of the compounds to induce apoptosis –programmed cell death. That finding is going to be presented at the ICRS [International Cannabinoid Research Society] meeting. I was quite surprised at how well the combination worked. Now we’re trying to get the funding to do the experiment in vivo.

I proposed to look at many different combinations. I started with THC and CBD because they’re the most abundant. We found that in two out of three ag- gressive brain-cancer cell lines that we looked at, when you added CBD at a lower concentration than THC, we saw a synergism in terms of its ability to in- duce cell death.

O’S: What was the most effective ratio of THC to CBD?

McAllister: About fourfold less CBD than THC. This occurred in more than one cell line. And we have discovered a molecular mechanism that may explain why if you add THC and CBD together, they might synergize.

O’S: Could you explain the mechanism?

McAllister: There is a family of signaling proteins called mitogen activated kinases (MAPK). These proteins control cell growth and survival. Depending on how they function, they can either stimulates cell growth or, if you stimulate them for too long in cancer cells, you can cause the cells to undergo programmed cell death, which is a desirable property in a cancer drug. We found that when you add either compound at lower concentrations alone you produce either no effect or marginal effects on certain MAPK. But when you combine them, you get a pretty dramatic change that leads to increased cell death and reductions in proliferation.

This ties in a little to Guzman’s work. [A 1998 paper by Manuel Guzman and colleagues documented the anti-cancer effects of THC and inspired McAllister to test other cannabinoids for similar effects.] He showed that modulation of MAPK was essential for THC’s ability to increase cell death. So we’re carrying on with that story and looking at the different components and seeing which can help. Which fits in with the theory that the endogenous cannabinoids have an “entourage effect.” One compound is not the whole story.

We really want to follow up in vivo now. We have access to actual primary brain tumors from patients –not just cell lines that have been passaged for a long time. The problem with cell lines can be that when you passage them for years and treat them with semi-artificial high-serum and all the things that you do in cultures their genetic profile can change so that they’re not the same as the original primary tumor.

But now we have techniques where you can actually take the tumor out of the patient and keep it under conditions where years down the road it would have the same genetic profile as the original tumor. Which gives you a real model to test the efficacy of whatever treatment you’re testing.

The in vivo work we’ve done so far looks promising in regard to CBD being able to inhibit metastasis. And now we’re going to combine it with THC. It makes sense to attack cancer with multiple types of treatments that target different pathways. That’ s a classical approach with cancer treatments.

O’S: At the forum you said you had begun using a mouse model.

McAllister: We use a mouse model of aggressive breast cancer. We treat the mice every day with a very reasonable concentration –5 milligrams per kilogram [of body weight]. We inject it –systemic administration. These mice get a primary tumor in the breast and just like the common human progression, after a certain amount of time it metastasizes to the lung. We find that if it we treat it with the drug, you get significantly less metastasis to the lung.

O’S: Are you still on track to have clinical trials in less than two years?

McAllister: STI pharmaceuticals is talking to clinics in the UK that do these kind of trials. They’re looking at the data. Yes. We’re definitely getting closer.

O’S: Who has the IND [license to conduct the trial] in the UK?

McAllister: STI pharmaceuticals. That’s where we’re thinking the trial will be.

O’S: Women in California will be disappointed.

McAllister: We’re going to try and do a parallel trial here as well. I don’t think it will be a problem.

McAllister: I need to collect data for about another six months to a year and talk with physicians in order to propose a trial design. I have questions with re- gard to dosing. In the model we’ve been using, the mice have a functional immune system. Vincenzo Di Marzo’s group did a study using a human cell line with a compromised immune system. I’ve read reports of CBD modulating the immune system, which raised some concerns. I want to try a couple of different dosing schedules. Do we want to give these patients a systemic dose every three days? Every four days? Would oral administration be effective? It is difficult to truly extrapolate between mice and humans but we need more detailed in vivo data before we can proceed. O’S: Who provides your CBD?

McAllister: NIH. They synthesize it.

O’S: You know that a high CBD strain has been located in California.

McAllister: I have a DEA license here and I’ m working towards getting standardized plant extracts from Arno Hazenkamp in the Netherlands to test. It’s always been my goal to work with extracts. But it’s not easy to find a place to give you extracts with quality control. To do an experiment in a sound, scientific manner you have to know exactly where the material’s coming from, and its make-up. There’s so much to learn about how these components interact. It was just a few years ago that they found CB-2 agonists in terpenes. And there’s probably even more structures in the extracts that might modulate the activity, depending on whatever physiological effects you’re looking for.

O’S: How do the cannabinoids exert their anti-cancer effects?

McAllister: In the breast cancer model, CBD appears to target two ma- jor pathways, resulting in modulation of MAPK and an increase in production of reactive oxygen species. Both changes lead to damaging effects in cancer cells. That’s different than in the brain tumor model where the majority of the drug’s effect is inducing cell death. With breast cancer it looks like there are two primary pathways.

O’S: If and when high-CBD strains become available to cannabis users in California and people start using it for various reasons –with or without input from their doctors– is there a downside, a danger to that?

McAllister: Yes. I’ve actually seen this in my in vivo experiments. There’s definitely a specific dose-response oc- curring with CBD. If you’re too low or too high you won’ t see an effect. Y ou need to be within specific therapeutic window. If the treatment is not formu- lated and you don’t really know what dose you’re getting, you might not see any effect.

O’S: If somebody’s using high-CBD cannabis for, say, spasm, they could titrate and figure out an effective dose – two puffs, or three, or four…

O’S: I’ve heard it suggested that the placebo effect itself might involve the endocannabinoid system.

McAllister: Why not? When it came to reduction of pain, the placebo effect involved the endorphin system-this sys- tem was discovered through research on opiates/opium. So why couldn’ t the placebo effect for spasticity involve the endocannabninoid system? It makes sense. And there’s nothing wrong with the placebo effect. But for cancer it’s going to be important to have the correct dosing schedule. 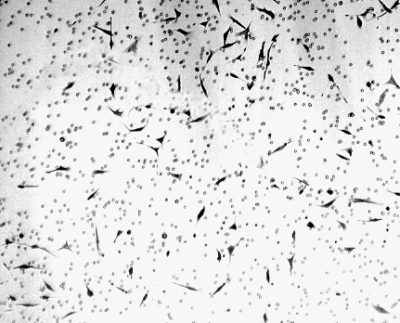 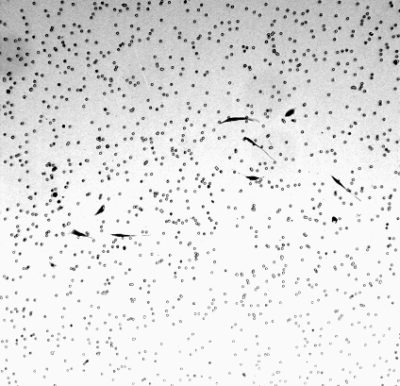 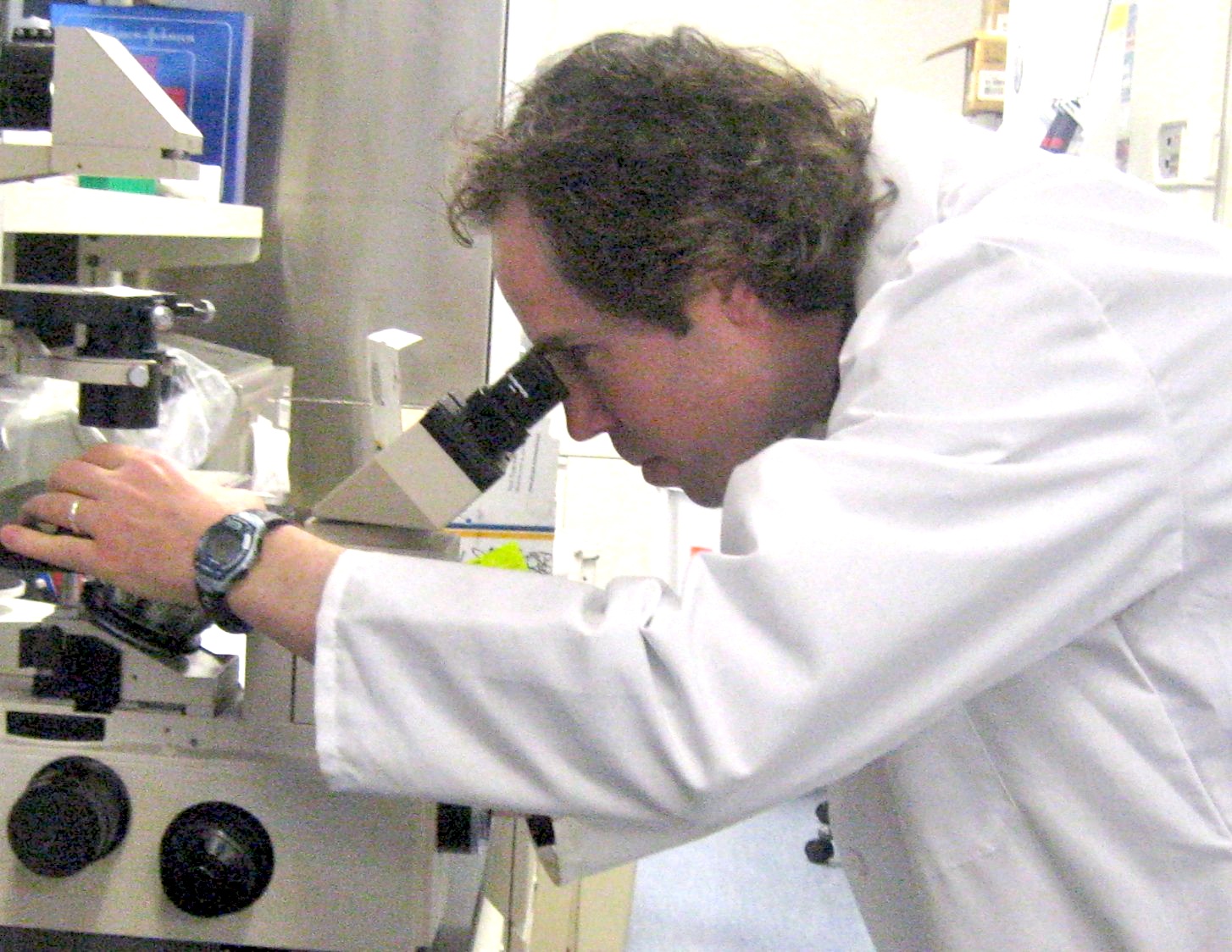 GGRESSIVE BREAST CANCER CELLS lose ability to invade through an extracellular matrix. Cells at left are untreated controls; at right are cells treated with CBD. Invasive ability is an indication of the cells’ metastatic potential in the body. Photomicrographs by Sean McAllister