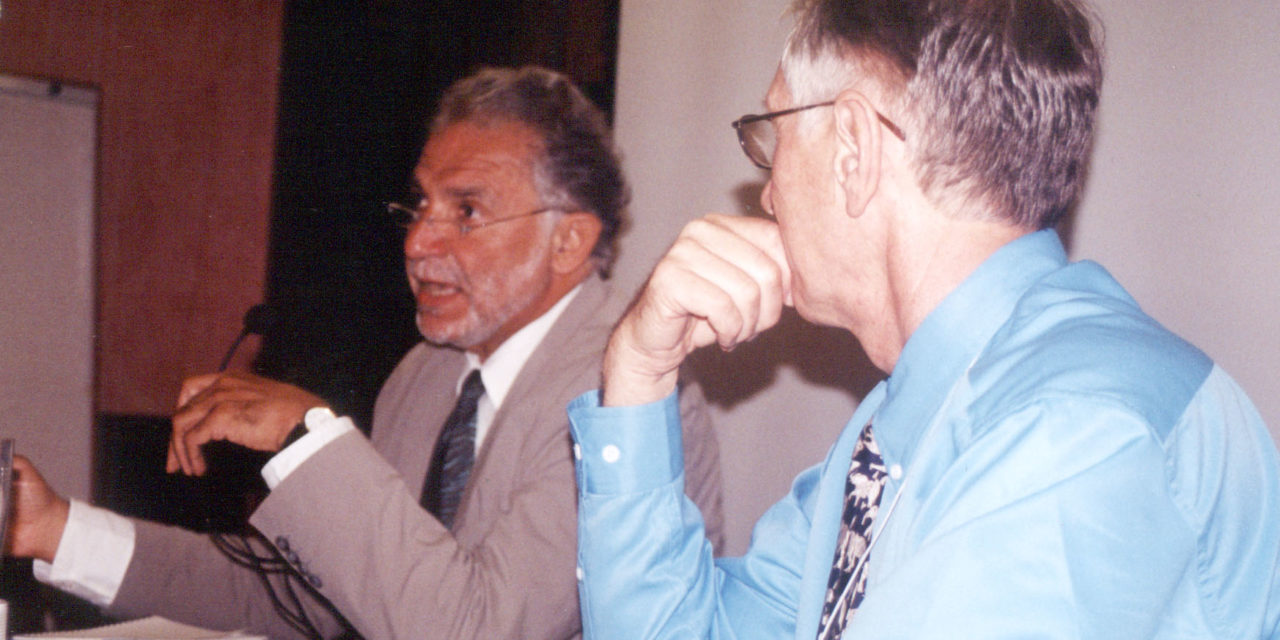 Did the directors of the University of California’s Center for Medical Cannabis Research violate their basic mandate by arranging a one-day symposium in Paestum, Italy?

The event, entitled “Future Directions in Cannabinoid Therapeutics II: From the Bench to the Clinic,” was held on June 27, the day after the International Cannabinoid Research Society’s annual meeting. Participants included many prestigious scientists —Raphael Mechoulam, Roger Pertwee, Raj Razdan, Alexandros Makriyannis, Daniele Piomelli, Cecilia Hillard, Vincenzo di Marzo, Ester Fride, Natsuo Ueda, Jun Fu, George Kunos, Geoffrey Guy, and others— who had no idea, presumably, that the session was unauthorized by the people of California.

The CMCR was created by the Marijuana Research Act of 1999 and received a total of $8.7 million from the California legislature between 2000 and 2002. The CMCR staff solicited proposals and gave grants to 18 scientists to conduct studies, some of which won’t be completed until 2006. The staff designated funds to pay themselves and to keep the Center, which is at UC San Diego, in operation through that year.

Additional funds have been sought from foundations, the federal government, and private-sector drug companies —as authorized by the Marijuana Research Act. CMCR co-director Drew Mattison says that no state funds were spent on the “Cannabinoid Therapeutics” session in Italy or a previous one that CMCR arranged after the 2002 ICRS meeting.

Mattison contends that the CMCR is mandated to concern itself with the development of synthetic drugs —including “antagonist” drugs that block the cannabinoid receptor system— by a line in the Marijuana Research Act that refers to “alternate means of administration.”

Wouldn’t most Californians assume the reference was to vaporizers, tinctures, and other alternatives to smoking —not brand-new molecules?

The CMCR conference was not publicized in advance and as of this writing is not reported on their website. Your correspondent first heard about it as the ICRS meeting got underway from Dr. Sumner Burstein, a Univesity of Massachusetts medical school researcher who has developed a synthetic drug, ajulemic acid (named after his granddaughters) that activates the cannabinoid receptors. Burstein said that a drug company called Indevus was testing AJA as a treatment for pain, and that promising results would be reported at “the meeting on Sunday.” (The ICRS program ran through Saturday.) He said he hoped I would cover it.

Next evening two California doctors, Jeffrey Hergenrather of Sebastopol and R. Stephen Ellis of San Francisco, were seated at dinner with Mattison, who revealed that CMCR had organized a meeting on Sunday for companies developing drugs they hoped to test and market in the U.S. Mattison said it was “by invitation only,” and he did not extend an invite to the California docs. They, being gentlemen, did not protest.

The following afternoon I encountered Mattison outside the lecture hall and told him that Burstein had invited me to the CMCR session. He said that “since there had been so many complaints,” he’d been forced to “open it up” on a first-come, first-served basis to 20 more participants. I could get in if I showed up early enough.

I asked Mattison if the CMCR might find a way to provide analytical-lab services so that California patients, doctors and growers could identify the composition of the plants they were using and begin to duplicate, however crudely, the G.W. approach to research. “The hills are full of Burbanks,” said I. “If only they had access to an analytical lab, they could begin to develop strains with different cannabinoid ratios that patients could use to treat various conditions, and doctors could monitor the results.”

Mattison exuded impatience and disapproval. Instead of responding, he said “Gerard might be starting his talk” and scurried into the hall where Gerard Le Fur of Sanofi was about to describe the effectiveness of a cannabinoid-antagonist drug in treating obesity. [See related story on page 1.]

The CMCR Sunday conference was held at the Ariston Hotel, same as the ICRS meeting. Some 20 distinguished scientists sat around tables with nameplates, microphones, water, gift notepads, etc. Tables had been added for another 20 auditors. Breakfast and lunch were provided.

At least five people from UC San Diego were involved in the production —Mattison and co-director Igor Grant, staffer Heather Bentley, a grad student and a distraught technician who kept scurrying along the floor trying to get the mikes to work and/or stop screeching.

The talks devoted to antagonist drugs seemed furthest afield from what the CMCR was created to do.

The program was organized into four sections: “Cannabinoid Agonists,” “Cannabinoid Antagonists,” “New Trends in Cannabinoid Therapeutics,” and “Cannabinoid Drug Development.” The talks devoted to antagonist drugs —which work by blocking the body’s cannabinoid receptors— seemed furthest afield from what the CMCR was created to do. One paper, by Carl Lupica of NIDA discussed antagonist drugs as “potential treatment” for food, alcohol and nicotine cravings. “It is also clear that marijuana craving may be successfully treated by this drug,” according to Lupica.

Our concern is not that the CMCR honchos used California taxpayers’ money to organize and stage a “cannabinoid therapeutics” conference in Italy —they say they didn’t and we’re not going to ask to see anyone’s time cards. Our concern is that the program itself violated the CMCR’s reason for being, which was and is to study “marijuana,” not ajulemic acid or any other synthetic cannabinoid, let alone antagonist drugs.

How did it come to pass that research into the safety and efficacy of smoked marijuana got transmuted into studies involving synthetics?

The Marijuana Research Act of 1999 was introduced by State Sen. John Vasconcellos explicitly in response to the passage of Prop 215. Enacted as Senate Bill 847, it authorized the UC regents to create a “Marijuana Research Program… (to) develop and conduct studies intended to ascertain the general medical safety and efficacy of marijuana and, if found valuable (sic), shall develop medical guidelines for the appropriate administration and use of marijuana.”

SB-847 refers to “marijuana” as it was and is being used by Californians under Prop 215 —in other words, the plant. “The crude plant,” that grows in the crude soil and that we, the crude people, voted to legalize for medical use.

The statute says, for example, “Proposals shall contain procedures for outreach to patients with various medical conditions who may be suitable participants in research on marijuana…”

And “Proposals shall contain protocols suitable for research on marijuana…”

And “Studies conducted pursuant to this section shall include the greatest amount of new scientific research possible on the medical uses of, and medical hazards associated with, marijuana…”

And “The marijuana studies shall employ state-of-the-art research methodologies.” And so forth.

Most of the original CMCR study protocols involved smoked marijuana. How did it come to pass that research into the safety and efficacy of smoked marijuana got transmuted into studies involving synthetics?

A key step was the selection of UC San Diego, where the influence of the medical marijuana movement was almost nil, to be the headquarters, and Igor Grant ­­—a major recipient of NIDA funding throughout his career— to be the director.

Whereas SB-847 had called for “Marijuana Research,” the UC center changed its name to ‘Cannabis’ (Latin being so much classier than Mexican). The launch was accompanied by a self-congratulatory mission statement that seemed more concerned with fellow bureaucrats than the people of California:

“The Center for Medicinal Cannabis Research will conduct high quality scientific studies intended to ascertain the general medical safety and efficacy of cannabis and cannabis products and examine alternative forms of cannabis administration. The center will be seen as a model resource for health policy planning by virtue of its close collaboration with federal, state, and academic entities.”

Had the CMCR been based at UC San Francisco, its operation might have been monitored by doctors and cannabis-using patients who want and need studies relevant to their own situation. Who is better positioned than the CMCR to collect data on the conditions that Californians have been treating with cannabis? Who is better positioned to analyze and provide data on the strains being used in the here and now? A director whose ambitions were on the clinical rather than the research side of medicine would have promoted such studies.

Instead we have Igor Grant and Drew Mattison “bringing together the major stakeholders in the development of cannabinoid therapeutics,” as their conference abstract book put it, “to survey the laboratory compounds that are most promising for testing in human trials, confront potential stumbling blocks to testing and development of these compounds, and identify opportunities for progressing (sic) new compounds to clinical readiness.”

Another factor that might make “new compounds” seem more amenable to study than smoked marijuana is the difficulty that CMCR researchers encountered recruiting human subjects. In one egregious case, a study designed for 56 patients had signed up only one after almost a year of trying. Given that high-grade cannabis is available to patients in California under Prop 215, why would AIDS and cancer patients volunteer for studies in which they receive low-THC cannabis from NIDA, or —even worse— a placebo?

Although the Marijuana Research Act directs CMCR to conduct studies with federally grown marijuana, it provides a loophole. “If federal agencies fail to provide a supply of adequate quality and quantity… the [state] Attorney General shall provide an adequate supply pursuant to Section 11478.”

The federal agencies have indeed failed to provide marijuana of adequate quality —which is why CMCR studies couldn’t entice enough test subjects—but Mattison and Grant never asked the state attorney general to supply medicine comparable to what Californians are growing in their own gardens.

Mattison rejects the notion that the quality of NIDA’s marijuana has dissuaded people from enrolling in CMCR’s clinical trials. “Our participants have never held that belief,” he said in a post-conference interview. “Our participants have not complained about potency except about it being too potent. Some experienced psychoactive effects before they experienced pain relief.”

Mattison and CMCR Project Manager Heather Bentley have visited the farm in Mississippi where NIDA-licensed marijuana is grown, and report that sticks and seeds are now being removed on a conveyor belt. Mattison says that NIDA”can provide marijuana blended for increased potency,” and did so for at least one CMCR study. He adamantly defends his efforts to build alliances with federal agencies and pharmaceutical companies.

Bentley also had an answer to our complaint about CMCR’s failure to track which conditions Californians are actually using cannabis to treat. “We didn’t have any applications for such a study,” she said.

But surely if they can take the initiative to arrange a “Cannabinoid Therapeutics” conference in Italy, they could suggest that a California researcher get the basic facts on medical marijuana use in the state. Or the CMCR staff could do it themselves, as an-in house project, while they’re holding the fort through 2006.

Belated Heads-Up: A Most Informative Meeting 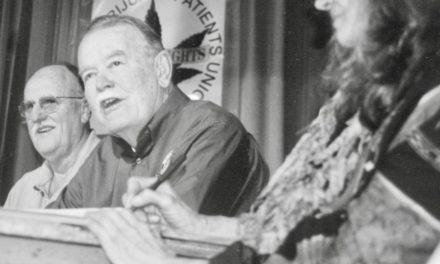