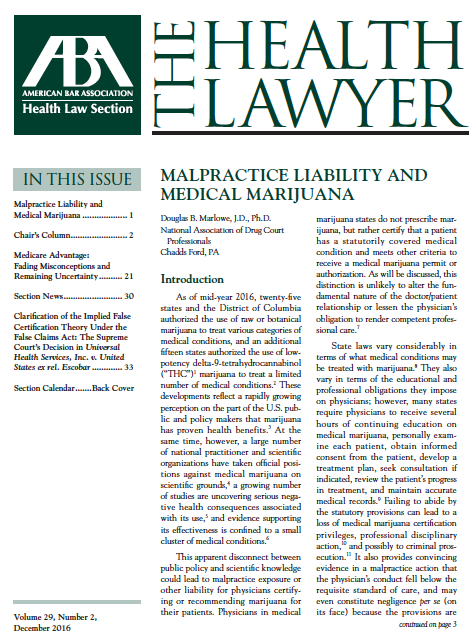 Thanks to Dr. Barth for sending this article from the December 2016 issue of “The Health Lawyer,” a newsletter published by the American Bar Association: Malpractice Liability and Medical Marijuana   Here’s a brief excerpt with a significant sentence in boldface:

“Physicians may still be sued for malpractice even if they follow the statutory provisions meticulously. Physicians are often sued for malpractice for treatments that are unquestionably lawful and authorized by applicable licensing and regulatory statutes. The dispositive question in malpractice cases is not whether the physician’s actions were legally authorized but whether they were performed in accordance with professional standards of care.13 No published court opinion has thus far considered the issue of malpractice liability for a physician certifying or recommending the use of medical marijuana. Although there are numerous instances of consumers being injured by other types of botanical products and herbal remedies, most law suits related to those substances have been product liability actions against the distributers or manufacturers of the products.14 Medical marijuana raises different legal issues from prior cases because patients are usually required by law to receive a physician’s approval to use the drug, whereas other herbal products can be obtained readily without physician involvement. In the absence of analogous legal precedent, courts confronting medical marijuana cases will in many respects be writing on a blank slate.”

So, 21 years after California passed Prop 215,  and with more than a million US patients authorized to medicate with cannabis, there is no precedential case concerning malpractice by a clinician!   The absence of litigation must mean something…. Very little harm caused to the users? Gratitude to the physicians who conferred legitimacy? No medical literature setting forth practice standards that a physician allegedly violated?

The Medical Board of California made Judge NAME’s ruling in the Mikuriya case precedential, as reported here by Frank Lucido, MD. There were no allegations of harm made against Dr. Mikuriya, in fact there were no complaints against him from patients. The complaints triggering an investigation of his practice had all come from law enforcement. The investigation revealed inadequate record-keeping on Mikuriya’s part (an intentional decision to protect his patients in the danger-fraught years after Prop 215 passed).