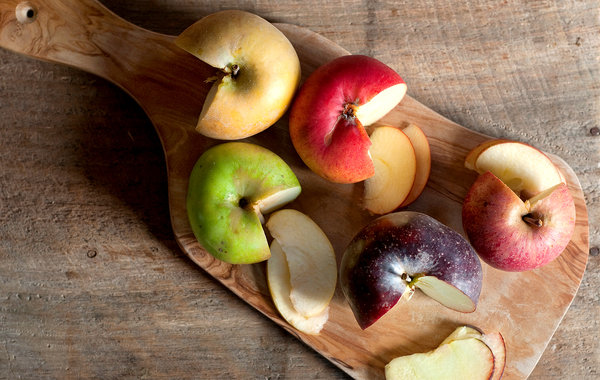 There’s a fine piece by Ann Raver in a recent edition of the New York Times about a New Hampshire apple grower named Michael Phillips who’s hip to the importance of terpenes (and many other things about how to grow plants). Raver explains…

In July and August, when the females lay their eggs, Mr. Phillips sprays the trunk with a neem oil solution that contains a compound called azadirachtin, which suppresses molting. If an insect can’t shed its skin as it grows, it dies. Neem oil also deters insects from feeding and laying eggs. Chemical companies have isolated the compound to manufacture patented products like Neemix or Ecozin. But those extractions “lose the other constituents of the plant,” Mr. Phillips said.
For instance, pure neem oil, he said, has terpenoid compounds that help the neem tree combat disease. Apple trees have the same terpenoids, so they respond to the oil.

Mr. Phillips sprays his trees at various stages: when the buds are “quarter-inch green,” as orchardists say, then when they are pink and then when the petals fall. These are the times when pests like moths and curculios feed on the tender flowers, and when fungal diseases like scab and cedar apple rust settle onto leaves and stems. “By spraying, I’m stimulating the terpenoids in the apple tree,” he said. “And boosting its immune system.”

The lead article in the current issue of O’Shaughnessy’s summarizes evidence presented by Ethan Russo, MD, that some of the so-called “minor cannabinoids” and aromatic terpenoids—compounds other than THC— influence the therapeutic effect of cannabis.