March 9   A front-page article  in the New York Times was given a rare two-sentence headline.

Back in November 2014 Mayor Bill de Blasio and Police Chief William Bratton announced that possession of less than 25 grams of marijuana would henceforth result in a summons, not an arrest. At that time, the NYPD had been humbled, slightly, by the murder of Eric Garner. Then the maniac from Baltimore killed two officers and the police brass —and the union that calls itself a “Benevolent Association”— began attacking the mayor without restraint.

Now, according to the Times, Chief Bratton is blaming marijuana for a rise in homicides:  “The seemingly innocent drug that’s being legalized around the country… In this city, people are killing each other over marijuana,” says the chief.

Excerpts from the Times piece by David Goodman and Matt Flegenheimer follow:

…The Police Department began focusing intently on the connection between marijuana and gun violence late last year and in early January, as Mr. Bratton sought to understand why shootings in the city were on the rise, said Stephen Davis, the agency’s top spokesman. An analysis of known motives behind the gunplay showed a connection to the drug, he said, and Mr. Bratton began talking about it in early February, at a news conference on monthly crime statistics.

His appearance last week was the second time he highlighted the connection, and he and his top officials did so vigorously, returning to the issue several times over the course of the news conference.

Marijuana was the motive behind at least seven killings in the first two months of this year, all of them violent robberies of drug dealers, according to one chart of homicide statistics. That number was unchanged from the same period last year.

“We just see marijuana everywhere when we make these arrests, when we get these guns off the street,” Mr. Bratton said at the news conference. The drug, he added, is “an influence in almost everything that we do here.”

Which makes you wonder how much real work the NYPD will have to do if and when we ever really achieve legalization and marijuana ceases to be worth its weight in gold. 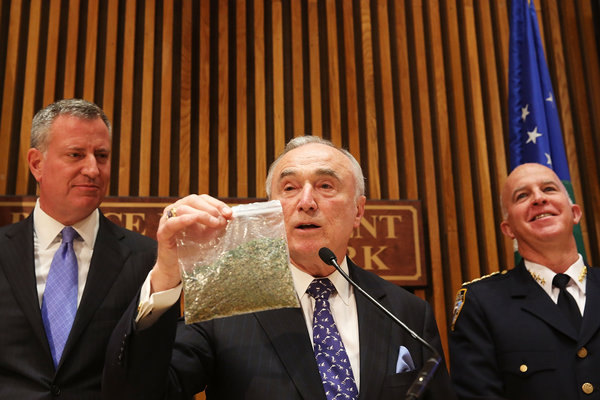 At a press conference in November, Police Chief William Bratton displayed a baggie of pretend marijuana (oregano) to show the amount a New Yorker could possess and face only a summons. Mayor Bill de Blasio tried not to smirk.  At right NAME AND RANK TK couldn’t help but smile (which would be unthinkable if the baggie contained pretend cocaine). Just about everybody knows that marijuana isn’t really dangerous.