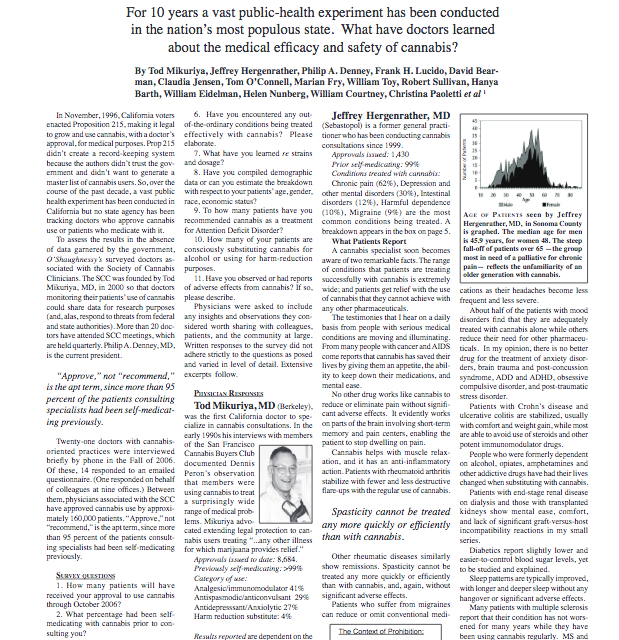 Below is a press release sent out September 20 by Perry Solomon, MD, via “PRNewswire,” to announce that Amanda Reiman, PhD, will analyze HelloMD’s 100,000-patient database to determine “how cannabis may affect the patient’s use of opioids,” among other things. We welcome the news, of course —the more confirmation the better— but we think we already know the outcome. Doctors in the Society of Cannabis Clinicians have been reporting for many years that pain patients with access to cannabis reduce their use of opioids by 50%, on average, and many quit opioids altogether. And as Tod Mikuriya, MD, used to observe, “Neither cannabis nor human physiology have changed that much over the centuries.”

Here is Dr. Jeffrey Hergenrather’s response to a follow-up survey. The SCC President wrote in 2009 that cannabis “is adequate for pain control for the vast majority of patients. About seven percent of my chronic pain patients remain opiate dependent. The trend is for patients to gradually reduce and omit the use of opiates in favor of cannabis.” We expect Amanda Reiman to come to a similar conclusion based on the HelloMD data.

This is the release from PR Newswire yesterday:

HelloMD, a leading digital healthcare platform for medical marijuana patients, announced today they are launching the largest patient survey concerning pain, opioid use and cannabis ever performed. Performed in collaboration with University of California Berkeley, HelloMD will ask 100,000 of its registered participants questions regarding cannabis and how it has affected their use of opioids. The company is following up on their landmark “Medical Marijuana Patient Survey Results” study of 17,000 patients, conducted in January 2016

“Opioid use and overdose statistics are staggering and should bring pause to every American,” said Dr. Perry Solomon, Chief Medical Officer of HelloMD. “In partnering with the University of Berkeley, along with other esteemed colleagues, we hope to better understand how and why these dependencies are coming to be and how cannabis may affect the patient’s use of opioids, among many other findings needed to help curb this epidemic.”

“It is imperative that we investigate alternatives to opiates for the treatment of pain. Cannabis has been used for thousands of years across cultures. There is no reason to exclude it from treatment options, and even less of a reason to discriminate against those who choose it as the best treatment for themselves.”

The study is expected to be completed later this year with results published in early 2017.