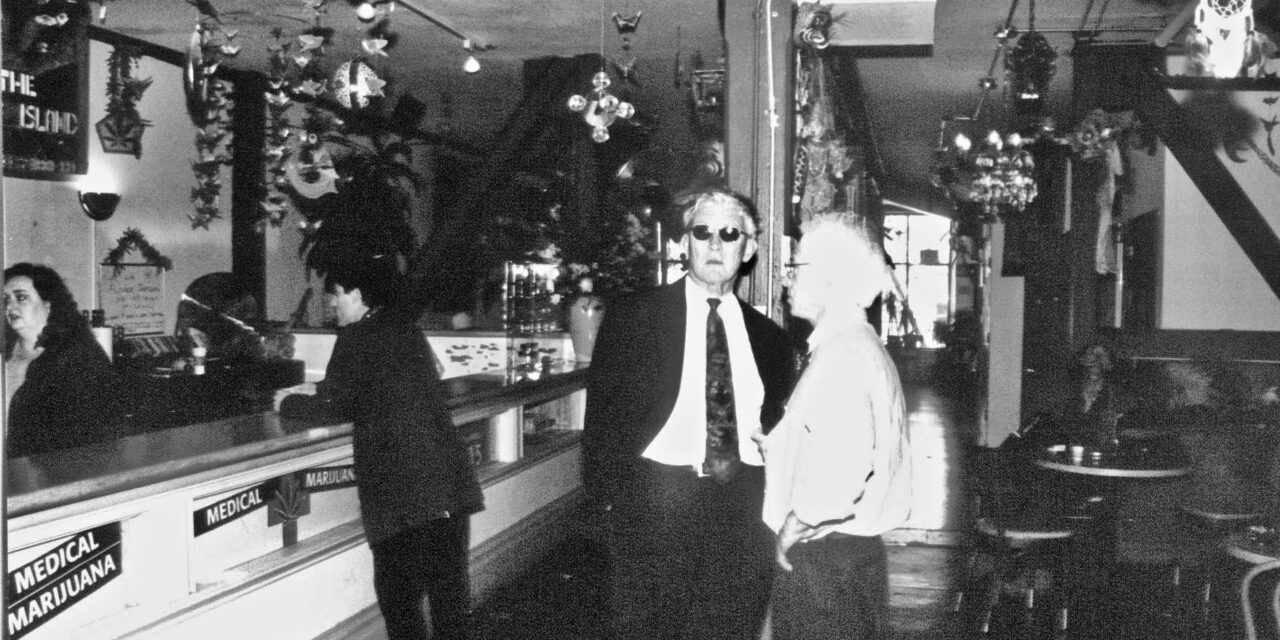 Being a lawyer was a practical way to work for peace and social justice in 1967 when Terence Hallinan began his career, because many people seeking to advance those causes were getting busted and needed defending. But by the mid-70s the pool of such clients had dried up, and Hallinan decided that his future lay in electoral politics. He became active in the Democratic Party and worked hard to change the process by which San Francisco supervisors get chosen. The first “district elections” were held in 1977, and Kayo ran to represent District 5, which included the Castro and the Haight. Unfortunately for him, Harvey Milk was running for the same seat.

Hallinan succeeded a decade later and joined the board in January, 1988. His signature cause as an elected official would be the legalization of marijuana for medical use. But pot was not his only cause —far from it— and every move he made was intended to serve the people, as they used to say. A typical effort —arranging funding for public high school sports—is described in an interview that ran in the Anderson Valley Advertiser November 13, 1991. (I was working at UCSF and filing “Notes From the City.”)

AVA: Your plan was to tax the Giants and the 49ers to help pay for high school sports?
Supervisor Hallinan: Yes —high school and middle school sports. And it would make an interesting article how these professional teams —the Giants less so because they support a farm operation— but here are these professional football teams making millions of dollars, and they fought the idea of paying anything into school sports like tigers.
AVA: No kidding. That didn’t come across in The Chronicle or The Examiner.
Hallinan: I don’t think it did. Because I was trying to not make it a bitter fight or anything.
AVA: You’d think these teams would want to help fund school sports as a PR move.
Hallinan: That’s what I thought. I originally offered it to them. I said “Why don’t you guys take this?”
AVA: Incredible that they wouldn’t go for it. How much money did the program need?
Hallinan: One million, fifty-nine thousand dollars —25 cents on Giants tickets, 75 cents on 49er tickets.
AVA: Paid for by the ticket buyers. So the teams were worried that ticket sales might be affected?
Hallinan: Well, they’re defending their base: 75% of their customers don’t live in San Francisco. I only heard from one San Franciscan who objected to it. He had 10 season tickets and he said, “I’ll have to sell one more game.” I got quite a few calls from out of the county, from people saying, “Hey, you can’t take care of your own schools, why should we have to pay for them?” So the teams were defending their fans against the tax. And in addition, of course, the more taxes there are, the harder it makes it for them to raise their ticket prices.
AVA: They should have just written out a check and said ‘This community supports us, we’re going to support our community.’
Hallinan: Not only wouldn’t they do that, I couldn’t even get them to pick up a piece of it.
AVA: Who were the key guys you were dealing with?
Hallinan: I met with everybody: Carmine Policy for the 49ers.
AVA: What’s he like?
Hallinan: Gruff –just like you would expect.
AVA: What about DeBartolo?
Hallinan: I think I started out talking to him and he said talk to Policy. I phoned him in Ohio and then he came out and he came to see me.
AVA: Policy is the guy Ronnie Lott blames for trading him. I read an excerpt of his book. He didn’t like the guy at all but you could see he was trying to be restrained.
Hallinan:  Well, that’s the way I treated him, too. I didn’t want to make it a big fight between professional sports and the city. We wanted to give the image that we were all cooperating for the sake of the kids. But in fact they both fought me like mad. The 49ers  harder than the Giants.
AVA: Well why don’t you blow the whistle on them, Kayo?
Hallinan: Well… They threatened me to do this and do that, and finally, after I had the whole thing in place, they brought out their ace in the hole, which was that the NFL prohibits surtaxes being passed on to the fans.
AVA: Who has jurisdiction over who? The city has jurisdiction over the team, not vice versa.
Hallinan: Their point was that they would have to pay it themselves because NFL policy prohibits them from passing it onto the fans.
AVA: Is a million bucks that much money to them?
Hallinan: A million bucks off the top is a lot of money. But when you pass it on at 25 cents a ticket or 75 cents a ticket, it isn’t.
AVA: It seems like every year the politicians are making short-term adaptations, scraping together enough money to fund this or that necessary program, and the overall situation continues to deteriorate…Who was involved for the Giants?
Hallinan: Corey Busch. The Giants were a little better because you did appreciate that they were a hometown team. Because they were saying, ‘You’ve really got us between a rock and a hard place on this one.’ Or, ‘Can’t we do it some other way?’ Or, ‘Can’t it be voluntary?’ And once they realized that I was doing it anyway —I had lined up the votes on the board and the mayor’s support and I had talked to the comptroller and the superintendent of schools— once they realized I had it all lined up, they offered to make a deal. They actually said, sort of in surprise: “you’re doing this anyway, aren’t you?” I said, “It’s a done deal.” One guy put out his hand like he was a kid in school who’d been caught doing something wrong, like I was supposed to slap him on the wrist.
AVA: How did it end? Where do things stand now in terms of school sports?
Hallinan: Right now there are school sports. They’re paid for with $1,059,000 out of the general fund and the general fund will be repaid out of an increase in the admissions tax, which I did instead of making it a surtax. I just raised the stadium’s admissions tax, which already existed to pay for upkeep of the stadiums.
The schools told us they needed $1,059,000. We analyzed how many tickets they were going to sell and somebody crunched the numbers and said ‘2.6%’ And that’s what it would have been; but the professional teams, realizing we were going ahead and they couldn’t stop us, said ‘Okay, make it 25 cents and 75 cents. But make it start next year.’ Which I agreed to do because next year’s money will come in before this year’s fiscal cycle (for the city) ends. So it’s one-year now. If we get the school tax through, I won’t push it next year. But if we don’t get the school tax through then I’ll do it another year. I’ll try to broaden it by including The Sharks.

Nobody was happier about Hallinan being on the Board of Supervisors than Dennis Peron (although Dennis was one of several candidates who didn’t get elected in 1987).  The AIDS epidemic was nearing its height, San Francisco was the epicenter (excluding Africa), marijuana was the only thing that restored appetite, and the city’s best-known dealer  wanted to distribute it legally. He consulted Terence, who liked and respected him, about the wording of a proposition he had drafted (with input from Dr. Tod Mikuriya and others) to protect his operation. It went on the ballot in San Francisco in 1991 as “Proposition P” as in pot and passed with 79% of the vote —exactly the percentage of Yes votes that Proposition 215 would get in San Francisco in ’96. It said:

“The People of the City and County of San Francisco recommend that the State of California and the California Medical Association restore hemp medical preparations to the list of available medicines in California. Licensed physicians shall not be penalized for or restricted from prescribing hemp preparations for medical purposes.

“The term ‘hemp medical preparations’ means all products made from hemp, cannabis, or marijuana, in all forms that are designed, intended, or used for human consumption, for the treatment of any disease, the relief of pain, or for any healing purpose, including the relief of asthma, glaucoma, arthritis, anorexia, migraine, multiple sclerosis, epilepsy, nausea, stress, for use as an antibiotic, an anti-emetic, or as any healing agent, or as an adjunct to any medical procedure for the treatment of
cancer, HIV infection or herbal treatment.”

When Prop P passed, Hallinan introduced and organized hearings in support of a resolution entitled “Marijuana for Medicine,” which called for the implementation of Proposition P. Testimony by AIDS patients at the hearings moved those Supervisors who were initially cynical, and Hallinan’s resolution passed unanimously (with Harry Britt and Bill Maher absent). It stated:

“WHEREAS, Federal agencies have refused to recognize marijuana’s important role in medical therapy, continue to maintain legal prohibitions against marijuana’s prescriptive medical use,  and recently cancelled the nation’s federal marijuana-as-medicine program; and WHEREAS, These federal policies unnecessarily expose the people of San Francisco to suffering and unrelieved pain, and prevent physicians in San Francisco from exercising their professional judgment; and WHEREAS, The Board of Supervisors has received extensive and unambiguous testimony in open hearings from highly respected San Francisco physicians, from nursing organizations and from others in  the medical community who accept marijuana has a legitimate role to play in the medical treatment of persons afflicted with the above-mentioned ailments; and WHEREAS The Board of Supervisors has received extensive and compelling testimony from many citizens afflicted with the above-mentioned ailments and other serious illnesses who, as patients, attest to marijuana’s legitimate role in medical therapy; and WHEREAS, while opposing the recreational use of marijuana, the California Medical Association at its March, 1992 convention endorsed the belief that the therapeutic use of marijuana under the direction of a physician may be appropriate for certain conditions; now, therefore, be it

Proposition 215 would ensue in 1996, breaching the total prohibition of marijuana in the United States.