By Fred Gardner in O’Shaughnessy’s 2011

The leader of the Drug Policy Alliance, Ethan Nadelmann purposefully refers to the U.S. War on Drugs as a “failure.” It’s his #1 soundbite, and it’s misleading. It implies that the stated goals of the War on Drugs —reducing availability, teenage use, addiction, etc.— are its real goals. They aren’t, and they never were, as the Nixon White House tapes revealed..

The federal Controlled Substances Act was designed to justify ever-bigger police budgets and staffing levels, to encircle and infiltrate the ghettos, and to make sure that the rebellions of the 1960s were permanently snuffed out. The War on Drugs is a great success for the prison-industrial complex, the pharmaceutical industry, the armaments makers, etc.. Attorney General John Mitchell, the CSA’s mastermind, said at the time, “This country is going to go so far right you won’t be able to recognize it.”

When Nixon and Mitchell came into office in 1968, millions of Americans identified with and supported “the movement” —which was not, at the time, divided into the kind of single-issue enterprises that exist today. People demanding peace and people demanding equality on all fronts —racial, sexual, economic— overlapped and intermingled, and many saw their seemingly diverse demands as one big demand for a democratic society.

The corporate elites were shaken and responded with wide-ranging reforms. They hastened the return of U.S. troops from Vietnam and ended the draft —a shrewd response to the “problem” of anti-war GIs. They implemented affirmative action programs in the corporate world and Title IX funding for women’s sports in the schools. In response to millions of people smoking marijuana —mass civil disobedience—many states passed “decriminilization” measures. These reforms served to mollify potential rebels.

At the same time, the corporate elites escalated the War on Drugs (which was being conducted long before Nixon gave it a catchy name). Like their liberal reforms, its goal was to prevent any future uprisings by oppressed and/or idealistic Americans. If our rulers’ post-’60s tactics seem contradictory, remember: The Man has a left and The Man has a right—and they’re both around your throat.

By calling the War on Drugs a “failure,” the DPA leader diverts attention from the corporados who are directing the war, very efficiently, year after year, from think tanks and lobbyists’ offices in New York and Washington. DPA should be exposing the perpetrators of the Drug War, not facilitating their cover-up.

We, the people, don’t make “drug policy,” and to pretend that we do is misleading because it implies that we live in a functioning democracy. We live in a corporate state. The Supreme Court decision allowing unlimited, concealed corporate funding in elections made it official.

Dr. David Bearman has published an op-ed in the Santa Barbara Independent that echoes the DPA line. It begins, “The American Academy of Cannabinoid Medicine rejects the failed U.S. drug war…”

Bearman extends the “failure” image by describing marijuana prohibition as an “unintended consequence.” He writes, “The many unintended negative consequences of our current drug laws include (but are not limited to) putting barriers in the way of legitimate medical use of Cannabis…”

Does he really think that Richard Nixon intended sick people to have access to marijuana but some lawyer under Mitchell screwed up and put it on Schedule I?

“It is time for the President to be a man of his word,” Bearman declares —as if Obama’s disappointing decisions were a function of character rather than political subservience to Wall Street.

Barack Obama, personally, understands marijuana and appreciates marijuana. That was the strong impression of a sensible man after a brief encounter with BHO. “When I told him what I wanted to manufacture,” said our source, who has developed an innovative delivery system for plant cannabinoids, “he nodded and smiled. Obvious enthusiasm and approval —his body language was totally supportive. When I told him how many people I intended to employ, his smile got even bigger and he gave me a slap on the back.”

The aspiring manufacturer came away encouraged. But he never did get the approvals needed to advance his project, and DEA raids against phytocannabinoid producers have escalated since my friend got the Presidential backslap.

To whom does Barack Obama defer on drug policy? That is the question.

In the early 20th century, an astronomer named Lowell reasoned that Neptune’s path around the sun was being altered by the gravitational force of an unseen mass. This led to an intensive search of the skies and the discovery of Pluto.

What unseen mass is pulling President Obama from his expected orbit? Reformers need to conduct an intensive search of the skies above Columbia University, Phoenix House, the Pentagon, the Patton Boggs offices in Washington, and other likely sources of gravitational pull. They might discover influential Plutocrats, well paid by Big PhRMA in recognition of their great, ongoing success.

The following is from Forrest Hylton in Counterpunch:

Who Profits From Marijuana Prohibition? 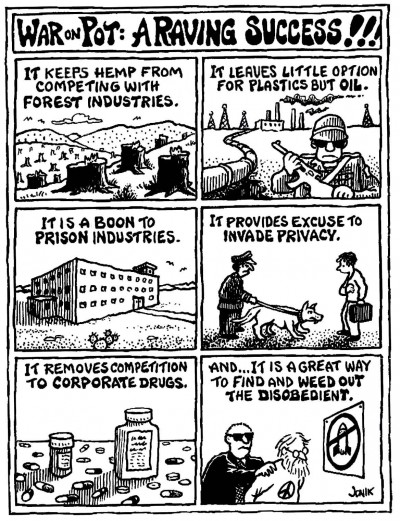 As President Obama’s drug czar, Gil Kerlikowske, put it in July 2009, “Legalization is not in my vocabulary nor is it in the president’s.”

To understand why, it is helpful to ask who wins and who loses from legalization. The losers, not necessarily in order of importance, would include U.S. Immigration and Customs Enforcement, the DEA, U.S. Border Patrol, the FBI, the ATF, the IRS, state and local police forces, the U.S. Coast Guard, the U.S. armed forces, to name only some of the agencies whose budgets depend on the drug war for funding, as well as their counterparts in U.S. client states throughout the Americas; arms manufacturers like Sikorsky Helicopters; large pharmaceutical companies like Pfizer; suppliers of chemicals for fumigation like Monsanto; the banking sector as well as off-shore tax havens; the Republican Party; along with warlords, gangs and gangsters.

The clearest winners would be consumers, direct producers, and societies that would be less militarized, less carceral, less moralizing, and would have stronger public health and education systems.

But, as Jack Cole, who spent 26 years in policing narcotics in New Jersey and is now the executive director of Law Enforcement against Drug Prohibition, stressed, “When you train your police to go to war, they’ve got to have an enemy.”

Cole considers the War on Drugs a “terrible metaphor” for “policing in a democratic society.” Terrible, alas, but substitute “neoliberal” for “democratic,” and it is nothing if not apt. Predictably, Obama and Kerlikowske have dropped the nomenclature, but the policies remain intact.