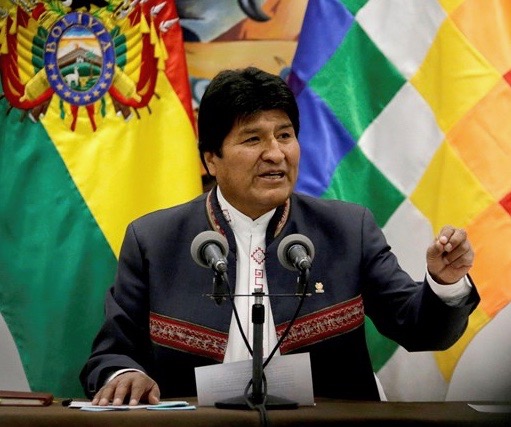 “Let me Chew my Coca Leaves!” by Evo Morales ran in O’Shaughnessy’s Summer 2009. For the Indians of Bolivia, Morales’s 12 years as president has been like “the Reconstruction era” for Black people in the US —a brief period during which they  gained some economic and political standing. The heavily plastic-surged woman who declared herself president as the military took power pledged to restore the Bible to Bolivia. She looks like a Donald Trump ex.

Morales was ordered to resign by the head of Bolivia’s military, according to reliable Mark Weisbrot of the Center for Economic and Policy Research (CEPR), after weeks of protests and disputes over the October 20 elections.  The Organization of American States (OAS) had challenged the official results (even before they had been announced!) and Morales agreed to an OAS audit of the election. The audit found an “inexplicable” change in the trend as the votes had been counted, and on this basis called for new elections. But CEPR’s statistical analysis of the votes provided the explanation: those from rural areas that overwhelmingly favored Morales were counted later than those favoring his opponents.

Counterpunch has the economic-determinist angle on the coup: Bolivia has huge lithium reserves.

Let me Chew my Coca Leaves by Evo Morales

In March a meeting of the United Nations Commission on Narcotic Drugs took place that will help shape international antidrug efforts for the next 10 years. I attended the meeting to reaffirm Bolivia’s commitment to this struggle but also to call for the reversal of a mistake made 48 years ago.

In 1961, the United Nations Single Convention on Narcotic Drugs placed the coca leaf in the same category with cocaine –thus promoting the false notion that the coca leaf is a narcotic– and ordered that “coca leaf chewing must be abolished within 25 years from the coming into force of this convention.” Bolivia signed the convention in 1976, during the brutal dictatorship of Col. Hugo Banzer, and the 25-year deadline expired in 2001.

So for the past eight years, the millions of us who maintain the traditional practice of chewing coca have been, according to the convention, criminals who violate international law. This is an unacceptable and absurd state of affairs for Bolivians and other Andean peoples.

Many plants have small quantities of various chemical compounds called alkaloids. One common alkaloid is caffeine, which is found in more than 50 varieties of plants, from coffee to cacao, and even in the flowers of orange and lemon trees. Excessive use of caffeine can cause nervousness, elevated pulse, insomnia and other unwanted effects.

Another common alkaloid is nicotine, found in the tobacco plant. Its consumption can lead to addiction, high blood pressure and cancer; smoking causes one in five deaths in the United States. Some alkaloids have important medicinal qualities. Quinine, for example, the first known treatment for malaria, was discovered by the Quechua Indians of Peru in the bark of the cinchona tree.

The coca leaf also has alkaloids; the one that concerns antidrug officials is the cocaine alkaloid, which amounts to less than one-tenth of a percent of the leaf. But as the above examples show, that a plant, leaf or flower contains a minimal amount of alkaloids does not make it a narcotic. To be made into a narcotic, alkaloids must typically be extracted, concentrated and in many cases processed chemically. What is absurd about the 1961 convention is that it considers the coca leaf in its natural, unaltered state to be a narcotic. The paste or the concentrate that is extracted from the coca leaf, commonly known as cocaine, is indeed a narcotic, but the plant itself is not.

Why is Bolivia so concerned with the coca leaf? Because it is an important symbol of the history and identity of the indigenous cultures of the Andes.

The custom of chewing coca leaves has existed in the Andean region of South America since at least 3000 B.C. It helps mitigate the sensation of hunger, offers energy during long days of labor and helps counter altitude sickness. Unlike nicotine or caffeine, it causes no harm to human health nor addiction or altered state, and it is effective in the struggle against obesity, a major problem in many modern societies.

Today, millions of people chew coca in Bolivia, Colombia, Peru and northern Argentina and Chile. The coca leaf continues to have ritual, religious and cultural significance that transcends indigenous cultures and encompasses the mestizo population.

Mistakes are an unavoidable part of human history, but sometimes we have the opportunity to correct them. It is time for the international community to reverse its misguided policy toward the coca leaf.

Evo Morales Ayma is the president of Bolivia.

Alongside the piece by Morales in O’S Summer ’09 was a story about a plan that could bring revenue to farmers in Afghanistan and maybe even bring peace: growing poppies for medical use. The idea went unheeded, of course, and we’ve had 10 more years of war, plus an opioid epidemic in the US that began with pain patients getting addicted to pharmaceuticals made from thebaine-dominant poppies grown in Tasmania (with most of the revenue going to Johnson & Johnson executives and shareholders).

Bonus track: The War on Plants

Claudia Jensen, MD, on How to be a Cannabis Clinician