Which Conditions are Patients Actually Treating With Cannabis? 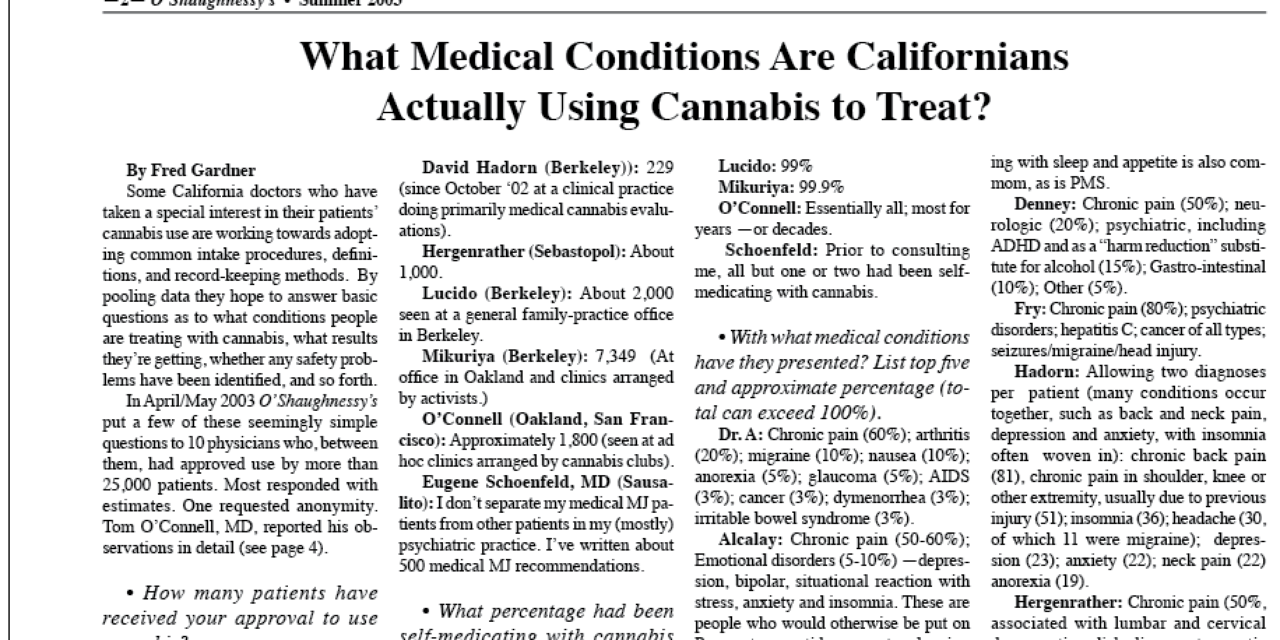 By Fred Gardner in the first O’Shaughnessy’s (Summer 2003)

Some California doctors who have taken a special interest in their patients’ cannabis use are working towards adopting common intake procedures, definitions, and record-keeping methods. By pooling data they hope to answer basic questions as to what conditions people are treating with cannabis, what results they’re getting, whether any safety problems have been identified, and so forth.

In April/May 2003 O’Shaughnessy’s put a few of these seemingly simple questions to 10 physicians who, between them, had approved use by more than 25,000 patients. Most responded with estimates. One, “Dr. A,” requested anonymity

• What percentage had been self-medicating with cannabis prior to consulting you?
Dr. A: More than 97 percent.
Alcalay: 99 percent.
Bearman: While most have used it before, many had stopped years ago before starting again medically. I would estimate that 95% to 97% had been using with benefit just prior to the visit.
Denney: 95%.
Fry: All but approximately 20.
Hadorn: I can only remember one who wasn’t already using it.
Hergenrather: 99%.
Lucido: 99%
Mikuriya: 99.9%
O’Connell: Essentially all; most for years —or decades.
Schoenfeld: Prior to consulting me, all but one or two had been self-medicating with cannabis.

• Have you encountered any out-of-the-ordinary conditions being treated effectively with cannabis?
Dr. A: Psoriasis rash: I have two patients with real florid cases and it dramatically decreases when they go on marijuana, and when they go off it, it gets a lot worse.
Vertigo: it actually helps reduce the spinning sensation, not just the nausea.
And the same thing with tinnitis — in some patients, it decreases the symptom by as much as 50 percent. They say they’re actually hearing a lot less volume.
I’m picking this up, but I’m not writing [approvals] for these indications.
Alcalay: Marfan’s Syndrome [an inherited disorder characterized by long, thin limbs, a protruding chest wall, shortsightendness and other abnormalities]. Their joints tend to ache a lot and they say cannabis gives them both physical and psychological relief.
Bearman: Paraplegia, paraparesis, quadriplegia (for muscle spasm, pain), phantom limb pain, degloving of thumb, partial traumatic amputation both feet, herniated disc, failed back surgery, s/p discectomy, s/p lumbar or cervical fusion, radiculopathy, s/p gun shot wound to the spine, brain tumor, cancer of the colon, Tourette’s…
Denney: Too numerous to list.
Fry: Psorias/urticaria —direct application of cannabis ointment reportedly results in decreased lesion size. Treatment of tinnitis and Meniere’s has been reported with decrease of symptoms and increased sleep.
Hadorn: Three patients said it helped their psoriasis. So far I have seen only one multiple sclerosis patient, only four cancer patients, and only four with neuropathy. Four patients said it helped their asthma (cannabis is a well-known bronchiodilator).
Hergenrather: I’ve been enthusiastic about the quality-of-life changes observed in insulin-dependent diabetics, especially Type 1. Acceptance of one’s condition, stability of blood-sugar levels, compliance to therapy, easing of diabetic neuropathy, etc.
I’ve noticed very beneficial response for renal-failure patients, dialysis-depdendent, awaiting transplants.
Impressive benefit in a dystonia case.
A significant number of patients have ended tobacco, alcohol and opiate addictions.
Lucido: MS, Parkinson’s.
Mikuriya: Review the list of ICD-9 conditions on my initial intake interview (see illustration on page 5).
O’Connell: Only “out of the ordinary” in that most considerations of the subject don’t even acknowledge the existence of the low-self-esteem syndrome I believe to be at the root of most self-medication with cannabis. The closest analogous condition is clearly “ADD,” which is a poor surrogate because of the emphasis placed on hyperactive disruptive behavior exhibited by (mostly male) grade-school children.
Schoenfeld: Two patients have told me their color blindness was improved (not cured) by the use of cannabis.

• Your observations re safety and efficacy.
Dr. A: I’ve had rare reports of idiosyncratic hypotensive episodes [fainting as a result of blood-pressure changes].
Alcalay: No adverse reports.
Bearman: Practically no side effects. But then again to a large extent this is a preselected patient population.
Denney: No adverse reactions or drug interactions reported.
Fry: Occasional reports of over-sedation, panic/anxiety related to fear of law enforcement. Ninety-five percent report very effective symptom relief, improved quality of life, and enhanced ability to live with their disease.
Hadorn: Extremely safe and effective for virtually all patients.
Hergenrather: There have been two patients out of a thousand who tell me they have discontinued use of cannabis because it was ineffective. About 70% of the patients check the “very effective” box on the questionnaire, 29% check “effective,” and 1% check “somewhat effective.” I would estimate that half of all patients have stopped taking pharmaceutical drugs once they have been able to regularly use cannabis. Most of the remainder have reduced their use of prescription medications.
I have seen no significant adverse effects. Although my follow-up with this population of patients is limited to about four years, the patients note that they have been using cannabis medicinally for a longer period —five to 35 years. Minor concerns have been expressed, on occasion, about dry mucous membranes and drowsiness. The most frequently expressed concern involves smoking as the method of administration. This group has substantially converted to vaporizing and reports marked improvement in respiratory well being.
O’Connell: Those who shouldn’t use pot know it and avoid it. The people coming in to see me know it works; their longterm use at stable dosage levels is eloquent endorsement of both the safety and efficacy of pot.
Lucido: Extremely safe, very effective.
Mikuriya: It is remarkable how there have been no reports of adverse interactions with any other medications. There is no comparing the safety of cannabis to any other medication available.
Schoenfeld: Cannabis is very safe and useful, except for those using excessive amounts by inhalation, or those with serious histories of substance abuse problems.

• To how many patients have you recommended cannabis as a treatment for ADHD?
Dr. A: None —my practice is not set up for psychiatric patients. But we’re certainly seeing people using it for ADD.
Alcalay: Two or three, although many use it to quiet down and keep focused.
Bearman: Between 20 and 40.
Denney: 100-200
Fry: As a primary diagnosis, approximately 50 in their early 20s, fewer than five below age 18. As a secondary diagnosis the numbers are significant but we do not have these figures.
Hadorn: Nine. Two patients carried a diagnosis of schizophrenia and seven with bipolar disorder. I gave secondary diagnoses of “stress disorder” to 12 patients whose health I felt was at risk due to the level of psychological stress they were experiencing.
Hergenrather: About one percent of all patients. I am being more careful to ask about childhood behavioral problems because I find that many people give a history consistent with ADHD even though they may not have been diagnosed or treated for this condition.
Lucido: 20. Research should be carried out in this area.
Mikuriya: 861
O’Connell: The vast majority— but only if you are comfortable using “ADHD’ as a surrogate for “low self-esteem,” which I believe to be a far more accurate descriptor of the condition (mood disorder?) for which self-medication with cannabis was initiated.
Schoenfeld: I have approved cannabis for ADHD about six times, again as an adjunct to standard treatment.

• How many of your patients are consciously substituting cannabis for alcohol?
Dr. A: I am seeing such patients but I don’t write (recommendations) for such indications.
Alcalay: Two to three percent (24-36).
Denney: 200-300.
Fry: Figures not available but an estimated 20% of male patients report reduced alcohol intake (and inability to deal with alcohol) when questioned directly. Many report weaning themselves from controlled substances, licit and illict, with the use of cannabis.
Hadorn: Depends on what you mean. Many realize that they would drink more if they didn’t toke, but only a few have consciously decided to make the substitution. I’d say 25% in former category, maybe 5-10% in latter.
Hergenrather: There are chronic pain patients who used alcohol because it numbed the pain. They have consciously substituted cannabis for alcohol where alcohol had become a mental and physical problem. In the case of mood-disorder patients, alcohol was not a treatment but a problem, so cannabis is not regarded as a substitute. The “glass -of-wine-with-dinner” patients haven’t stopped their light, regular use of alcohol, so there has been no substitution.
Lucido: 10-20.
Mikuriya: I have given the figure 7% but this may be revised upwards based on a new follow-up questionnaire. The phenomen of denial has to be acknowledged. A large number of patients, on follow-up examination, acknowledge that they have been substituting cannabis for alcohol.
O’Connell: Most. This is also a complex issue because many of the daily users who have opted for cannabis over alcohol found themselves to be “intolerant” —but only after making themselves terribly sick the first two or three times they tried to drink. This raises the question: did their quest for symptomatic relief at age 13 or 14 cause them to actually flirt with alcohol poisoning? Also, those who tried cannabis before alcohol may have been partially immunized against abnormal attraction and alcoholism.
The issue of whether the patient realizes that he’s using cannabis in preference to alcohol is somewhat separate; my interviews suggest that about 1/3 know it, 1/3 suspected it, and 1/3 were clueless.
Schoenfeld: Many of my patients report that they use cannabis rather than alcohol, and have thus stopped a potential alcohol ABUSE problem. However, I have found that alcoholics much prefer alcohol to cannabis. These individuals are best advised to use neither drug.

The reportedly successful use of cannabis as an alternative to alcohol, SSRI antidepressants, and stimulants (in the treatment of ADHD) warrants serious, large-scale investigation. A necessary first step is for the doctors who are monitoring patients using cannabis for these purposes to agree on basic definitions, diagnostic criteria, etc., and to adopt uniform record-keeping methods.

Hergenrather’s observation that half his cannabis-using patients have been able to stop taking pharmaceutical drugs —and others have reduced their intake— suggests a line of inquiry that belongs on a common interview form.
It appears that with very few exceptions, only people who had been self-medicating with cannabis are availing themselves of it under California law. Legalization has not led to a wave of naive patients with various conditions trying cannabis to see if it might help in some way, or doctors recommending that they do so. “Approve” is a far more accurate term than “recommend” to describe the physicians’ role to date.

Several factors may explain the flat state of demand for a promising new medicine:

The highly publicized prosecutions of cultivators and distributors by state and federal law enforcers has maintained an aura of illegality around cannabis.

No manufacturers have an interest in promoting its use —in fact, they have a strong incentive to lobby for continued prohibition.

Cannabis remains hard to get and expensive ($400/ounce). Insurers don’t reimburse for it. Corporate employers test, humiliate and fire cannabis users at will. Almost no doctors have been educated on any aspect of cannabis —modes of delivery, efficacy, mechanism of action, etc.— whereas all are aware that smoking involves an assault on the lungs. Threats from the federal government, although ruled unconstitutional, have had a chilling effect.

In subtle but significant ways, lingering Prohibition has also affected the thousands of Californians who legally self-medicate with cannabis.

Mikuriya has observed that many problem drinkers, at their initial exams, will emphasize conditions other than alcoholism; upon learning that substituting cannabis for alcohol entitles them to a letter of approval, they reveal the true severity of their drinking problem.

Similarly, O’Connell reports that many young men debilitated by ADHD with low self-esteem will present with physical-pain problems. They are forthcoming about beneficial psychotropic effects only after the doctor has acknowledged the possibility of such effects. 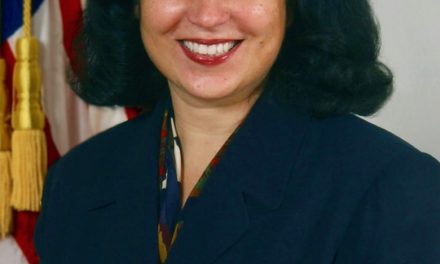 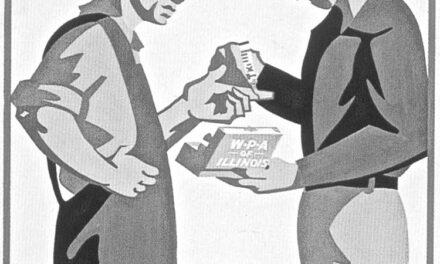