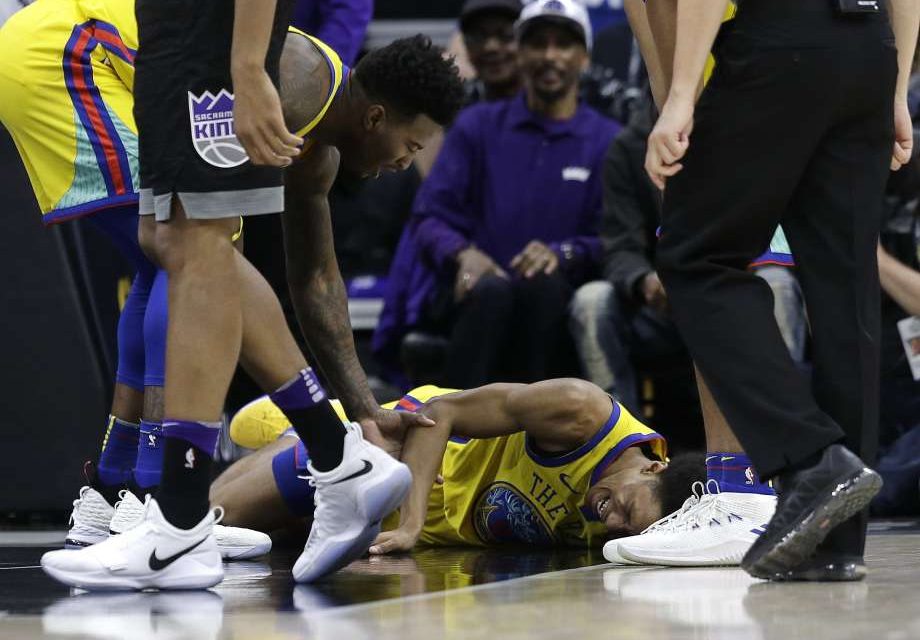 Golden State Warriors guard Patrick McCaw was badly injured during a game March 31. He got undercut while leaping and fell hard on the base of his spine. He was placed on a stretcher and rushed to UC Davis Medical Center, where X-rays, scans and an MRI exam showed that he had suffered a severe lumbar-spine contusion.

“To walk, McCaw slowly places one foot in front of the other with the labored effort of someone much older. Severe lower-back pain has made sleep a struggle. Outside of daily trips to the practice facility for rehab, McCaw is confined to his apartment in Jack London Square…

“McCaw’s pain medication doesn’t seem to work. Most of his nights are spent wide awake, hoping for a long enough respite from his lower-back pain to finally fall asleep.”

Chronicle reporter Connor Letourneau adds that Warriors Coach Steve Kerr “who has dealt with chronic back pain for three years, can relate. Almost daily, he has texted or called McCaw to offer support and answer any questions.”

Steve Kerr is the Warriors’ likable, brilliant coach. In 2015, soon after his team won the NBA championship,  Kerr underwent surgery to eliminate the pain caused by a ruptured disk. A scalpel evidently nicked the membrane that contains the fluid surrounding the spinal cord. When the spine and brain lose cushioning, severe headaches, nausea and other symptoms can ensue. Kerr had to take off much of the 2015-2016 season. A second surgery was supposed to correct the problem but did not.

Kerr returned to coaching in the fall of 2016. He never said that he was cured, only that he was feeling better. He was quoted in the Washington Post expressing strong regret about having opted for surgery in the first place:

“I can tell you if you’re listening out there, stay away from back surgery. I can say that from the bottom of my heart. Rehab, rehab, rehab. Don’t let anyone get in there.”

Jeffrey Hergenrather, MD, president of the Society of Cannabis Clinicians  is an aging jock who thinks very highly of Steve Kerr. (Who doesn’t?) Upon hearing that cannabis hadn’t provided relief to Kerr, Hergenrather commented,

“Maybe he could have used better advice. How much did his doctor know about cannabis? Maybe he needed help finding the right delivery system, the right cannabinoid ratios, the right dose.”

Steve Kerr and Pat McCaw may be unaware that there are specialists worth consulting when trying cannabis to treat an unusual problem. The media has successfully created an image of the “potdoc” as a profiteer who plays no role beyond authorizing people to use the herb as medicine. In reality, there is a spectrum of expertise. At one end are doctors with an understanding of how the endocannabinoid system works, and the range of symptoms that can be alleviated by cannabis, and the specific needs of the individual they are treating. —Fred Gardner