By Fred Gardner    Just arrived in the mailbox is a book called Dangerous Grounds, which recounts how coffeehouses set up near Army bases became hangouts for soldiers during the Vietnam War era. I started the first such enterprise with Donna Mickleson and Devora Rossman —the UFO coffeehouse in Columbia, South Carolina— in the fall of 1967.

The author, David Parsons, a historian with an NYU affiliation and a contract from the University of North Carolina Press, interviewed me for the book a while back. Now I’m uneasy about opening it. What if he got it wrong? What if he got it right? Of what use can this material be in 2017?

On the front cover I see Donna and Devora and Sp4 Marty Blumsack, “permanent party” at Fort Jackson, who had attended the trial of Dr. Howard Levy (court-martialed earlier that year for refusing to train Green Berets in the healing arts). Marty became a de facto staffer at the UFO. His tales of Dr. Levy’s braveness and integrity encouraged everyone who heard them. Among the frequent patrons were SNCC organizers, including Cleveland Sellers. A University of South Carolina student, Judy Olasov, joined the crew.  The UFO was the first integrated hangout in Columbia, not just for whites and blacks, but for GIs and students, and on week-end nights we drew hundreds of people.

Prominent among the posters on the coffeehouse wall is a blow-up of a classic botanical drawing of the Cannabis Sativa plant. I can also make out John Lennon as a soldier in “How I Won the War,” a mushroom cloud, WC Fields, Mama Cass (of the Mamas and the Papas), Jackie Gleason as Minnesota Fats, Lyndon Johnson picking up a beagle by the ears, and a Fillmore poster. (Bill Graham had donated several sets of posters as we headed off for the East Coast. And Alan Meyerson of the Committee revealed the secret to running a cabaret: wiring that enables you to control the stage lights while standing at the cash register.)

Back then, ending marijuana prohibition was intertwined with ending the war and ending discrimination of all kinds as a goal of the movement.  Oliver Stone’s movie “Platoon,” set in ’67 in a combat zone near the Cambodian border, dramatizes the stoner/juicer divide, with the stoners growing increasingly ambivalent about the mission itself. (Willem Dafoe was great. Forest Whitaker and Johnny Depp had minor roles.) Ron Cobb’s cartoon “Pacification,” drawn for the LA Free Press and syndicated by Liberation News Service to underground papers, depicted soldiers blowing grass (in broad daylight) as an alternative to combat. Cobb’s graphic was an obvious exaggeration with a potent element of truth and a more-than-double-entendre meaning: Who is getting pacified? How is pacification achieved?

Cobb’s cartoon found its way into a little broadsheet called “Aboveground,” produced by soldiers at Fort Carson, Colorado in 1969. The article it adjoined was called “The Pot Culture.”  I wonder if the anonymous author went on to become a sociologist.

“The American community in Vietnam is divided into two major sub-cultures which are closely related in their activities. One culture is seeking pot and the other is seeking the Pot Seekers. This gives everybody a chance to play. The ‘Wet’ Culture is comprised of the officers, senior NCOs and a small number of lower-ranking enlisted men, The Pot Culture on the other hand, encompasses as high as 85 percent of all troops 18-26 years aof age, including a number of Officers (mostly Company grade). Mary Jane has won the hearts of and minds of our troops.

“Did  pot come from the jungle to the campus or did it travel to the jungle with the student turned soldier? Conjecture would have it that certainly there is more pot growing in the jungles than on the campuses… even of the Agricultural Institutions.

“Young men, who in no other environment than Vietnam would have even considered smoking Pot, are being turned on everyday. When they return from the war many of them place their new influence where it had not hitherto been, which could very well be the cause of the snowball effect in the States. If one already understands the ways of ‘Mary Jane,’ chances are he will find a suitable source in less than a week from his day of arrival from Vietnam. If one is not yet familiar with this young Lady, it may take a month before he sees the Pot culture all around him.” 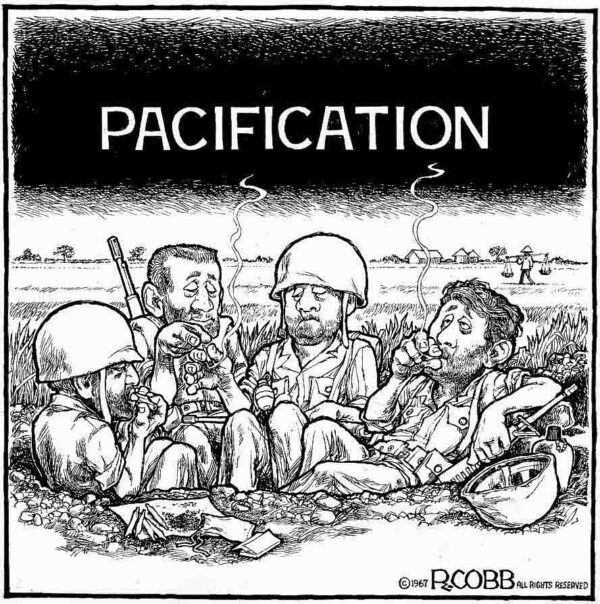 Anatomy of a CHP Pot Bust