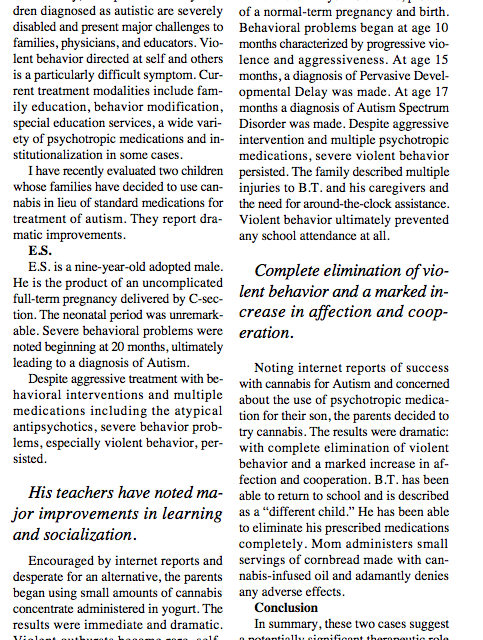 A Brief Report of Two Cases by Philip A. Denney, MD 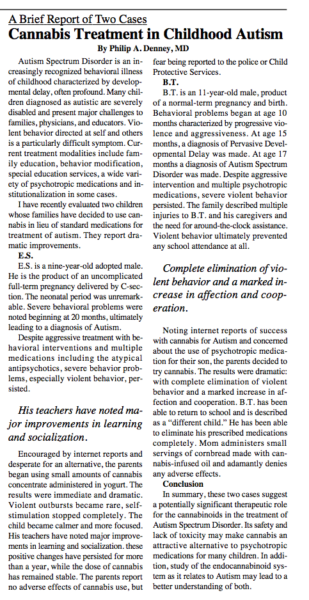 Autism Spectrum Disorder is an increasingly recognized behavioral illness of childhood characterized by developmental delay, often profound. Many children diagnosed as autistic are severely disabled and present major challenges to families, physicians, and educators. Vio- lent behavior directed at self and others is a particularly difficult symptom. Cur- rent treatment modalities include family education, behavior modification, special education services, a wide variety of psychotropic medications and in- stitutionalization in some cases.

I have recently evaluated two children whose families have decided to use cannabis in lieu of standard medications for treatment of autism. They report dramatic improvements.

E.S. is a nine-year-old adopted male. He is the product of an uncomplicated full-term pregnancy delivered by C-section. The neonatal period was unremarkable. Severe behavioral problems were noted beginning at 20 months, ultimately leading to a diagnosis of Autism.

Encouraged by internet reports and desperate for an alternative, the parents began using small amounts of cannabis concentrate administered in yogurt. The results were immediate and dramatic. Violent outbursts became rare, self-stimulation stopped completely. The child became calmer and more focused. His teachers have noted major improvements in learning and socialization. these positive changes have persisted for more than a year, while the dose of cannabis has remained stable. The parents report no adverse effects of cannabis use, but ear being reported to the police or Child Protective Services.

B.T. is an 11-year-old male, product of a normal-term pregnancy and birth. Behavioral problems began at age 10 months characterized by progressive vio- lence and aggressiveness. At age 15 months, a diagnosis of Pervasive Devel- opmental Delay was made. At age 17 months a diagnosis of Autism Spectrum Disorder was made. Despite aggressive intervention and multiple psychotropic medications, severe violent behavior persisted. The family described multiple injuries to B.T. and his caregivers and the need for around-the-clock assistance. Violent behavior ultimately prevented any school attendance at all.

Noting internet reports of success with cannabis for Autism and concerned about the use of psychotropic medication for their son, the parents decided to try cannabis. The results were dramatic: with complete elimination of violent behavior and a marked increase in affection and cooperation. B.T. has been able to return to school and is described as a “different child.” He has been able to eliminate his prescribed medications completely. Mom administers small servings of cornbread made with can- nabis-infused oil and adamantly denies any adverse effects.

In summary, these two cases suggest a potentially significant therapeutic role for the cannabinoids in the treatment of Autism Spectrum Disorder. Its safety and lack of toxicity may make cannabis an attractive alternative to psychotropic medications for many children. In addition, study of the endocannabinoid sys- tem as it relates to Autism may lead to a better understanding of both. 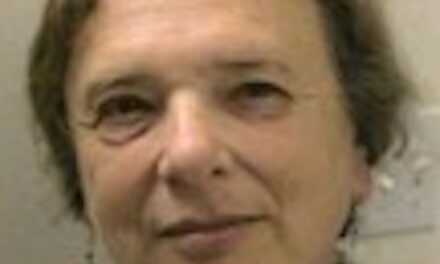 Claudia Jensen, MD, on How to be a Cannabis Clinician