Volunteers who have been canvassing door-to-door for Democratic presidential candidates might not know the origin of the word. Here it is in Oxford’s Concise Etymological Dictionary:

The nearby word canopy became well known to cannabis cultivators in California when cities and counties started limiting the square-footage of allowable gardens.  The following is from “The Allowable Quantity Expert,”  a profile of activist Chris Conrad in the Spring 2005 O’Shaughnessy’s.

“Conrad recently published a booklet called ‘Cannabis Yields and Dosage’ that, in 20 pages, discusses every aspect of the contentious allowable-quantity issue. It explains the reasoning behind the guidelines adopted by Sonoma, Humboldt and Santa Cruz counties (100 square feet of plant canopy and three pounds of bud per patient). It also provides a useful analysis of SB 420, the bill passed by the California legislature in 2003 to ‘clarify’ Prop 215.”

As the fiasco in Iowa was unfolding, I looked up the origins of caucus:

Isn’t it likely that the Algonkins were acknowledging the wisdom of crows? Today, in English, the collective noun is “a murder of crows.” It’s a slander, probably applied to these intelligent Corvids by some celebrated wit at the Algonquin round table. Yes, crows can screech and they eat small animals. But mostly they eat fruit, grains, nuts, and seeds. Their typical sound is caw-caw. Anyone who has heard them assembling in the evening in a tall tree will agree, I’m sure, that the proper term would be a caucus of crows. (Given the intelligence of some of our politicians, it would still be a bit of a slander.) —FHG 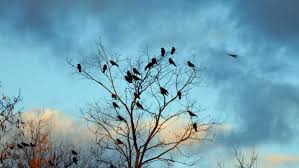