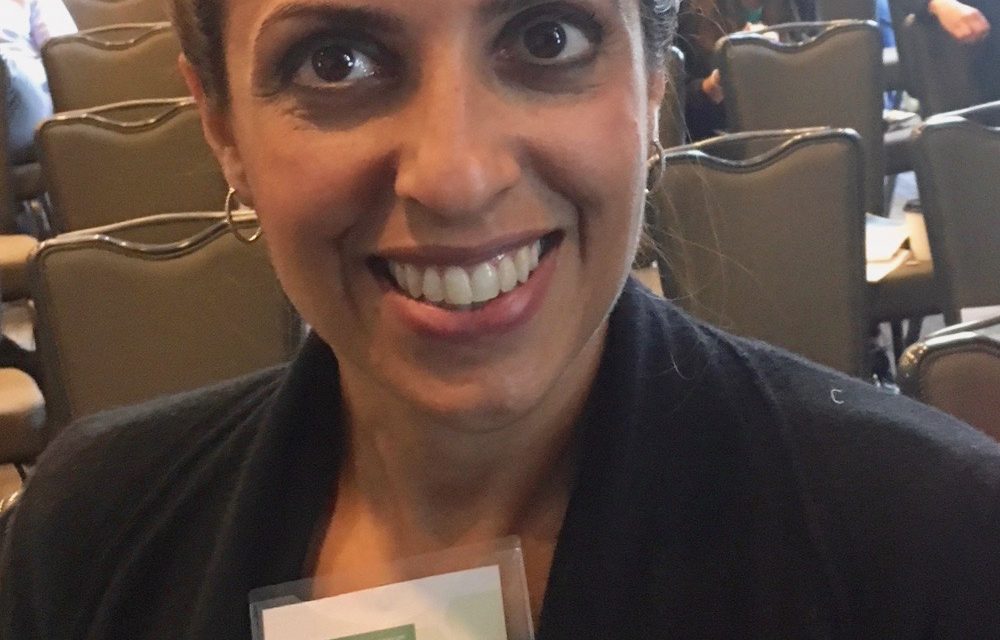 “Cannabis and Health” was the stated theme of a conference held June 8 at the Center for Medicinal Cannabis Research on the UC San Diego campus. The focus was on potential benefits. $10 million in tax revenue collected from cannabis consumers and providers will be allocated to researchers by California’s Bureau of Cannabis Control. The looming questions are: what research to fund, and which researchers.

There were about a hundred attendees from every facet of the field.
Sherry Yafai, MD, represented the Society of Cannabis Clinicians. She was articulate, organized, on-target and passionate in defense of her practice. She only began practicing after legalization for adult use, and only takes physician referrals. “I’m not a pot doc,” she said.

Yafai works  with a “High Sobriety” group that uses non-smokable cannabis to treat drug addiction, and also in the ER at St. John’s Hospital in Santa Monica. Her cannabis patients range in age from two to 100 (!), and are treating various conditions —mainly pain, cancer, and narcotics addiction. Most had tried marijuana in their youth, she said, and most don’t want inhaled medicine.

Yafai emphasized how patients decrease use of other medications, including opiates, other controlled substances, and blood pressure drugs. Her patients who are longterm addicts are given maintenance doses of CBD-rich oils to get off drugs. She said she had successfully treated four long-term opiate addicts, helping them get entirely “clean” in 10 days using nothing more than cannabis oil. A French addiction specialist in the audience questioned her claim. Yafai said she would soon have data to present. (Earlier in the session she had taken the mike to respond to a presenter who questioned the medical need for high-potency products, noting that high doses were used in cancer treatment and formulations for epilepsy and drug abuse.)

The conference began with a lucid presentation by Dr. Piomelli about the history of medical cannabis, the cannabinoid receptor system, endocannabinoids, and the influential National Academy of Sciences, Engingeering & Medicine Report.

Piomelli, who directs a lab at UC Irvine, wants to work on specific chemical agonists, antagonists, and FAAH inhibors. “I don’t think cannabis is really a good drug,” he said. “I think we can have better drugs.” He remains concerned about prenatal exposure to cannabis, not because of the lower birth weight, which can be explained by smoking, but by possible effects on fetal stem cells, which haven’t been investigated. (Overall though he is pro-cannabis and anti-prohibition).

Ziva Cooper from Columbia University presented her research on pain treatment with cannabis and opioids. Subjects given sub-clinical doses of oxycodone and cannabis to treat cold-pressor-induced pain showed no response; but when the two drugs were combined, they were effective. Conclusion: cannabis increases analgesic but not intoxicating effects of opioids.

Marcel Bonn-Miller of University of Pennsylvania and Tilray discussed the lack of studies regarding cannabis and PTSD. Surveys of patients at SPARC et al show widespread use of cannabis amongst PTSD patients. They prefer high THC to CBD. Early results of an ongoing study by Bonn-Miller have found only minor reductions in PTSD symptoms, but a high association with problematic use.

Doris Trauner of UCSD has received a grant from Insys and the Noorda Foundation to study cannabis in autism. So far no results to report, other than an Israeli study finding that 61% of parents reported behavioral improvements in autistic kids using cannabis.

Iain McGregor of University of Sydney, GW and Tilray, has received $33 million from the Lambert family to study cannabis in Gervais syndorme. Australian GPs are more accepting of cannabis than specialists, he said. Quality control of CBD products a big problem. The placebo effect is strong. In a survey of epileptic children treated with cannabis, many samples deemed “effective” turned out to contain no CBD or CBDA. Surprisingly, tests of patients given pure THC and 50-50 THC/CBD found equal driving and cognitive impairment. (CBD was not beneficial in this instance.)

Staci Gruber of McLean Hospital noted that studies on cannabis and cognition have focused mainly on young recreational users, not the older medical population. Those exposed to cannabis before age 16 tend to score significantly poorer on cognitive tests, but not those exposed later. Rodent studies suggest that cannabis can help reverse age-related cognitive decline. Her studies of older medical users found reductions in opioid and drug use, reduction in depression, improvements in sleep, improvement in executive function, but the usual memory impairment.

Tom Marcotte of UCSD gave a good presentation on cannabis and driving ability. Some signs of impairment observed in driving studies, but may be offset by subjects’ awareness of their condition. No apparent increase in accidents in Colorado post-legalization; more drivers are being screened for drugs than before. THC less impairing than anti-depressants, hypnotics, alcohol. Need to look at effects of oral dosing.

Alan Budney of Dartmouth apologized for being the one addiction specialist at the forum. His presentation was disorganized, informal and lacking in data. His bogeyman: the “‘popular myth that cannabis is good for everything.”

Yafai was part of the “Real World Cannabis Use” panel. Ryan Vandrey of John Hopkins and Insys spoke on “What’s in real-world cannabis?” He was the first speaker to bring up terpenes and flavonoids, which remain totally unstudied. He complained about the general lack of standardization in current products, poor testing quality control, inadquate labeling, questionable contaminants, etc.

Mahmoud ElSohly spoke about his drug development at the University of Mississippi. He showed pictures of the Ol’ Miss farm, which features both indoor and outdoor gardens. El Sohly’s surveys show a substantial increase over the last 10 years in THC/CBD ratio of cannabis grown in the US —despite the popularization of CBD. This could be because El Sohly tests samples confiscated by law enforcement, not legal products from medical states.

He is working on suppositories. He said that THC by itself useless in suppositories and tampons, it needs to be in modified form of THC-hemisuccinate in order to penetrate. He is also working on glaucoma formulations with longer activity than inhaled/ingested THC, which wear off too quickly. He has a promising formulation that is active for four hours and is seeking to extend it to eight hours.

El Sohly is also doing research on CBD and opioids. He has found that CBD combined with sub-active dose of oxydcodone produces analgesic effects. I asked him about the many cannabis topicals, creams, lotions, etc., on the market. He wasn’t sure about CBD, but THC can’t penetrate the skin, he said. Topicals and suppositories claiming to provide THC are “fakes.” (A  representative from Mary’s Medicinals told me they sell epidermal patches that use a patented carrier to help THC penetrate the skin).

Three manufacturing companies were invited to discuss their activities. Tiffany Devitt of Cannacraft, Lynn Honderd of Mary’s Medicinals, which specializes in transdermal patches, and Catherine Jacboson of Tilray, which is working on childhood epilepsy and has applied to FDA to do clinical trials. Jacobson previously worked with GW on Epidiolex, which should be approved by FDA in the next month or so. After that the DEA must still grant it a special schedule.

The last session featured government officials speaking on regulations and barriers to research. Dominic Chiapperino of the FDA Controlled Substances Office described the agency’s role in cannabis regulation. The FDA oversees the “8-factor analysis” that is required for rescheduling. Chiapperino pointed to the need for larger clinical trails, alternatives to smoked marijuana (e.g., vaporizing), and evaluation of longer-term chronic use. He mentioned that his agency sent 20 warning letters to CBD manufacturers who had nationally marketed products and were making egrergious health claims.

Lori Ajax of BCC outlined her agency’s ongoing efforts to implement state regulations. The emergency regulations have beeen extended to Dec 31, but can’t be extended again; they will shortly be issuing their permanent regulations for comment. Addressing the many concerns expressed at the forum about the quality of existing products, Ajax said that state-regulated products are thoroughly tested and labeled so as to meet requisite standards for product control. There is still a shortage of licensed labs: just 31 out of a statewide goal of 100.

Ellen Auriti, from the University of California’s Office of the President, gave an overview of the many legal challenges to conducting research. Schedule 1 licenses must be had from DEA; state approval by the Reseach Advisory Panel of California (conveniently re-named RAPC from CRAP) is still needed. Indsutrial hemp can only be researched under an agricultural pilot program that hasn’t yet been developed in CA. CBD from hemp is illegal under DEA’s latest rules, upheld by the 9th Circuit Court of Appeal. A  Schedule 1 license is needed to work with CBD. UC must comply with the Drug Free Schools and Communities Act, which requires standards of conduct that clearly prohibit illicit drugs (including CBD). Also. the Drug Free Workplace Act.

Everyone at the forum —including Gust of NIDA— agreed that there was a need for additional sources of cannabis for research. Igor Grant wondered aloud what CMCR could do. Apply for a DEA license? Expensive and uncertain. (A bill to authorize CMCR to apply for a DEA license was killed by the Assembly Appropriations Committee this year.) Work with a private company? But what private company would be willing to invest in FDA drug development, given that so many companies were already able to market their products legally in CA and other states?  (Devitt said that Cannacraft would like very much to work with CMCR.) Given all of the difficulties, Grant ventured that CMCR’s best alternative might be to import products from other countries. (Canada and the Netherlands are the leading exporters of cannabis medicines at present.)

Dale Gieringer is the director of California NORML  —www.canorml.org