Last week the New Yorker posted an article that credited Kamala Harris for blazing the trail for today’s  “progressive” district attorneys. In a letter that won’t get published I went into press-secretary mode for my old friend/boss, Terence Hallinan:

“… Although they were in sync on the major issues of the day, Hallinan became convinced that Harris was a political rival. He was planning to demote her in the summer of 2000 when she left SFDA for the City Attorney’s office, from whence she would run against him and win in 2003. I was Hallinan’s press secretary when this little tragedy played out, and urged him in vain to change course. From my POV, he disrespected Harris and she doesn’t owe him thanks for blazing any trails. But Professor Suk Gersen and the New Yorker owe Terence Hallinan recognition for introducing the very concept of a ‘progressive district attorney.'”

Hallinan’s defining act as a progressive DA was his endorsement of Proposition 215, the ballot initiative by which California voters legalized marijuana for medical use in 1996. California’s other 57 DAs opposed Prop 215, as did every police chief and sheriff in the state, the attorney general, Senators Feinstein and Boxer, President Clinton, former President Jimmy Carter, even the beloved ex-Surgeon General C. Everett Koop, MD.  In 2000 Terence was the only DA to endorse Proposition 36, the treatment-not-incarceration initiative.

The sad truth is that the “progressive” changes Hallinan introduced at the Hall of Justice —diversity in hiring, drug court, mentor court, the first-offender prostitution program, creation of an elder-abuse unit, zealous prosecution of domestic violence cases, to name a half dozen—  could not begin to reverse the escalating social breakdown on the streets of San Francisco. And Hallinan’s job was to enforce the law as it was written. All a “progressive” DA could do, really, was try to give a break to as many offenders who deserved a break as possible.

“Community Court” was one of the reforms Kayo was justly proud of. It was a collaborative effort involving other agencies, but the Assistant DA in charge of misdemeanor rebooking —indispensable, overworked Judith Garvey— played a central role.  “The goal is to unclog the municipal courts by charging fewer misdemeanors,” Kayo explained as I took notes for a press release. “Community members are trained and serve as case arbitrators in low-level crimes that take place in their own neighborhoods. Offenders can make direct restitution by performing community service in the neighborhoods where they committed their crimes.”

As of March 2002, community courts had been created in five San Francisco neighborhoods. I attended a session in the Mission District and wrote it up in detail, hoping to interest a reporter in doing a feature story. (My account is hedded “Note to Rob 3/29/02.” Rob Roth and Rob Selna were both covering the courts at the time, for KTVU and the Daily Journal, respectively.)

• Woman shoplifted from Safeway, sold items back for cash. Got community service.

• Harris, a black man, truck driver out of work since 12/7, arrested for cocaine possession (officer spotted him leaning into a truck). He admits, “We were going to smoke a rock.” Depressed because “child support wanted more than I was making. Plus my rent. Got to keep a roof over my head.”  I asked if he had been in the Teamsters, Thom Batman [head of California Community Dispute Services] interrupted: “Why are we going down that road, he was picked up for crack.” I thought but didn’t say “that road” was what community court was all about. Fined $350.

• Miss R., a student, about 20, beige skin, proud bearing, good looks marred by nose ring. Keeps CD earphones in as she sits down. A security guard observed her testing lipstick on her hand then proceed to another aisle and peel off price tag. She was humiliated and rattled, became belligerent. One similar incident. She works three nights a week with mentally ill. Sent to anger management.

• Mr. G., slender Pilippino man, 30ish, in a yellow sweater. Violated a court restraining order by coming within 1 yard of Mrs. Calderon. But they live in apartments that face each other across a narrow hall, so that if and when they emerge at the same time, he is in violation. Mrs. C. Claims he made “chicken noises” at her. Told to try to avoid her.

• Mrs. V. encountered her husband’s mistress, Edith, on San Bruno. Slapped her and said, “You deserved that” Mr. V.  had moved out to live with Edith.  Anger management for Mrs. V.

•  Abigail H., WF, 35ish baseball jacket, tattoo between thumb and forefinger, holding a prayer book. Observed smoking from glass pipe. Has no idea how she got to city from Pacifica that day, or why she was smoking crack. “I’m an alcoholic.” On SSI. Was in a coma in January or February. In recovery now. No punishment. Exit line: “You don’t have to worry about me, I don’t even like the city, it’s too loony.”

• D and E, half brothers, young white men. Drinking from an open bottle in vehicle. D under 21 and in possession of alcohol. If he went to court, driving record and insurance rates would be affected. They agreed to pay $150 fine.

• Veronica, 18, Spanish-speaking employee of Casa Guadalupe Market. Didn’t ID kids who bought cigs. Says she did but didn’t study date and license she was handed. $200 fine.

• Gary B, 38, works for American Newspaper Group trying to sell subscriptions on the street. Guy named Bolan set up a table next to him, interfered with his pitch. They got into a shoving match. When police responded B. kept trying to explain his side and was charged with resisting arrest. “this has cost me my job.” Decides to appear at arraignment, plead not guilty.

• Teenager, 18, Hollywood handsome. He and friends were standing in front of Black Cat bar when some other guys attacked them. Ran into Black Cat to grab a knife and some glasses to use as weapons. Two days community service.

Community Court is one of Hallinan’s most promising initiatives, and it would be good to get some publicity. The goal is not to convict and punish but to work things out among neighbors. The DA reviews 40,000 to 50,000 misdemeanors/year and, as you know, has four courts in which to try them. Judith Garvey is now sending some 600 cases/month to Community Courts, and says they have a better “fulfillment rate” than 850 Bryant. At the session described above, 19 of 48 defendants showed up.

Community court represents an alternative to the formal criminal justice system. Judith determines which cases are compatible with the program, taking into account the accused person’s arrest record. Clearly criminal matters successfully processed in community court will be put to rest permanently.

“Progressive” reforms can make an oppressive system a little more bearable and a little more efficient.  The community courts that Terence Hallinan promoted in San Francisco qualified on both counts. 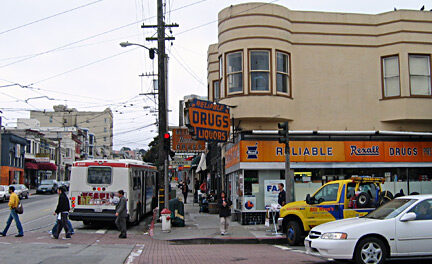