It probably wouldn’t have made any difference if Dr. Igor Grant had addressed the Medical Board of California (MBC) before the members voted to ratify their latest “Guidelines for Recommendation of Cannabis for Medical Purposes.”  But there was a total disconnect between the information about cannabis that Grant shared with the board and the information about cannabis the board is telling California physicians to share with their patients in the “treatment plan” at the heart of their Guidelines.

Much of Grant’s power point presentation covered ground that is familiar to cannabis clinicians —and at least a million educated patients— but was new to the board members, who listened intently. (Board president Dev Gnanadev, MD, thanked Grant for “educating us.”) 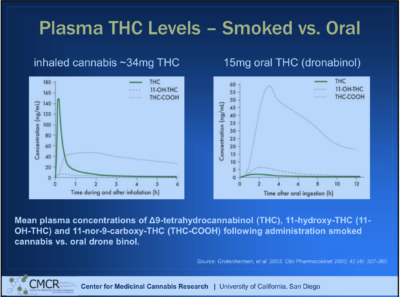 For example, Grant showed two slides contrasting the onset and duration of effects when cannabis is inhaled and ingested. Inhaled cannabinoids travel from the lungs to the brain in a matter of minutes and the effects last less than an hour. Ingested cannabinoids pass through the liver and their effects can last for six-to-eight hours. This difference —familiar to experienced users— may come as news to people using cannabis for the first time, and it is obviously something doctors should make sure that patients understand when issuing approvals.

Unfortunately, doctors adhering to the MBC Guidelines’ “treatment plan” need not inform patients about this and other crucial aspects of cannabis use. They are only advised to discuss potential harms!

The Society of Cannabis Clinicians and your correspondent were so focused on opposing neo-prohibitionist policies in the “Model Guidelines” being pushed by the Federation of State Medical Boards, and then so focused on opposing the egregious “Agreement” and “Decision Tree” adopted provisionally by the California board, that we did not demand revision of the harm-obsessed “treatment plan” at the heart of the Guidelines.

The SCC succeeded in getting the Decision Tree revised so that doctors are not told to not approve cannabis use until patients have failed to get relief from prescription medications. Patient advocate Bill Britt, unaware that the board had agreed to change the Decision, explained why cannabis should be allowed to sit in the front of the bus.

Sherry Yafai, MD, unaware that the board had dropped discussion of the “Agreement” from the agenda, read aloud an eloquent letter critiquing it.

A 60-year old patient of Dr. Yafai’s used the public comment option to say that after 13 years of opioid use for pain, cannabis had helped him get off 120mg/day regimen.

Some comic relief at the meeting was provided by Howard Krauss, the LA opthalmologist who has never approved cannabis use but was the only physician on the task force that drafted the MBC guidelines. Krauss had wanted the MBC to adopt the prohibitionist “Model Guidelines” being pushed by the Federation of State Medical Boards, whose annual meetings he has enjoyed attending.  Krauss expressed regret that he would not be going to this year’s FSMB conference in North Carolina and next year’s meeting in Texas because California won’t reimburse for travel to those states. Board member Brenda Sutton-Wills quickly put in a word of support for California’s policy.

Krauss also expressed regret that he had made “a small investment in a Canadian medical marijuana company” and would have to abstain from voting on agenda item 27. 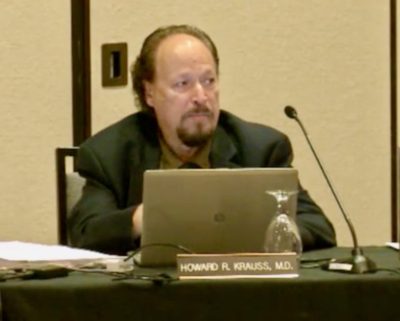 Maternal Mortality Rate Rises in US