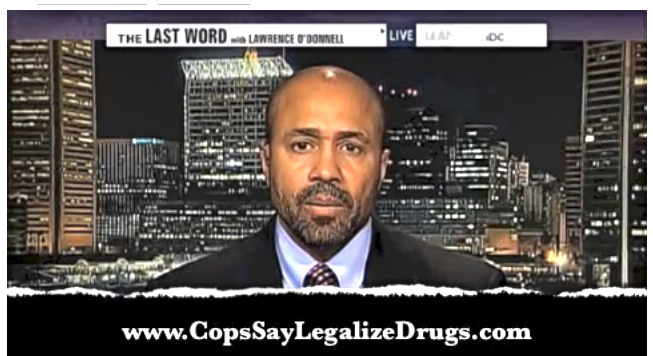 It’s not often that we hear a drug policy reform leader tell the blunt truth about decriminalization. They usually promote decrim as “a step in the right direction,” “advancing the conversation,” etc. etc. Decriminalization reduces a first bust for marijuana possession from a misdemeanor to an infraction. The person with a joint is still an “offender” in fear of encountering the police, not a law-abiding citizen.

We were very glad to hear Neill Franklin, the director of Law Enforcement Against Prohibition, succinctly explain to MSNBC’s Lawrence O’Donnell why decriminalization is a meaningless demand. O’Donnell’s show is called “The Last Word” and Franklin got it in. Bravo, Major!

The segment quoted here was entitled “Could Obama Decriminalize Drugs?” 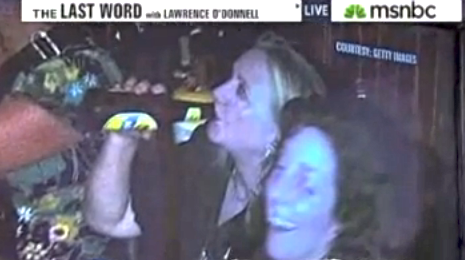 Lawrence O’Donnell: There’s Hillary Clinton in Cartagena, Colombia this weekend, enjoying her drug of choice, perfectly legally. While alcohol, which George Will calls “the only addictive intoxicant currently available as a consumer good,” continues to wreak havoc in America, supported by a $6 billion-a-year alcohol-industry advertising campaign extolling the joy of inebriation, the far less harmful drug of marijuana remains illegal and continues to ruin people’s lives (pauses two beats) only if they are caught possessing it and convicted of that crime.

New York Times columnist Charles M. Blow noted in a column last year that despite the fact that whites engage in drug offenses at a higher rate than African-Americans, African-Americans are incarcerated for drug offenses at a rate that is 10 times greater than that of whites. Joining me now is Charles M. Blow, opinion writer for the New York Times.

First of all, Charles, would you like an Aguila? (Offers him a bottle of cerveza from a 12-pack on his desk, which Blow accepts with a smile.) That’s Hillary’s beer. My confession is, I can’t stomach —I’ve never had a beer in my life. This is my darkest secret. I’ve never been drunk in my life. I’ve never been high in my life. So I am the least qualified person to talk about the effects of drugs and…

Charles Blow (laughing): You’re shifting the qualifications to me?

O’Donnell: No, I’m shifting the worry to the father of teenage boys. Because that’s really where the biggest worry is —parents of teenagers. I’m the parent of a teenage daughter. And that’s the center of worry in this country about legalization or decriminalization —simply saying, “you won’t go to jail for this.” Legalization would be, you can now have, you know, marijuana sold at Seven-Elevens. That’s different from just decriminalizing.

O’Donnell: Youth in America has survived for quite a long time with exposure to a much more dangerous drug. I’ve had friends drink themselves to death as very young people. And there seems to be no ability to recognize how dangerous alcohol is, where we think that marijuana is the end of the world .

Blow: And I don’t think we even think that. I just think that it has become part of the culture that we have now embedded: this idea that marijuana is a pathway to more illicit drug use. You know, “It’s a stepping off point.” So now we are incarcerating people at a staggering rate. Since 1971 there have been 40 million drug arrests in America. That’s just a staggering number of people. And that means that those people are now disenfranchised. If they had a kid, they can no longer support that child. So now that child is on the public dole, possibly, because the parent —the mother— can’t support the child by themselves. They are taken out of the community. People complain about, you know, too many young black women having children out of wedlock. Well, they take out a lot of the guys that would be marriage material if they didn’t get caught with one or two joints or something in their pocket. If they were going to go to school or were working at the time… You know, under Clinton was the signing of this law [the Higher Education Act] that basically said you couldn’t get federal financial aid to go to college if you’d ever been arrested for a drug offense. So you had this kind of imbalance of people not being able to go to college and become marriage material.

O’Donnell: Joining us now is Neill Franklin, executive director of L E A P, Law Enforcement Against Prohibition, and he’s a retired Maryland State Police major, where he also served as a narcotics agent. Neill, what’s your experience with this and where should we go from here?

Neill Franklin: Lawrence and Charles, glad to be here with you guys. “Where should we go?” Well, you mentioned decriminalization, you talked about legalization and the difference between the two. There’s a lot of talk for decriminalization. I don’t think that’s the way to go. We need to go for legalization. We need to have regulation and control, and here’s why. With decriminalization, we crime fighters, we in the law enforcement community, you know, we will figure out a new strategy for targeting young Black and Latino men. Instead of arresting people for possession, we’ll just figure out a strategy for charging them with intent to distribute and other things. So it’s important that we go for legalization, regulation, and control.

O’Donnell: what was your experience that turned you against the war on drugs that you were a soldier in for so long?

Franklin: Lawrence, it was the violence. I wear this badge here on my lapel and i usually wear a shroud over it, because i lost a dear friend, a comrade, to this craziness, to this senseless war on drugs. His name was Ed Totely, in Washington, DC. He was working undercover with the FBI in 2000 and he was assassinated, making a mid-level drug buy. That woke me up. And many people are waking up today to this nonsense. Unfortunately, for me it was that violence.

O’Donnell: Do you sense a possibility in President Obama ‘s second term on this front? You have George Will in agreement with Neill, a former narc, based on his experience out there in the field. And the president saying he’s open to a discussion that the law is doing more harm than good?

Blow: I hope that President Obama moves in this direction. I think that the president has some making up to do on this front.

There was no news hook for the segment called “Could Obama Decriminalize Drugs?” Its intent was to keep hope alive among voters dismayed by the federal crackdown on growers and dispensaries in the medical marijuana states. (Note that no raids went down in the swing state of Colorado.) MSNBC News is evidently a p.r. auxiliary of the Democratic Party. The evening talking heads include Chris Mathews, Rachel Maddow, Ed Schultz, and Al Sharpton. Calm Lawrence O’Donnell replaced fiery Keith Olbermann in January, 2011, and turned out to be more outspoken and radical. O’Donnell is so gentlemanly and wry that he gets away with saying some far-out things. 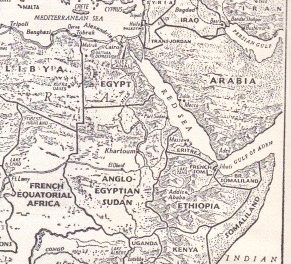 Ethiopia at the end of World War Two