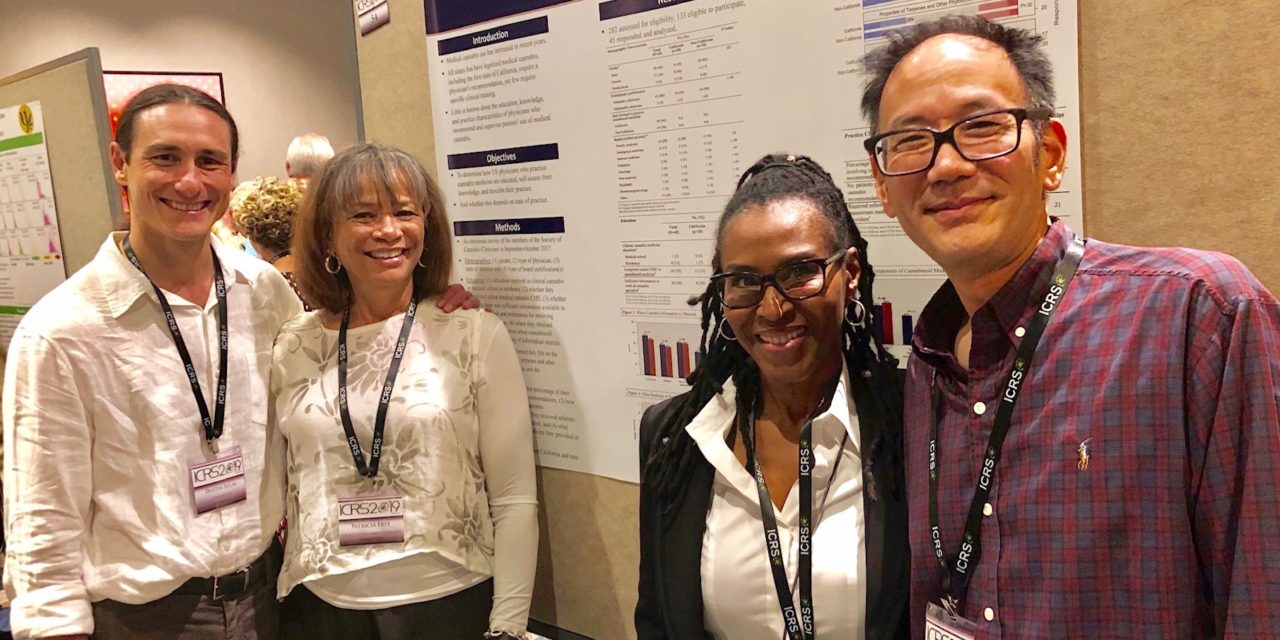 FG: How did your poster  come to be?
KT: It started as the “needs” survey that was sent out by Dustin Sulak for the SCC (Society of Cannabis Clinicians). He asked if I would be willing to turn it into somethng suitable for publication. I turned it into a “knowledge-education-practice characteristics of cannabis clinicians” survey, and wrote it up as a paper, and submitted that to CCR ( the journal Cannabis and Cannabinoid Research). I also thought that it might be nice to have a presence for SCC at the ICRS meeting, so I turned the paper into a poster as well and submitted it.
FG: Your impressions of the conference?
KT: I thought the experience was really great. I learned a lot about the ICRS. I hadn’t realized that they’re mostly focused on basic science research. I thought putting up the poster was a nice way to talk about the clinical aspects and introduce SCC to the ICRS.
FG: It was a re-introduction. Tod Mikuriya had two posters at the ICRS meeting in Acapulco in 1999. One was his master list of how many patients were using marijuana to treat which conditions. I think the other was a call for rescheduling. Tod wanted cannabis to be classified in an entirely new class of drug, befitting its unique mechanism of action of range of effects.KT: Thank you for maintaining the institutional memory of SCC. We sometimes forget about the pioneers who really brought cannabis back into the light and allowed the people to reclaim this potentially important therapeutic.No sooner had I put up the poster than I had a chance to meet with the publishers of CCR, Mary Ann Liebert, and Bob Vrooman. Danielle Piomelli , the editor of CCR, happened to be there. So three SCC board members —Patricia Frye, Dustin Sulak and I met with them at the start of the poster session. I didn’t want to miss a chance to talk about the poster and the SCC, but I thought meeting the CCR group was more important.
We urged them to publish more clinical cases. We told them that clinicians in the SCC had been practicing cannabis medicine for 20 years and could provide a wealth of information for their journal. I actually pushed the idea of every issue having a case report in their journal. I offered to be an editor, or a guest editor, for the clinical papers in their pipeline. I had submitted two papers to CCR, and their reviewers demonstrated in their questions, at least in one of the papers, that they didn’t know much about ethical cannabis clinicians, what they do, or the nature of their practice.
I also had the impression that Mary Ann Liebert and Bob Vrooman didn’t know what cannabis clinicians do. I thought it would be really valuable to publish: what defines a cannabis clinician? What do they do differently than, say, an internist? I’m not talking about the mills that just issue “medical” cards, but about the real specialists in the SCC. It would be useful to publish our own practice guidelines.
FG: It might not be an easy task.
KT: One of the things that I’ve learned is that everyone recommends cannabis a bit differently. Some doctors actually recommend products.F: What product to use is a big part of what patients want to know. There are a lot of products on the shelves, which ones do you trust? It’s a logical question to ask a doctor who is supposed to have some expertise.
KT: The SCC should have some standards or some guidelines on this question/
F: The policy of not advising patients where to obtain and what to obtain goes back to 1997, in the months after Proposition 215 passed. The Clinton Administration tried to pull the licenses of doctors who approved marijuana use. A federal judge ruled that doctors and patients are protected by the First Amendment when they discuss cannabis as a treatment option. The court noted that when a patient actually obtained cannabis, they would be in violation of federal law, and if the doctor had advised them where to buy cannabis and/or what to buy, the doctor would have aided and abetted a federal crime. That’s why SCC docs refrained from recommending products and O’Shaughnessy’s —which the doctors were passing out to patients— carried no ads for products or dispensaries. But to this day, as far as I know, no doctor has ever been charged with aiding and abetting. So over time that wall just came down. And now it seems to be common practice. HelloMD does it openly online.
KT: Yeah, I was interested to hear that that’s what people are doing. Maybe that’s the accepted practice now. I know that Jeff still abides by the whole aiding and abetting thing. But maybe we’ve moved past that.
KT: My last email from Bob Vrooman was, “Well, let’s see if we can formalize the relationship between SCC and the CCR.” Jeff told me the hold-up was a monetary thing.

FG: I think if the SCC would pay for an affiliation, and members would get their journal in the mail. I forget what they were asking, but it seemed expensive.
KT: I’m wondering if there’s a way to formalize the relationship without having the SCC spend a lot of money.
FG: I would hope so. Do they see us as allies deserving a deep discount or just another another trick? Ally or client?
KT: That’s the question. Because I don’t understand what they need the money from SCC for.
FG: Because their kids have to go to college.
KT: A lot of the articles in CCR are open access. The author has the option. You can opt to pay a fee for your article to be published.
FG: You mean ‘published’ in the scientific journal sense, not the English language sense.
KT: I hope that we can establish a relationship, because CCR would be really great place to publish the SCC experience in research.
FG: I hope they’ll run SCC members’ can reports whether we are or aren’t in a business relationship with them.
KT: I hope you’re right. When wespoke to Bob and Mary Ann, Dustin said, “Hey, I think you guys should have more clinical articles, and you should have case reports.” We were kind of brainstorming on the spot. And I know that that night they had a meeting amongst the editors of the journal, and Bob brought up the issues about more clinical and case reports, and he said he got a very positive response from the people who were there.
FG: Getting back to you poster. Did the ICRS members ask poignant questions? Any interesting interactions?
KT: Most people did not seem interested in what was being presented. I think it’s because most of the people there are basic scientists. So the basic science posters seemed to get a lot more attention, more questions. I did speak to a few people, and for most of them, it was a first introduction to what SCC is and what we do.
FG: Were there many other MDs at the meeting?
KT: I don’t know. My perception was that most people were PhDs.
FG: In terms of the talks you heard and the posters that you saw, what was particularly memorable?
KT: On the first day they did a really nice job of including clinical data and the talks seemed really relevant to SCC and what we do. The next couple of days were much more basic-science focused. Talks about receptor pharmacology and endogenous signaling systems–very advanced science, difficult to follow unless you’re a bench scientist.. I appreciated the networking oppostunities. I established a relationship with Antonio Vigano, who is taking over for Mark Ware at the Quebec Cannabis Registries. They have clinical data, and he wanted to explore a way we could compare or share data amongst our groups. One idea was to do a paper comparing use patterns in the US and Canada. That might be really interesting.
FG: Did I leave out anything you wanted to share with SCC members?
KT: I’ll say that the people at the conference were really quite friendly, and the organizers were very open to having clinicians there. We met the chair of next year”s ICRS meeting —it’s going to be in Ireland.

Kevin Takakuwa, MD, is head of the Society of Cannabis Clinicians’ research committee. The paper on which his ICRS poster was based has been accepted for publication by Cannabis and Cannabinoid Research. 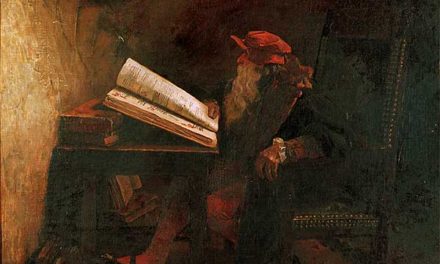