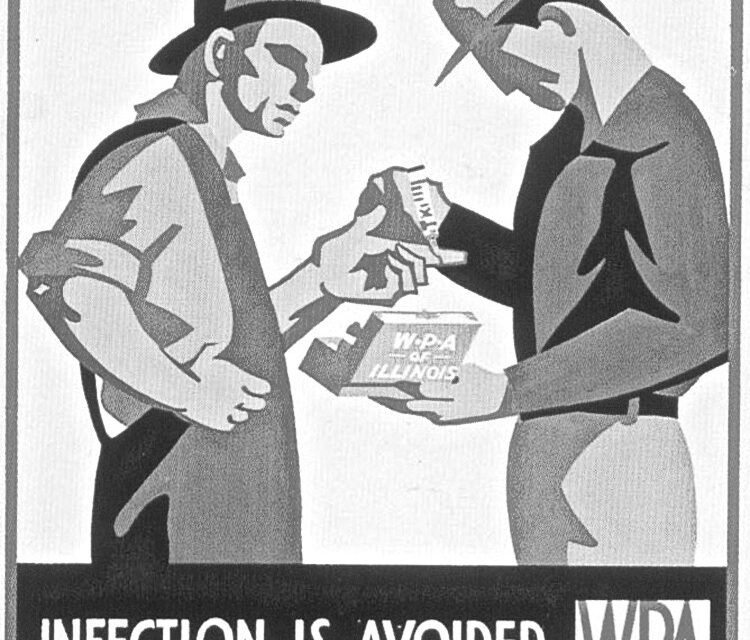 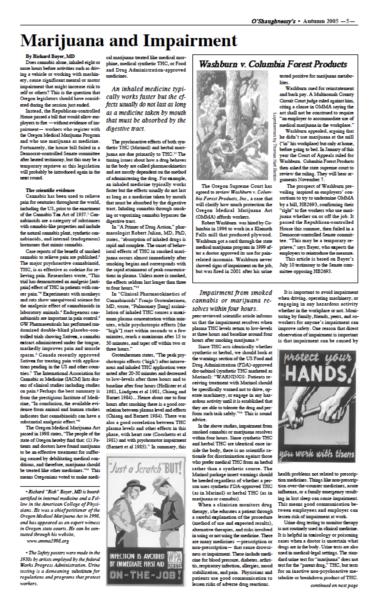 Does cannabis alone, inhaled eight or more hours before activities such as driving a vehicle or working with machinery, cause significant mental or motor impairment that might increase risk to self or others? That is the question, properly stated, that legislators should have considered during the session just ended.

Instead, during the 2005 legislative session, Oregon House Bill 2693 passed the Republican-controlled House. HB 2693 would allow employers to fire —without evidence of impairment— Oregonians who register with the Oregon Medical Marijuana Program and who use marijuana as medicine. Fortunately the house bill failed in a Democrat-controlled Senate committee after heated testimony, but this may be a temporary reprieve as this impaired piece of legislation will probably be introduced again in the next round.

Cannabis has been used to relieve pain for centuries throughout the world, including in the US, prior to the Cannabis Tax Act of 1937. Cannabis-like compounds are called cannabinoids. The cannabinoid that most affects mental status, the one that has “psychoactive” effects, is THC, or tetrahydrocannabinol. THC is a highly effective pain reliever, equal in efficacy to codeine. GW Pharmaceuticals has performed randomized double-blind placebo-controlled trials showing that Sativex (a cannabis extract now available in Canadian pharmacies ) markedly reduces pain. Institute of Medicine investigators concluded in a 1999 Report: ” the available evidence from animal and human studies indicates that cannabinoids can have a substantial analgesic effect.”

The Oregon Medical Marijuana Act ( OMMA ), passed in 1998, states, ” . . . marijuana should be treated like other medicines.” Once inside the body, THC acts identically whether it comes from herbal cannabis or from synthetic Food and Drug Administration-approved THC ( Marinol, brand name of dronabinol ). Either way, the major psychoactive cannabinoid remains THC so let’s examine how THC is metabolized and experienced by the human body.

In “A Primer of Drug Action,” pharmacologist Robert Julian, MD, PhD, wrote, ” . . . absorption of inhaled drugs is rapid and complete. The onset of behavioral effects of THC in smoked marijuana occurs almost immediately after smoking begins and corresponds with the rapid attainment of peak concentrations in plasma. Unless more is smoked, the effects seldom last longer than 3 to 4 hours.”

In the Journal of Cannabis Therapeutics, Franjo Grotenhermen, MD, wrote, “Pulmonary [lung] assimilation of inhaled THC causes a maximum plasma concentration within minutes, while psychotropic effects [the “high”] start within seconds to a few minutes, reach a maximum after 15 to 30 minutes, and taper off within 2 or 3 hours.” In summary, any mental or motor “impairment” is associated with the psychotropic effects ( the “high” ), and these effects are equally associated with pain relief. When the plasma THC levels return to low-levels at 3 hours and baseline around 4 hours after smoking marijuana, the high resolves, and so too does any impairment.  This is important: no impairment after 3 or 4 hours from taking THC.

Marinol is available only by mouth but the package insert warnings should be heeded regardless of whether a person uses Marinol or herbal THC. These include: WARNINGS: Patients receiving treatment with Marinol should be specifically warned not to drive, operate machinery, or engage in any hazardous activity until it is established that they are able to tolerate the drug and perform such task safely. This is sound advice.

When a clinician monitors drug therapy-any drug therapy-s/he educates a patient through careful explanations of procedures ( method of use and expected results ), alternative therapies, and risks involved in using or not using a medicine. There are many medicines-prescription or nonprescription-that cause drowsiness or impairment. These include medicine for blood pressure, diabetes, arthritis, respiratory infection, allergies, mood stabilization, and pain. Good communication lessens risks of adverse drug reactions.

Whether in a workplace or not, one should avoid impairment when driving, operating machinery, or engaging in any hazardous activity. If the goal is safety, there is no substitute for actual observation of performance because impairment can have many sources. Non-prescription medicines, acute illness, or sleep loss can result in impairment. Good communication between employees, supervisors, and employers lessens risk of impairment at work.

With all of the above in mind, here is the crux of the problem so ineffectively addressed by the sponsors of House Bill 2693. The standard urine test for “marijuana” does not test for the psychoactive “parent drug”, THC. It only tests for an inactive “metabolite” or breakdown product of THC. Even without physical evidence of impairment, inactive metabolites can be present for weeks to months after consuming cannabis. Less frequent users clear cannabis metabolites from their urine faster than regular users. The US Department of Transportation says, “While a positive urine test is solid proof of drug use within the last few days, it cannot be used by itself to prove behavioral impairment . . .”. Here, even the federal government agrees urine drug testing does not prove impairment.

If the flight simulator testing machines are made difficult enough, then at least one researcher, Dr. Leirer, demonstrated what he called a carry-over or “hangover” effect up to 24 hours later. Such a hangover effect is also seen with commonly used medicines or alcohol. The purported hangover effect is described by Leirer as “very marginal” and is only detected in tests of “very complex human/machine performance”. Comparable, subtle effects are reported at very low blood alcohol levels of 0.025% ( 25 milligrams of alcohol per 100 milliliters of blood ). Even if a hangover effect can be measured by a researcher in persons using alcohol, marijuana, or prescription drugs 24 hours after ingestion of a drug, our laws for alcohol do not consider 0.025% significant impairment. This alleged hangover effect causes less impairment than the 0.04% level considered the safe level for commercial motor vehicle drivers and far less than 0.08%, the standard threshold for drunk driving. In other words, flight simulator data actually demonstrate smoked cannabis beyond 4 hours causes no significant impairment by currently accepted medical-legal standards.

In light of confusing computer flight simulation data, other researchers study real motor vehicle accidents. In 2002, authors Gregory Chesher and Marie Longo concluded, “At the present time, the evidence to suggest an involvement of cannabis in road crashes is scientifically unproven”. However they note this may only reflect the evolving science since testing for inactive urine metabolites does not prove impairment.

Because urine metabolites do not indicate impairment, some scientists measure the parent drug responsible for impairment. Dr. Drummer measured blood THC levels in fatal crashes in Australia and noticed an association between high THC levels and risk of traffic fatality even in the absence of other drugs. Using forensic evidence he determined whether a driver is “culpable” or responsible for the fatal accident and correlated it to blood THC levels. Drummer and colleagues conclude, “Recent use of cannabis may increase crash risk, whereas past use of cannabis does not”.

Even if one supports using parent drug blood THC levels as a marker for impairment, it remains unclear how to define the gray area about what is “recent” versus “past” use of cannabis. This is because the THC level below which there is no impairment varies dramatically among individuals. Plus, the actual numbers of persons who have only THC in the blood and are involved in accidents is low so current studies lack the statistical significance necessary to draw firm conclusions.

Since no culpability for fatal automobile crashes exists below blood levels of 10 nanograms per milliliter ( ng/ml ), those concerned about legislation suggest that any proposed thresholds be above 10 ng/ml of blood THC. For more information about legislative considerations see: You Are Going Directly To Jail: DUID Legislation: What It Means, Who’s Behind It, and Strategies to Prevent It by Paul Armentano: www.norml.org/index.cfm?Group_IDd92

A study using coordination testing showed inevitable failure on field sobriety testing if blood THC levels were 25 to 30 ng/ml. But, many failed testing at 90 and 150 minutes after smoking even though plasma concentrations were rather low. The researchers had the foresight to conclude that “establishing a clear relation between THC plasma concentrations and clinical impairment will be much more difficult than for alcohol”. This is because alcohol and THC are chemically different and are metabolized differently inside the body.

With medical marijuana laws, we need research to show if there is a correlation between clinical impairment and blood THC levels. Daily cannabis users ( like patients ) can have levels as high as 6 to 10 ng/ml without clinical impairment even after 24 or more hours of abstinence. Most experts think it is premature to make firm conclusions about the proper threshold of blood THC as a marker for “Driving Under the Influence.”

There is no scientific evidence showing significant impairment beyond four hours from smoking marijuana. There is no scientific evidence of increased risk of motor vehicle accidents beyond four hours after smoking marijuana. No physician would routinely condone medical use of cannabis or other sedating drugs at work. But, careful consideration of the recommendations in the Marinol package insert for synthetic THC preserves safety and would be consistent with medical treatment plans for other medicines that can impair. We have FDA-approved guidelines for synthetic THC and we should use these same guidelines for herbal THC.

Registration in the Oregon Medical Marijuana Program should never be sole cause for termination of employment. Medical use of marijuana within Oregon law should be treated like medical Marinol, medical morphine, and other medications, both in and out of the workplace. It is discriminatory to fire an unimpaired worker whose only cause for job termination is registration with the Oregon Department of Human Services Oregon Medical Marijuana Program. Let us hope that we won’t see the sequel of House Bill 2693 surface in the Oregon legislature next session, and if we do, let us work to defeat such misguided and damaging public policy.

Richard “Rick” Bayer, MD is board-certified in internal medicine, a Fellow in the American College of Physicians (FACP), and practiced in Lake Oswego for many years. He is a co-author of: “Is Marijuana the Right Medicine For You?,” a chief-petitioner of the Oregon Medical Marijuana Act in 1998, and has appeared as a medical cannabis expert witness in Oregon state courts.  For additional references see: www.omma1998.org