Back in 1994  NIDA director Alan Leshner told Dr. Donald Abrams with a smirk that his proposal to study cannabis in the treatment of AIDS had been turned down because “NIDA is the National Institute on Drug Abuse, not the National Institute for Drug Abuse.” I was just beginning to cover the medical marijuana story in earnest; soon I would learn more about Alan Leshner. Although the current head of NIDA, Nora Volkow, is a real scientist (Leshner was a clinical psychologist), the inherent bias of the agency has not changed much over the years.  Would-be researchers and cannabis proponents have long been aware of NIDA’s neo-prohibitionist bias, but it has not been thoroughly documented. Now it has been  The following report by Cathleen O’Grady ran in Science August 27, 2020. —FG

A new analysis of cannabis research funding in the United States, Canada, and the United Kingdom has found that $1.56 billion was directed to the topic between 2000 and 2018—with about half of the money spent on understanding the potential harms of the recreational drug. Just over $1 billion came from the biggest funder, the U.S. National Institute on Drug Abuse (NIDA), which doled out far more money to research cannabis misuse and its negative effects than on using cannabis and cannabis-derived chemicals as a therapeutic drug.

“The government’s budget is a political statement about what we value as a society,” says Daniel Mallinson, a cannabis policy researcher at Pennsylvania State University, Harrisburg, who reviewed the funding analysis provided to Science by the consultant who conducted it. “The fact that most of the cannabis money is going to drug abuse and probably to cannabis use disorder versus medical purposes—that says something.” The data confirm “word on the street” that government grants go to research that focuses on harms, says Daniela Vergara, who researches cannabis genomics at the University of Colorado, Boulder.

However, overall cannabis research funding in the United States is rising steadily, from less than $30.2 million in 2000 to more than $143 million in 2018, and money to explore cannabis medical treatments is growing—although not as fast as funding for research on harms.

The analysis is based on a database assembled by Jim Hudson, a consultant for medical research charities and government agencies, who collected publicly available grant data from 50 funders, including public agencies such as the U.S. National Institutes of Health and charities such as Canada’s Arthritis Society. Based on his own reading of the 3269 grants that included cannabis-related keywords, Hudson classified each into categories that captured the focus of the research.

Compared with the $1.49 billion spent by the United States over the 19-year period, Canada spent $32.2 million and the United Kingdom $40 million. Whereas U.K. spending was similarly dominated by research on the harmful effects of cannabis, Canada’s funding focused on the endocannabinoid system—the body’s own system of cannabinoid receptors and naturally produced endocannabinoids that bind to them. 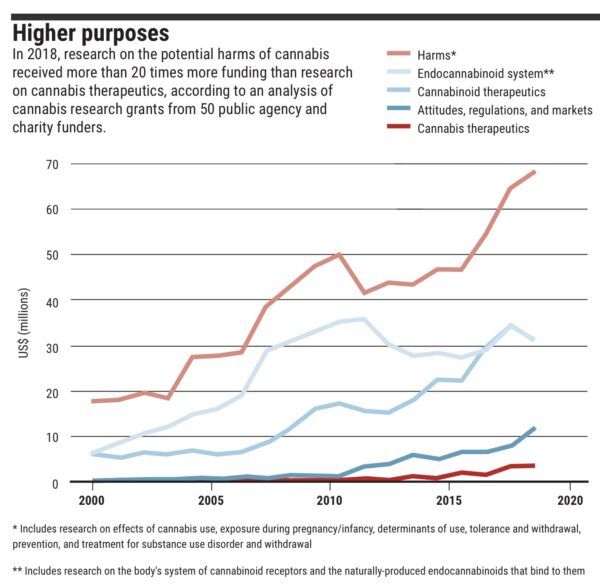 The tools Hudson developed to access and sort the public grant data are ultimately destined for his consulting work on cancer research funding, but he says the much smaller field of cannabis offered a bite-size test drive. Hudson made the broad findings public on his website today, although the raw data behind the analysis are not. It’s the first attempt to consolidate cannabis grant data from a wide range of sources and classify it, says Lee Hannah, a cannabis policy researcher at Wright State University, and it’s useful to see “how the lion’s share in the U.S. remains focused on negative consequences and prevention.”

The analysis also hints at the legal hurdles to studying cannabis. In 2018, the $34 million spent by the three countries on cannabis medical treatments was dominated by research on cannabinoids—chemicals found in cannabis—rather than the cannabis plant itself.

This is probably in part because of practicality, Vergara says: It’s often easier for researchers to work with isolated compounds and create regulated doses than to use the whole marijuana plant with its psychoactive properties. But in the United States, it’s also difficult to get governmental permission to use the whole plant for research, she adds. Right now, the only legal producer of cannabis for research in the United States is the University of Mississippi, which grows cannabis that is less potent than recreational pot.

Although NIDA still dominates cannabis research funding, both nationally and internationally, new sources have appeared in recent years. The U.S. Department of Defense has spent a few million dollars on cannabinoid research over the past few years, and, in 2014, the Colorado Department of Public Health & Environment created a medical marijuana research program. That’s part of a wider pattern of U.S. states legalizing cannabis and setting money aside for research despite ongoing federal restrictions, Hannah says.

The analysis isn’t an exhaustive picture of worldwide cannabis research, because it only captures public data from a short list of countries. Despite a reputation as a major center of cannabis research, Israel doesn’t feature, although Hudson hopes to expand the list of included countries and funders. The analysis of NIDA funding does not distinguish between money for outside scientists versus the institute’s own researchers. And Mallinson points out that there’s no record of the private research funding that has increased recently, like Harvard Medical School’s International Phytomedicines and Medical Cannabis Institute, which has received funding from Canadian cannabis producer Atlas Biotechnologies and other companies.

The limited funding for therapeutic research is part of a vicious circle, Mallinson says: Research is restricted because the U.S. Drug Enforcement Administration lists marijuana as a Schedule I drug, meaning it is considered to have high potential for abuse and no evidence for medical benefits—but the threshold needed to

demonstrate evidence of medical benefits is hard to reach because the research is restricted. “It’s difficult to break that,” Mallinson says.

Putting marijuana on the less-restricted Schedule II list, alongside such drugs as oxycodone, felt “inevitable” more than 10 years ago, Hannah says, but no change has yet materialized.