From Jeffrey Hergenrather, MD, May 24   I wanted to send a note about my visit to the “United in Compassion” the UIC conference that I attended in Sydney, NSW, Australia last weekend.  It was well attended, about 1000 paid attendees, led off with nice comments from the Premier of New South Wales, Mike Baird.  Mike had befriended Daniel, a twenty something year old man who died a couple years ago of metastatic colon cancer.  Daniel was the son of Lucy and Lou Haslam, the founders and executive director of the UIC.

The UIC made quite an effort to market the two day conference to physicians in eastern Australia, but not unlike the US, it was only attended by a couple of physicians.  As in the US the doctors are uneducated about cannabis, think of cannabis as a drug of abuse, and don’t have the time to get involved.

The speaker list was more medically oriented than ICRS and IACM conferences.  More-or-less comparable to Patients Out of Time.  What I appreciated was the length of the presentations, unlike most of the other cannabis/cannabinoid conferences.  I had about 75 minutes to present an 89 PPT slide set.  I’d be happy to share it with you all on my return.

The doctors that are interested in cannabis here in Australia are a bit on the fringe of the profession, not unlike the USA.  There is a core group of UIC advocates lead by Dr. David Caldicott from Tasmania, who are very intent on getting a chapter of the SCC started here.  I agreed in principle though we didn’t get into any details of the effort pending discussion with our board.  I was able to share a couple copies of O’S with Lucy, who was excited about presenting it to her government official contacts.  We will send more.

I’ll attach a copy of the index of the program. Best wishes from down under, 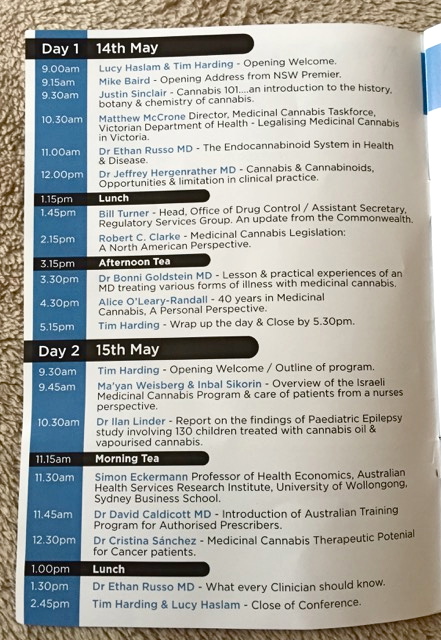