The neoprohibitionists are conducting a concerted campaign to discredit the findings of cannabis clinicians in the name of ‘Evidence-Based Medicine.’ The following is from page three of the National Academy of Sciences Report, released in January 2017 (which we have previously referred to as IOM 2.0):

“The scientific literature on cannabis use has grown substantially since the 1999 publication of Marijuana and Medicine. The committee conducted an extensive search of relevant databases, including Medline, Embase, the Cochrane Database of Systematic Reviews, and PsycINFO and initially retrieved more than 24,000 abstracts that could have potentially been relevant to this study. These abstracts were reduced by limiting articles to those published in English and removing case reports, editorials, studies by “anonymous” authors, conference abstracts, and commentaries. In the end, the committee considered more than 10,700 abstracts for their relevance to this report.” 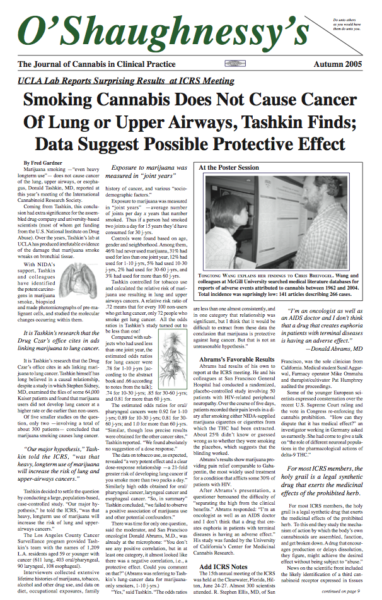 It makes sense to exclude editorials, commentaries and  papers for which no one claims attribtion, but why ignore findings reported at scientific conferences? The International Cannabinoid Research Society subjects all proposals for presentations at their annual symposium to a peer-review process. It was at the 2005 ICRS meeting that UCLA pulmonologist Donald Tashkin reported the results of his monumental study showing that cannabis smoking does not cause lung cancer, and might even exert a protective effect. O’Shaughnessy’s reported Tashkin’s findings soon thereafter. Were those findings not valid until they were published in Cancer Epidemiology Biomarkers in October 2006? (The delay and the relatively obscure journal in which Tashkin et al finally published were a function of political pressures having nothing to do with Truth or Science. The prohibitionists in the biomedical establishment hated to give up the image of cannabis as a carcinogen.)

And why don’t case reports constitute evidence when it comes to the efficacy of a medicine —especially when doctors aggregate them, as members of the Society of Cannabis Clinicians have done over the years?

Dr. Raphael Mechoulam, whose towering research achievements include figuring out the stereospecifics of THC and CBD and identifying the first endogenous cannabinoid, Anandamide, takes case reports with the utmost seriousness, as illustrated here. The two case reports on cannabis alleviating the symptoms of autism that Mechoulam treated with respect were published by Philip A. Denney, MD —a cannabis clinician who well might have been investigated by the Medical Board of California if the proposed algorithms were in place at the time we published them.

It is well known that cannabis use helps cancer patients bolster appetite and reduce the nausea brought on by chemotherapy.  My experience as a physician specializing in cannabis therapy suggests that cannabis also has direct anti-cancer properties.  Some patients with metastatic cancers find that regular use of cannabis is associated with stopping or reducing the spread of cancer.  Here are three case reports involving patients with confirmed diagnoses of metastatic cancer.

P.J., a 50-year-old man, was still enjoying motorcycle riding and surfing when he began having right parietal headaches with increasing frequency and severity in the spring of 2003. Within three weeks from the onset of pain, P.J. saw his primary-care doctor, who advised OTC pain medications. A few weeks later the pain worsened and he began to drop things from his hands and slur his speech. On hearing this the doctor sent him to the ER for a brain scan. P.J. was found to have a large stage-4 brain tumor, subsequently diagnosed as a glioblastoma multiforme. P.J. got his brain surgery in July ’03 followed by radiation therapy; he was also referred to a study group at a major teaching hospital.  Now, more than four years since his surgery, P.J. continues to improve despite the ominous prognosis with the diagnosis of glioblastoma multiforme. Untreated patients are found to live about three months from diagnosis. Treated patients have a median survival of 10-12 months. In the best case scenario people with this tumor are alive at 18 months and apparently very few are still alive after five years.

What’s different in P.J.’s case is that everyday he eats at least five cannabis capsules that he prepares for himself.  The cannabis helps P.J. with his appetite and sense of well-being.

Of great interest is the fact that he has been seizure-free and there has been no recurrence of the tumor on  his follow-up brain scans, MRI and PET scans (conducted three or four times per year since 2003). Just back from a road trip to visit family, P.J. is out riding his bicycle on the rural roads with increasing confidence and he has re-applied for his driver’s license.

Nick was 6 years old when diagnosed with Stage 3 neuroblastoma, later diagnosed as Stage 4 relapsing refractory neuroblastoma. He was enrolled in a metastatic neuroblastoma study group at UCSF for state of the art therapy.  After about two and a half years all of his cohort group had died and Nick was in trouble.  He had undergone numerous surgeries and numerous rounds of chemotherapy and radiation therapy.  He had been a year on naso-gastric tube feedings and a year on TPN, total (IV) parenteral nutrition.  Fearing they were losing him, his parents took 9-year-old Nick to Tod Mikuriya, MD, a pioneer in cannabis therapy.  At the recommendation of Dr. Mikuriya, Nick’s parents began using cannabis for his pain, appetite, anxiety, and sleep. No medications worked as well as cannabis for these symptoms, according to Nick. He was referred to me at age 11 when his family moved to my town.  He continued to use cannabis frequently as needed for pain, nausea, loss of appetite, and mental ease.  Nick’s cancer went into remission when he was 13 years old.

Last year at the age of 16 Nick died of sepsis from a perforated bowel —a complication of the extensive scarring and organ damage from his many surgeries and treatments. A few of the oncologists and research scientist wanted to know what Nick’s parents had done differently since they had never seen remission after such widespread refractory disease and prolonged treatment.  When Nick’s mother asked if this was a good time to talk about cannabis, the researchers fell silent, as this course of action was unacceptable in the clinical trial protocols.  Despite the fact that their son had survived this cancer the use of cannabis could not be discussed for fear of compromising the cancer study. Nick’s oncologist acknowledged that he had  “bought many years of life” by using cannabis. The neuroblastoma researchers may still invite Nick’s mother to speak at a neuroblastoma conference in the future, but for now his remission has not been attributed to his cannabis use.

DS is a 53-year-old woman who at the age of 27 had a malignant melanoma removed from her left arm.  She reports that the mole was misdiagnosed by her physician as a benign lesion that could be treated topically. The lesion was left to grow for more than a year until it was recognized as stage-3 melanoma. Seven years elapsed until a metastatic melanoma was found in her esophagus. Eighty percent of her stomach was removed and reconnected to her esophagus. Eight months later a metastasis was found in her left ovary. Then another tumor on the right ovary and fallopian tube. Surgery, radiation treatments and chemotherapy were all used in an effort to stop the spread of the tumors.  Despite BCG melanoma antigen therapy at UCLA and Interlukin-2 therapy at the City of Hope, tumors returned in her thigh and several other bone sites. More surgeries, radiation and chemotherapy ensued. Her course was further complicated by a new problem with seizures.  A dermoid tumor was found in her brain.  It too was treated with conventional therapy and anticonvulsant medication.

Then a simple, lifesaving change occurred. DS and her 14-year-old son moved to my town in northern California where she believed she would live out her life in a peaceful community. At the suggestion of her son, who had done research on the internet, she got her recommendation to use cannabis and began doing so daily for her pain and failing health. The melanoma metastases stopped and her health improved. She has been stable for the past 10 years with no additional conventional chemotherapy or anticonvulsant medications.  Happy and healthy, she is working as a life coach specializing in yoga and nutrition.

These cases in which the use of cannabis is associated with reduced aggressiveness of highly malignant cancers are in accord with recent findings about the body’s endocannabinoid system.  Researchers have established that activation of the CB1 and CB2 cannabinoid receptors promote cell death and reduce cell growth in many types of cancer. Cannabinoids have been shown to inhibit angiogenesis —the formation of new blood vessels required by tumors for growth. Cannabidiol (CBD), an important cannabis constituent, has been shown to potently inhibit a cancer gene and protein Id-1, a key regulator of the spread of breast cancer. CBD is the first non-toxic exogenous agent that can significantly decrease Id-1 expression in breast cancer cells leading to down-regulation of tumor aggressiveness, thus inhibiting the metastasis of aggressive human breast cancers. We also know that Id-1 has been found at higher levels in other forms of cancer.

What is extremely promising about this research is that if CBD can inhibit Id-1 in breast cancer cells, then it may also prove effective at stopping the spread of cancer cells in other forms of the disease, such as ovarian, colon, brain, melanoma, and prostate cancer where these genes and proteins are found.