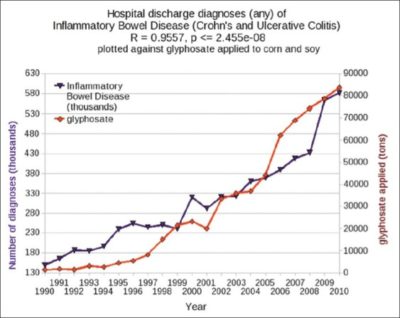 Plots of glyphosate usage on corn and soy crops (blue), and hospital discharge diagnoses of inflammatory bowel disease (Crohn’s andulcerative colitis) in the US, over time. (Figure courtesy of Dr. Nancy Swanson)

Manganese (Mn) is an often overlooked but important nutrient, required in small amounts for multiple essential functions in the body. A recent study on cows fed genetically modified Roundup®-Ready feed revealed a severe depletion of serum Mn. Glyphosate, the active ingredient in Roundup®, has also been shown to severely deplete Mn levels in plants. Here, we investigate the impact of Mn on physiology, and its association with gut dysbiosis as well as neuropathologies such as autism, Alzheimer’s disease (AD), depression, anxiety syndrome, Parkinson’s disease (PD), and prion diseases. Glutamate overexpression in the brain in association with autism, AD, and other neurological diseases can be explained by Mn deficiency. Mn superoxide dismutase protects mitochondria from oxidative damage, and mitochondrial dysfunction is a key feature of autism and Alzheimer’s. Chondroitin sulfate synthesis depends on Mn, and its deficiency leads to osteoporosis and osteomalacia. Lactobacillus, depleted in autism, depend critically on Mn for antioxidant protection. Lactobacillus probiotics can treat anxiety, which is a comorbidity of autism and chronic fatigue syndrome. Reduced gut Lactobacillus leads to overgrowth of the pathogen, Salmonella, which is resistant to glyphosate toxicity, and Mn plays a role here as well. Sperm motility depends on Mn, and this may partially explain increased rates of infertility and birth defects. We further reason that, under conditions of adequate Mn in the diet, glyphosate, through its disruption of bile acid homeostasis, ironically promotes toxic accumulation of Mn in the brainstem, leading to conditions such as PD and prion diseases.

“It seems like we live in a cesspool of chemicals,” Dr. Goldstein comments. As if to document her point, The New York Times arrived with a list —compiled by trustworthy Eric Lipton— of probably-dangerous compounds to which we, the people, are exposed by manufacturers.

In the Chemical Cesspool

The Environmental Protection Agency has published a list of 10 toxic threats it will evaluate first under a law passed last year intended to crack down on hazardous chemicals. They are among 90 chemicals identified by the agency that may harm children, damage nerve tissue, cause cancer, contaminate the environment, accumulate in the bloodstream or show up in consumer products. As the review begins, industry and other interest groups are urging the E.P.A. to limit any restrictions.

Where you may find it: Asbestos has not been manufactured in the United States since 2002, but imports surged last year, and it is still used in certain vehicle braking systems, asphalt roof coatings and gaskets. Asbestos is also commonly used by chlorine manufacturers.

How it could hurt you: Asbestos is associated with lung cancer and mesothelioma, a rare form of cancer that is found in the thin lining of the lung, heart, chest and abdomen.

Industry intervention: The trade group representing the chlorine industry, the American Chemistry Council, argues that “the few remaining uses for asbestos are tightly controlled,” and that banning it would not do much to protect health.

Where you may find it: 1-bromopropane is used as a refrigerant, a lubricant, a degreaser and a solvent in spray adhesives and dry cleaning. Its use in agricultural chemical manufacturing and foam-cushion manufacturing has also been reported.

How it could hurt you: Exposure can cause dizziness, headaches, slurred speech, confusion, muscle twitching, difficulty walking and loss of consciousness. Studies on animals suggest that exposure is also associated with reduced blood cell counts along with toxicity to the liver and the reproductive and nervous systems.

Industry intervention: The Alkylphenols & Ethoxylates Research Council, which represents companies that manufacture the chemical, arguethat the E.P.A. should not consider health threats that occur when people do not follow warning labels.

Where you may find it: Carbon tetrachloride, a clear liquid with a sweet smell, was once used in refrigeration fluids, aerosol propellants, pesticides, cleaning fluids, spot removers and degreasing agents. Most of those uses have been banned, but it is still has industrial applications, such as manufacturing petrochemicals.

How it could hurt you: It can cause injuries to the liver and kidneys and, at high levels, can result in fatal damage to the brain and nervous system.

Industry intervention: Halogenated Solvents Industry Alliance arguesthat worker exposures are already regulated by Labor Department safety rules and that “occupational conditions of use do not pose an unreasonable risk.”

Where you may find it: 1,4-dioxane is a flammable liquid with a variety of industrial applications, such as the manufacture of adhesives and sealants and other chemicals. It is used in paint strippers, dyes, greases, varnishes and waxes, and it can be found in antifreeze, aircraft de-icing fluids, deodorants, shampoos and cosmetics.

How it could hurt you: The E.P.A. says that the chemical is “likely to be carcinogenic to humans” and that it may cause kidney and liver damage. It is now often found at low levels in drinking water supplies.

Industry intervention: The American Cleaning Institute argues that while many consumer products may have small amounts of 1,4-dioxane, they are “extraordinarily low levels” and should be ignored.

Where you may find it: Cyclic aliphatic bromide cluster is a group of chemicals found in flame retardants, plastic additives and certain polystyrene foams used in the construction industry for thermal insulation boards.

How it could hurt you: People may be exposed to the chemicals from products and dust in the home. Animal test results suggest potential reproductive, developmental and neurological effects.

Industry intervention: The American Fuel & Petrochemical Manufacturers argues that the E.P.A. should not consider “potential of an accident or misuse, whether intentional or unintentional,” when deciding to restrict these chemicals, as “misuse is not even predictable and should never be included in toxicological risk assessment.”

Where you may find it: Methylene chloride is used in pharmaceutical manufacturing and polyurethane foam manufacturing. It is also found in paint strippers, adhesives, metal cleaners and aerosol solvents. Many products are sold at home improvement stores.

How it could hurt you: Exposure can harm the central nervous system, with effects including dizziness, incapacitation and, sometimes, death. It is also linked to liver toxicity, liver cancer and lung cancer. It has been associated with dozens of deaths. The E.P.A., just days before the end of the Obama administration, proposed banning its use as a paint stripper because of these hazards.

Industry intervention: W.M. Barr & Company, the largest national manufacturer of solvents, removers, fuels and cleaning products, asked the E.P.A. to withdraw its proposed rule to ban methylene chloride in paint strippers, arguing that its products do “not present an unreasonable risk.”

Where you may find it: N-Methylpyrrolidone is a solvent used in petrochemical processing. It can be found in plastics, paints, inks, enamels, electronics, industrial and consumer cleaning products and arts and crafts materials.

How it could hurt you: It may pose a particular risk to women who are pregnant or of childbearing age, according to studies on animals that suggest delayed fetal development.

Industry intervention: The NMP Manufacturers Group argues that the chemical “is used in many industry sectors, in varied processes,” and that it would be “unworkable for industry and unworkable for EPA” to evaluate them all.

Where you may find it: Perchloroethylene, also known as perc, is a solvent widely used in dry-cleaning chemicals, automotive-care products, cleaning and furniture-care products, lubricants, greases, adhesives, sealants and paints and coatings.

How it could hurt you: High-level inhalation exposure is associated with kidney dysfunction, dizziness, headache, sleepiness and unconsciousness, while long-term inhalation exposure may affect the liver, the kidneys and the immune and reproductive systems. The E.P.A. has classified it as likely to be carcinogenic to humans, as it is associated with bladder cancer, non-Hodgkin lymphoma and multiple myeloma. It is also a drinking-water contaminant.

Industry intervention: The Drycleaning and Laundry Institute and the National Cleaners Association argue that “any future decision to reduce or phase out the use of perc in drycleaning will put an oppressive burden on thousands of cleaners” and that “sadly, in taking any radical regulatory action the EPA will be doing little to reduce the negligible risks associated with the use, while threatening the future viability of thousands of dry cleaners.”

Where you may find it: Pigment Violet 29 is used in watercolors, acrylic paints, automotive paints, inks for printing and packaging, cleaning and washing agents, pharmaceuticals, solar cells, paper, sporting goods and industrial carpeting. It is also approved to be used in food packaging.

How it could hurt you: There are limited health studies, but preliminary work suggests “acute toxicity, eye irritation, skin irritation, skin sensitization,” and perhaps reproductive and developmental toxicity.

Industry intervention: Color Pigments Manufacturers Association argues that it “does not pose any known hazard in any reasonably foreseeable use or misuse, and therefore cannot present an unreasonable risk.”

Where you may find it: Trichloroethylene, also known as TCE, is used to make a refrigerant chemical and remove grease from metal parts. It is also a spotting agent for dry cleaning and can be found in consumer products. The E.P.A., in the final days of the Obama administration, proposed a ban on its use in dry-cleaning chemicals, spot removers and aerosol degreasers.

How it could hurt you: It is associated with cancers of the liver, kidneys and blood. Animal studies suggest that it may also be a factor in birth defects, testicular cancer, leukemia, lymphomas and lung tumors. TCE is also a drinking-water contaminant.

Industry intervention: The Halogenated Solvents Industry Alliance, which manufactures the chemical, argues that the E.P.A. has conducted a “very deficient risk assessment.” Pointing to one study the E.P.A. has used, the group says that “a single flawed study should not be the basis for the toxicological value that serves as the basis for regulation.

The ability of weeds to adapt to Round-Up is driving the resurgence of paraquat sales. The manufacturers are citing “genetic factors” as causative in Parkinson’s, as if genetics and exposure to toxins were an either/or instead of a synergistic relationship.