Tashkin on Cannabis and COPD 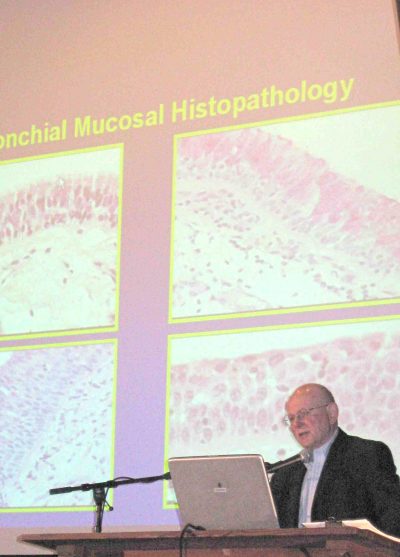 Donald Tashkin, MD, addressing Patients out of Time at Asilomar.

At the 2008 Patients Out of Time meeting at Asilomar, much of Dr. Donald Tashkin’s talk was devoted to Chronic Obstructive Pulmonary Disease.

Chronic bronchitis and emphysema are two forms of COPD, which is the fourth-leading cause of death in the United States. Air pollution and tobacco smoke are known culprits. Inhaled pathogens cause an inflammatory response, resulting in diminished lung function. COPD patients have increasing difficulty clearing the airways as they get older.

Tashkin and colleagues at UCLA conducted a major study in which they measured lung function of various cohorts over eight years and found that tobacco-only smokers had an accelerated rate of decline, but marijuana smokers –even if they smoked tobacco as well– experienced the same rate of decline as non-smokers.

Tashkin concluded that his and other studies “do not support the concept that regular smoking of marijuana leads to COPD.”