A new paper by Ujvary and Hanus reviews what has been published about the metabolites of cannabidiol. CBD itself scarcely becomes bioavailable after its passage through the liver. It breaks down into derivatives about which surprisingly little is known.

Ujvary, a Hungarian chemist, notes that “Cannabidiol has been around since the 1940s, and has been tested in the lab and in the clinic as a treatment for various diseases. One of the important things in developing an effective medicine is to look into the mechanism of action and pharmacokinetics and metabolites. Whenever a new synthetic drug is found to have some activity, the first thing you do is look into how it is metabolized, how other drugs influence its metabolism, and how the drug influences the metabolism of other drugs.” He assumes that GW Pharmaceuticals is studying CBD’s metabolites —it is a stated objective of their clinical trials— but “they wouldn’t disclose any research results at this point.”

“Part of the CBDA molecule (and THCA, the genuine biosynthetic products of the plant), resembles salicylic acid —”the OH and the COOH next to each other”— which Ujvary suspects might contribute to the anti-inflammatory effect exerted by the unheated plant preparation.  (Salicylic acid joined to an acetyl group is the basis for aspirin. Salicylic acid is found in willow.)

A graphic from a study reviewed by the authors shows the chemical structures of the major metabolites detected in the urine of one patient, and lists their relative amounts.

• A recent patent described 7-OH- and 7-COOH-CBD as anti-inflammatory substances in the mouse and as dose-dependent inhibitors in vitro of the generations of nitric oxide and reactive oxygen species as well as the production of TNF-α.77 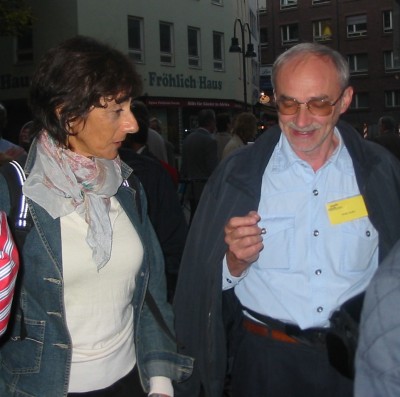 l motility (defecation). Interestingly, unnatural (+)-CBD and its 7-OH and 7-COOH derivatives potently inhibited defecation indicating peripheral activity perhaps through a CB receptor-independent mechanism; furthermore, weak antinociceptive effects for 7-OH-(+)-CBD were also noted.73,77As mentioned before, antinociceptive as well as anti-inflammatory effects in mice of 7-OH-CBD and 7-COOH-CBD have been described in a patent but these experiments used chemicals as noxious stimuli.77

•  In general, the most abundant metabolites are hydroxylated 7-COOH derivatives of CBD (Fig. 2) that are excreted either intact or as glucuronide conjugates. The route of administration affects the pharmacokinetics of CBD and high intra- and intersubject variability is common in humans.

• In five individuals each smoking a single cigarette containing ∼19 mg [2H]CBD, the average peak blood plasma level of CBD was 110 ng/mL recorded at 3 min postdose; it was undetectable after about 60 hours.

• Interesting results were obtained from experiments in which capsules filled with either unheated or heated cannabis extracts containing 10 mg THCtotal (THC+THCA) and 10–15 mg CBDtotal(CBD+CBDA) estimated when fresh: pharmacokinetic analysis of the blood of patients ingesting two such capsules showed mean peak plasma CBD concentrations four times higher in the unheated extract than in the heat-treated extract.  The results suggest that the use of unheated cannabis extract rich in acidic phytocannabinoids may beneficially affect the uptake and metabolism of CBD or other phytocannabinoids.

CBD was neither helpful nor harmful  for Huntington’s patients in the paper cited by Ujvary and Hanus.

• As a part of a series of trials with “Cannabis Based Medicine Extracts” such as Sativex®, the pharmacokinetics of a total dose of 20 mg CBD in sublingual drops was studied in six healthy subjects.40 In a representative experiment, the mean of the peak plasma concentration of CBD was 2 ng/mL at 130 min postdose. Similar values were obtained for a mixture of 20 mg THC+20 mg CBD applied either in sublingual drops or as aerosol; when applied through a nebulizer (10 mg THC+10 mg CBD), however, the peak plasma level was 9.5 ng/mL at 36 min after administration and the half-life of CBD in plasma was 66 min.

• The human skin permeation of CBD solutions was investigated in vitro and CBD concentrations as high as 6.1 mg per gram skin preparation could be achieved under certain experimental conditions.  Various CBD formulations for transdermal and intranasal delivery have also been studied in rodent models.

• Being a good substrate of CYP450 mixed function oxidases, CBD undergoes extensive hydroxylation at multiple sites and further oxidations result in a complex metabolic pattern; altogether, some 100 CBD metabolites have been identified from various organisms.26 In general, the major metabolites of CBD were derivatives of CBD-7-oic acid (7-COOH-CBD) further oxidized at the side chain (Fig. 2a, b).

• Following initial excretion studies,32,58 about 40 oxygenated human Phase I metabolites have been characterized.

• Δ2(E)-Valproate is the major active metabolite of valproic acid, and unlike the parent saturated acid, its anticonvulsant properties are not compromised by hepatotoxicity and teratogenicity, and is well tolerated in humans.61 Whether the 7-COOH-CBD metabolite species with a Δ2(E)-valproate-like structure are involved in the antiepileptic activity of CBD remains to be established

Valproic acid may be “well tolerated” by some humans, but according to the Epilepsy Foundation the “most common complaints (usually not too severe) are: tiredness (sometimes with slower thinking), dizziness, upset stomach, vomiting, tremor, hair loss, weight gain.”

• The enzymatic processes responsible for the formation of the metabolites involve CYP450 oxidases, glucuronyl transferases and sulfotransferases, of which the CYP450 enzyme family has only been thoroughly studied.

•  interindividual differences in the expression and function of CYP450 enzymes may considerably affect the pharmacokinetics of CBD and its metabolites, and this could be relevant in the therapeutic action and any possible adverse effects of CBD-containing preparations. For CBD, essentially no relevant information is available and we are aware only of one publication that deals with the genetic polymorphisms in CYP2C9 and CYP3A5 as related to THC metabolism in humans.

• CB receptor binding studies72–74 with CBD enantiomers and their derivatives revealed that (−)-CBD (natural enantiomer) and its 7-OH and 7-COOH metabolites were devoid of receptor affinity (Ki > 10,000 nM); however, synthetic (+)-CBD was a modest receptor ligand

• Upon i.v. administration to rabbits, CBD (1 mg per animal) had no activity in lowering intraocular pressure but 10-OH-CBD (2 mg per animal) was effective with a slow onset of action; nevertheless, THC was more potent at the 1 mg dose in the study.85

• There are no publications describing the biological activity of CBD metabolites in humans.

• Already in 1942, it was noted by Adams91 that “cannabidiol, which is devoid of the marihuana effect upon man, showed the highest potency in this [mouse sleep prolongation] test” (that is extending the hypnotic effects of certain barbiturates); such a synergism was later shown to be related to the inhibition by CBD of mouse hepatic microsomal metabolism as demonstrated for phenazone (antipyrine).92 In young men with marijuana use experience, however, CBD at the low acute smoked dose of 0.5 mg/kg failed to affect the plasma level of secobarbital.93 Yet, a subsequent human pharmacokinetics study found that upon oral administration in a 6×100 mg daily dose regimen, CBD significantly increased the bioavailability and prolonged the elimination half-time of hexobarbital.94 It has also been proposed that the o 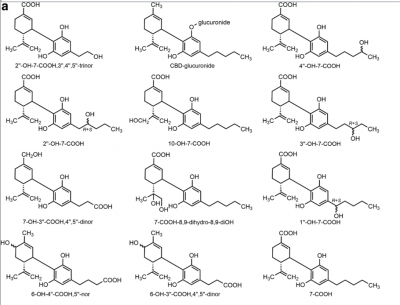 bserved interference with drug metabolism in vivo could be due to one or more metabolites and not to the parent CB.55

• It has repeatedly been demonstrated that CBD is not only a substrate but also an inhibitor of CYP450 enzymes, and thus, it could interfere with the metabolism of other xenobiotics, including THC and medicinal products.27,34,76,90,95Moreover, prolonged CBD administration may induce specific CYP450 isoenzymes,  as it has been shown in mouse liver CYP3A and CYP2B1096 as well as for human CYP1A1 in vitro.97 Also, 6α-OH-CBD, but not 6-oxo-CBD, was found to be an effective inducer of CYP2B10.96 The resorcinol moiety apparently plays a pivotal role in CYP450 induction.

• During a Phase I study with healthy male subjects, potential drug–drug interactions of THC/CBD oromucosal spray (Sativex, nabiximols) in combination of CYP450 inducers and inhibitors were assessed using various dose regimens.99The antibiotic rifampicin, an inducer of CYP3A4 involved in the metabolism of CBD, significantly reduced the peak plasma concentration of CBD, while the antifungal ketoconazole, a CYP3A4 inhibitor, nearly doubled the peak plasma concentration of CBD; however, the moderate CYP2C19 inhibitor omeprazole, a proton-pump inhibitor used to treat gastroesophageal reflux disease, did not significantly alter the pharmacokinetics of CBD. The presence and role of CBD metabolites in the observed drug interactions have not been reported.

Several drugs used in therapy are metabolically converted into active metabolites and interindividual variations in the generation and pharmacokinetics of such active species may cause variability in the response to treatment by different individuals.126 The use of relatively high daily doses of CBD in human clinical trials as well as in self-medicating patients is not uncommon. For example, in a 30-day CBD monotherapy study, an escalating oral dose reaching 1280 mg/day was administered.127 Although information is lacking, the metabolites formed from CBD are assumed to be present in the body at pharmacologically relevant concentrations. Pharmacological studies with such metabolites are scarce yet suggest interesting biological activities, which are unrelated or not directly related to CB receptors. Thus, intriguing questions arise:

Could any of the pharmacological effects observed for CBD be attributed to its metabolites?

Are there any drug–drug interactions that affect the outcome of the therapeutic effects of other, non-CB medicines used concomitantly with CBD?

Could any of the metabolites be used as templates for the development of novel therapeutic agents?

The pharmacological characterization of CBD metabolites both in vitro and in vivo is timely and necessary to shed light on the multifaceted, perplexing, or sometimes even contradictory biological properties observed for the parent CB. The understanding of the clinical significance of these abundant metabolites in the proven therapeutic effects of CBD-containing preparations warrants further studies.