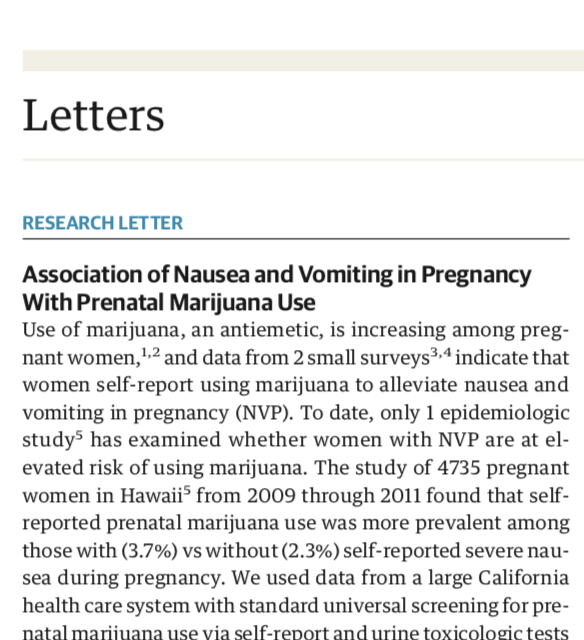 Association of Nausea and Vomiting in Pregnancy with Prenatal Marijuana Use was published by JAMA online as a research letter August 20. The authors are with Kaiser Permanente’s Northern California Division of Research.  In response to more pregnant women using cannabis as an antiemetic,  Kaiser records were analyzed to find a correlation between marijuana use and nausea and vomiting during pregnancy (NVP, also known as “morning sickness”). They found, unsurprisingly, that the more severe her nausea, the more likely it is that a woman will use marijuana.

The authors conclude with a bow to the “national guidelines” promoting abstinence. They go so far as to recommend drug-testing for the mothers-to-be!

“The health effects of prenatal marijuana use are unclear, and national guidelines recommend that pregnant women discontinue use. Patients with NVP should be screened for marijuana use and educated about effective and safe NVP treatments.”

Steve Robinson, MD,  forwarded the JAMA item with the observation:

KAISER is sitting on LOTS of data already that could be used to evaluate the longer term consequences of cannabis use in pregnancy. In the current letter, they’ve already identified over 11,000 women who used cannabis while pregnant, 2009 – 2016. They COULD, if so inclined, do a follow-up on the children of those mothers to determine if there were any obvious impacts on the children.

I’m sure if there was harm we would already know about it.

Why Kaiser hasn’t mined their treasure trove of data is a mystery. Research director Steve Sidney, MD,  is no Drug Warrior. We reported on his published-but-unpublicized cancer study in the first O’Shaughnessy’s:

It was the paper by Sidney et al based on Kaiser data showing that marijuana smoking does not cause lung cancer and increased mortality that Tashkin et al were trying to refute but instead confirmed in 2005.

Prior to Tashkin’s finding, lung cancer was the main harm attributed to marijuana use by the prohibitionist experts. Since Tashkin they have seguéed to harm to the developing brain (teens and young adults), harm to the fetus and baby (mothers), and Cannabis Use Disorder (everybody).

Consider the ramifications of medical guidelines that promote abstinence during pregnancy and lactation.  “National guidelines” by the Ob-Gyn establishment give Child Protective Services the basis taking babies from pot-smoking moms! The worst harms allegedly caused to a baby by a pot-using mom are infinitesimal compared to the harm of separating them.  The Nanny State ripping a babe from a mother’s breast is like an image out of Blake. But it’s not an image, it’s a real tragedy happening  every day, everywhere in the land of the tree. 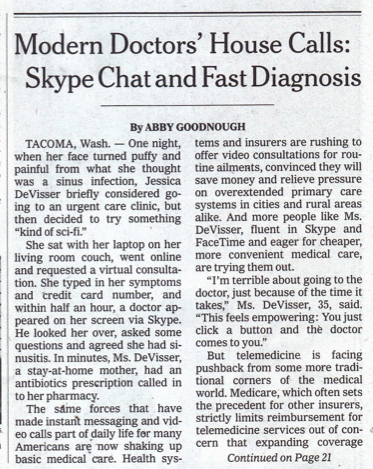