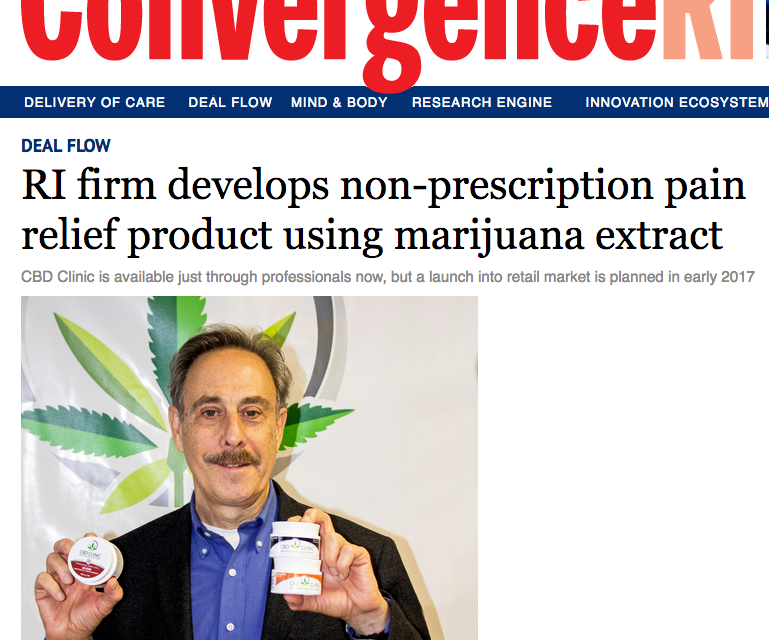 A Rhode Island physician forwards this piece by Richard Asinof from a website called ConvergenceRI:

… Threading the needle of regulation, a local Rhode Island company has developed a new product line for non-prescription chronic pain relief, called CBD Clinic, available in both an ointment and a cream, that utilizes the extract of cannabidiol in its formulation, produced in partnership with Charlotte’s Web in Colorado.

The initial market response to the new product line has “exceeded our expectations,” David Goldsmith, the firm’s top executive, in a recent interview with ConvergenceRI.

Aidance Scientific, which was founded in 2004, develops and manufactures an extensive line of mostly all-natural, non-prescription dermatology products in its Rhode Island FDA-registered facility.

Aidance products are distributed globally and are available at CVS, Walgreens, and other major retailers, according to Goldsmith.

In its formulation of CBD Clinic, Goldsmith said that the company had embarked on a very different regulatory strategy than the hundreds of companies developing medical marijuana products containing THC, the psychoactive substance in marijuana that gets you high.

Instead, the product line was developed using pure cannabidiol oil extracted from the plant that is nearly devoid of THC, seeking to provide an entirely new class of non-prescription topical medications to capture a share of the $3 billion topical analgesics marketing, according to Goldsmith.

The firm’s mission to help people throughout the world be as pain-free as possible and have easy access to a cannabis-infused product that, as its branding slogan claims, “Doesn’t get you high. Just better.”

Here is the ConvergenceRI interview with David Goldsmith, whose company has launched an innovative non-prescription product line to address chronic pain relief using an extract of the hemp plant.

ConvergenceRI: How has the launch of the new product line been going?
GOLDSMITH: We have exceeded out own expectations. And our own expectations are high. We’ve worked hard, and it’s nice to have an early success.

ConvergenceRI: Is CBD Clinic a cream?
GOLDSMITH: It’s available in both creams and ointments. The cream is water-based; the ointment is oil-based.

ConvergenceRI: How is the product being made available?
GOLDSMITH: We have a professional series product line we began distributing to health and wellness professionals a few months ago that is available, through doctors’ offices, across the country.

Currently, we have placed it in about 20 states through several hundred professionals.

ConvergenceRI: Is it currently available as a non-prescription product over the counter? Is it available here in Rhode Island?
GOLDSMITH: We started distribution in Colorado, Texas and Florida. We’re just in the beta test phase, in a way. We are just now really rolling it out to distributors. There are no local distributors yet.

ConvergenceRI: Is it available for local practitioners, if they request it?
GOLDSMITH: Absolutely.

ConvergenceRI: But it is not yet available in any local drug stores?
GOLDSMITH: That’s correct. There are two different kinds of products: one is a professional series, which is slightly different than the retail series.

The retail series has not yet been launched. We are planning a crowd funding, pre-campaign in the next few weeks, with a launch in the next couple of months in retail stores, sometime in the first or second quarter of 2017.

ConvergenceRI: How much does it cost?
GOLDSMITH: The professional series runs from $25 to $90 [a jar]. The products have varying concentrations of CBD [cannabidiol].

The extracted CBD oil is higher than the price of gold. It sells for about $1,700 an ounce.

The $90 jar has the highest concentration of ingredients allowed by the FDA. The $90 jar is our hottest seller. We cannot keep it in stock.

Chiropractors are ordering two- to three- to four-dozen of the $90 jar. They buy it at wholesale and resell it. They are using it in their practices and have seen really great results with [treatment of] chronic pain.

With professional athletes and Olympic athletes, they are reporting really, really good results. One athlete reported that they haven’t had the freedom of movement for quite some time after using CBD Clinic, as well as reduction of their pain.

This is the first product that incorporates an extract from cannabis that has almost no THC.

ConvergenceRI: Can you share market projections in terms of sales?
GOLDSMITH: We’re still getting off the ground, but we have very high expectations. It’s a start up. It will take a while. We are in discussions with some very large distributors right now.

Next year, when we launch a crowd funding campaign around the retail series, we hope to do very well with that, we expect that the products are really going to take off.

What we’re finding in our conversations, across the board, is that people accept on faith [the potential value of the product], given so much work that has been done on medical marijuana.

There have been many stories about the efficacy of CBD, including the three CNN documentaries by Dr. Sanjay Gupta, and the little girl that had literally 100 or more seizures a day, and how CBD, delivered in a tincture, dramatically reduced her seizures.

We cannot and do not make any medical claims about our product. CBD is not an approved drug; it is listed as an inactive ingredient.

As formulators, we can say that we have formulated a strongly superior product, based on its active ingredients that help to make it a really effective product.

ConvergenceRI: What has been the response? Can you share some stories?
GOLDSMITH: We were at our first trade show in Texas. Texas is a relatively conservative state. In fact, the governor had come out very strongly about medical marijuana. We didn’t know if there would be a lot of pushback.

The doctors totally embraced the potential for [our product]. They were aware of the research globally. We ended up being swamped by the demand at the trade show.

We began hearing stories, like the one from a chiropractor in Tennessee. His wife is his office manager, who had some problems with her shoulder.

“David, I have to work on that shoulder everyday, I’ve had to do it for years. She put on your ointment using a sample from the [trade] show, and every day since then. David, I haven’t had to touch her shoulder since the show.”

We hear stories like this all the time. There is a physician in Los Angeles, whose patient is a celebrity chef, and she forwarded an email from the chef, talking about the substantial reduction in pain after using our product for a week or so.

We do know that we’ve created an extraordinarily effective product. Professional athletes, such as Jake Plummer, the former quarterback with the Denver Broncos, have praised CBD Clinic. Plummer said: “It goes to the source of pain and takes it away, allowing me to have freedom of movement and to live an active lifestyle.”

ConvergenceRI: How have you financed the CBD Clinic?
GOLDSMITH: We raised our own capital, about $500,000. We spun off from Aidance, and we quickly raised the money we needed to get the company off the ground. It was all private money, from friends.

ConvergenceRI: How do you plan to advertise the product?
GOLDSMITH: It will be a combination of things. We are reaching out to bloggers, in specialty areas such as lupus, as well as other areas with chronic pain.

We will be doing a lot of digital media promotion. We’re also advertising in chiropractic magazines, and we will be expanding that to physical therapy journals and family physician magazines.

ConvergenceRI: How is the CBD extract produced?
GOLDSMITH: We have a partnership with Charlotte’s Web in Colorado to produce the CBD extract. It is the best and purest oil you can buy in the world, and the only one that we’re aware of that is controlled from seed to oil.

They grow their own, right from the seed, in ground that has never seen industrial anything. They control the entire process, from growing it to extracting it. It’s the highest quality CBD available anywhere, and we’re fortunate to have them as an exclusive, strategic partner.

We’re the only company that will be using their extracted CBD oil in topical medications.

Here is the piece as it ran in ConvergenceRI. We like the juxtaposition on their navigation bar of “Deal Flow” and “Mind & Body.”  Convergence, indeed. 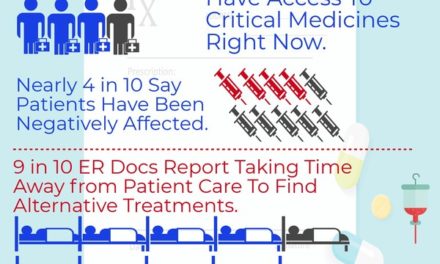