The corporate media defames the medical marijuana movement with pseudo-exposés of doctors who readily issue approvals to anybody who claims to have used marijuana beneficially. “Potdoc” is used as a pejorative —a put-down.

To date the media has not done a single feature story on the Society of Cannabis Clinicians —serious doctors who have developed an understanding of the effects of the active compounds in Cannabis, their mechanism of action, delivery systems, proper dosage, and so forth.

Nor does the media point out that all cannabis consultants —both the serious specialists and the profit-seeking “potdocs”— fill a niche created by the medical establishment and law enforcement.

People usually go to cannabis consultants because they’re embarrassed or afraid to ask their regular doctor for a letter of approval —and with good reason.

Many doctors are unwilling to approve cannabis use because they learned nothing about it in medical school and can’t knowledgably discuss dosage, possible side-effects, etc.. They are justifiably modest.

Many more are afraid of jeopardizing their licenses.

Drug Czar Barry McCaffrey and Attorney General Janet Reno threatened to revoke the license of any doctor who approved cannabis use when Prop 215 passed in ‘96.

A federal judge would rule that doctors and patients have the right to discuss all treatment options under the First Amendment; but the well-publicized threat has had a long-lasting chilling effect.

In addition to the appropriately modest and the sincerely frightened, there is a large set of doctors who truly believe in The System. To the true believers, the designation of cannabis on Schedule I by the Attorney General means that it really is a dangerous drug with no medical benefit, and anyone seeking to obtain a Schedule I drug really is a criminal, and criminals really should be punished because the threat of punishment is what holds The System together.

At least the “potdocs” understand that the medication they’re approving is safe. 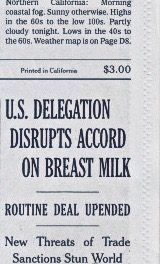