The Senate Caucus on International Narcotics Control was created in 1985 (the height of the Ronald Reagan era) and given special powers to issue subpoenas and call hearings. Chairman Chuck Grassley (Republican, Iowa), arranged for a hearing June 24, 2015 on “Barriers to Cannabidiol Research and Potential Medical Benefits.”

After opening statements by Grassley and his Democratic counterpart, Dianne Feinstein of California, three Senators who have introduced CBD-related bills —Orrin Hatch, Kirsten Gillibrand, and Cory Booker laid out their views. Then came testimony by Joe Rannazzasi of the DEA, Dr. Douglas Throckmorton a deputy director at FDA, and Dr. Nora Volkow, the director of NIDA. Booker and Gillibrand joined Grassley and Feinstein in questioning the agency officials.

Grassley recounted the basic story —kids with epilepsy getting seizure relief from “a substance called cannabidiol, or CBD… a compound derived from the marijuana plant that can be administered in the form of an oil. It’s not smoked, and it can’t be used to get high.”

Desperate parents are “buying CBD products that haven’t undergone the usual testing for safety and efficacy associated with new medicines, and in many cases haven’t been evaluated for concentration or purity. Sometimes these products may be helping children, but sometimes they have no effect, or may even cause harm.”

Grassley described GW Pharmaceuticals’ Epidiolex, which is “undergoing FDA-approved clinical trials to treat two rare forms of pediatric epilepsy. I’m glad that one of the sites at which it’s being tested is the University of Iowa.” Read more in O’Shaughnessy’s “Senate Drug Caucus on CBD.” 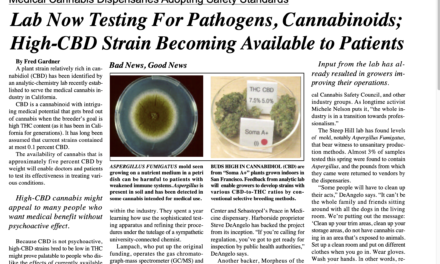