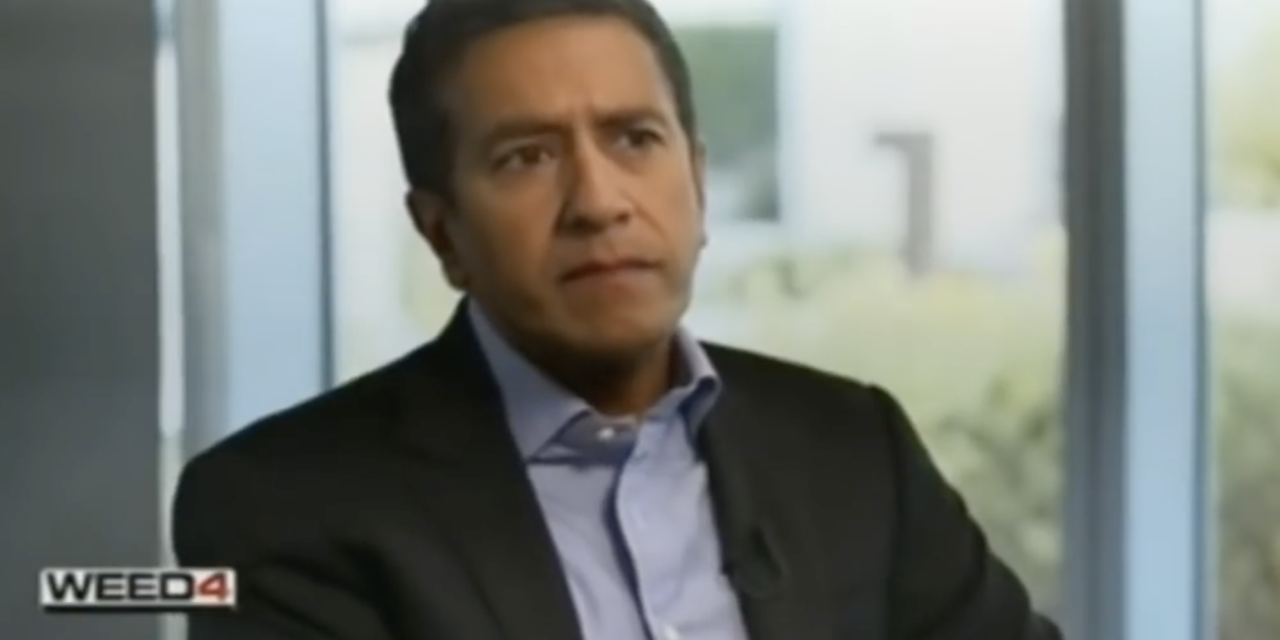 April 27. On Sunday night CNN presented Dr. Sanjay Gupta’s Weed 4: ‘Pot vs. Pills,’ which documented from many angles the reality that using cannabis can enable chronic pain patients to cut back or eliminate their dependence on opioids.

The show began with Monday Night Football footage of the play on which running back Mike James’s ankle was broken. After surgery James was put on opioids. He had no misgivings because the pills were prescribed by a doctor. He soon became addicted. He nixed suggestions that he try marijuana because it was illegal and he associated it with “the street.” Even after he tried it once and achieved pain relief, he was afraid to use it again because he had no reliable source.  “The pills were easier to get,” he told Gupta. Finally. for the sake of his wife and children, and with the help of Kyle Turley, a retired NFL tackle who is a leading proponent of medical marijuana, James changed his regimen and was able to substitute cannabis for opioids. He failed an NFL drug test, of course, and was remanded to the league’s substance abuse program. James then took the unprecedented step of requesting a Therapeutic Use Exemption from the league’s ban on marijuana use. Gupta told his viewers that the league had responded and more would be revealed by the end of the 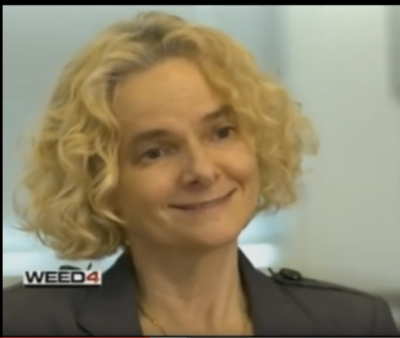 Mark Wallace is the director of the center for pain medicine at UC San Diego. “We were told in medical school that the use of opioids was probably not that risky, and that we should use them more liberally,” he tells Gupta. (Wallace graduated from  Creighton University Medical School in 1987.)
Cut to a 1998 TV ad from Purdue Pharma in which a physician delivers the same message to prospective patients.
Cut to the office of Nora Volkow, director of the National Institute on Drug Abuse, who traces the current epidemic to patients becoming addicted to prescribed opioids. Gupta makes a statement in a questioning tone: “We knew that there was a danger. We knew that they weren’t effective after a period of time, and yet it still happened anyway.”  Volkow has been nodding her head with a knowing smile: “Marketing,” she responds.Gupta doesn’t follow-up —at least on video— by asking her to name the manufacturers who were doing the marketing. Purdue is the company that has gotten all the blame, public-relations-wise.  Johnson & Johnson and Abbott Labs —both major producers and promoters of semi-synthetic opioids starting in the late 1990s— are never mentioned. As the epidemic escalated, J&J quietly sold off their vast poppy fields in Tasmania. Their marketing department undoubtedly has specialists in the scrubbing of history.

Wallace had made the point that doctors didn’t have good alternatives to opioids for treating pain. After footage of newscasters announcing the victory of Prop 215 (the 1996 ballot initiative by which California voters legalized marijuana for medical use), Wallace makes an interesting comment to Gupta, “When it was legalized, I didn’t jump on the bandwagon and

There was no bandwagon. In fact, there was only one California doctor proclaiming his willingness to approve cannabis use for any condition for which it provided relief: Tod Mikuriya, MD.  In the years ahead, more doctors followed Mikuriya’s example, and in 2000 he launched the group now known as the Society of Cannabis Clinicians. There were 10 members, nine of whom would be investigated by the Medical Board of California based on complaints by law enforcement (not by patients). All were promptly cleared, except for Mikuriya himself, who was put on probation and fined —sanctions he fought to the end.

Wallace told Gupta he had been waiting for “evidence” that treating pain with cannabis would not lead to problems the way prescribing opioids had.  There’s a great segue, as Gupta says, “But there was history” and we see a shelf full of beautiful old pharmacy bottles containing cannabis extracts. “Before marijuana was banned in the 1970s,” Gupta explains, “it was used for more than a century as a treatment for many disorders.”

In 1999, Gupta recounts, the California legislature funded the Center for Medicinal Cannabis Research at UC San Diego “and within a decade there were six studies,” one conducted by Dr. Wallace, showing that cannabis was a safe and effective treatment for various types of pain. This was the evidence Wallace was waiting for. The results “made the cautious doctor more comfortable” about recommending cananbis, and today, Gupta tells us, 80% of Wallace’s patients have been “weaned off pills using pot.”

Gupta visits one of these fortunate patients, a totally believable middle-aged man who has used cannabis to end 10-years of  ineffective Percocet, Oxycontin,  Fentanyl et al.

There is a brief tour of a Las Vegas company called Shango, where Kyle Turley gets his medicine. (The company may be using Turley as a blocking guard.) The camera panned workers wearing hats, masks, gloves and lab coats as they trimmed buds from Shango’s vast fluorescent grow site. This is a plant that thrives in the sunlight! Made legal by reformers supposedly worried about climate change.
Turley’s preference for CBD is our segue to cannabidiol, the non-impairing cousin of THC shown to reduce Charlotte Figi’s epileptic seizures on Gupta’s first Weed Special.  We are reminded that CBD not only cuts off pain signals to the brain (as do opioids), but it also reduces inflammation, which is a cause of pain. Gupta adds:
“It’s ironic that cannabis can do more than opioids yet prescription opioids are legal and cannabis is not. Historically, that was not the case. For centuries, both cannabis and poppies —two plants, the natural forms of marijuana and opioids—  were commonly prescribed by doctors and dispensed at pharmacies. But that all changed in the 1930s. Opioids would go on to  become a best-selling drug and cannabis became increasingly fringe…”
[Actually, the change began in 1914 with the passage of the Harrison Act. The two drugs’ paths diverged sharply in the 1930s when federal marijuana prohibition arrived in the form of a tax act passed by Congress. Harry Anslinger, the head of the Federal Bureau of Narcotics, controlled the issuing of opium-import licenses to the pharmaceutical companies —opium was the key source of his political power. But I digress.]
Gupta notes that “One kind of cannabis, called hemp, was a threat to big business. Hemp was a cheap fiber, good for making paper and canvas, more absorbent than cotton, and could be used as a potential fuel.”
NYU Professor Julie Holland confirms, “There were a lot of vested interests that put cannabis down —took it away from the doctors, made it illegal. “

After a commercial break, over music, Gupta narrates: “A beautiful flower that looks harmless enough, but the opioids derived from this plant can turn people into addicts.” The plant on the screen looks harmless because it is harmless — the common field poppy (Papaver rhoeus), whose opioid level is minuscule.

Addicts are the subjects of Dr. Yasmin Hurd’s research. She is the director of the NYU School of Medicine Addiction  She explains to Gupta that opioids destroy glutamate receptors in the prefrontal cortex of the brain. (It’s cute the way he, a neurosurgeon, pretends he doesn’t know.) Recovery programs that require total abstinence have a success rate of only five to 10 percent, says Hurd. She acknowledges that “Medication Assisted Treatment” —whereby Methadone or Subaxone are prescribed— can help about 50% of patients stay off stronger opioids.  But the physiological craving for opioids goes untreated. She  has been looking at CBD to not only treat the underlying pain but to normalize glutamate levels, which would enable the brain to normalize.

Stacey Gruber, whose brain scans once showed harm inflicted by cannabis use, is now seeing benefit! She did a study in which opioid users given access to cannabis for the first time reduced their opioid use by 47%. Gruber’s scans showed that the subjects’ brains changed “when off of pills and on pot. The brain’s white matter, which is what allows us to communicate between regions became better organized. Gruber found her finding “very exciting.”

Prozac (Checking out the Lifeboat)