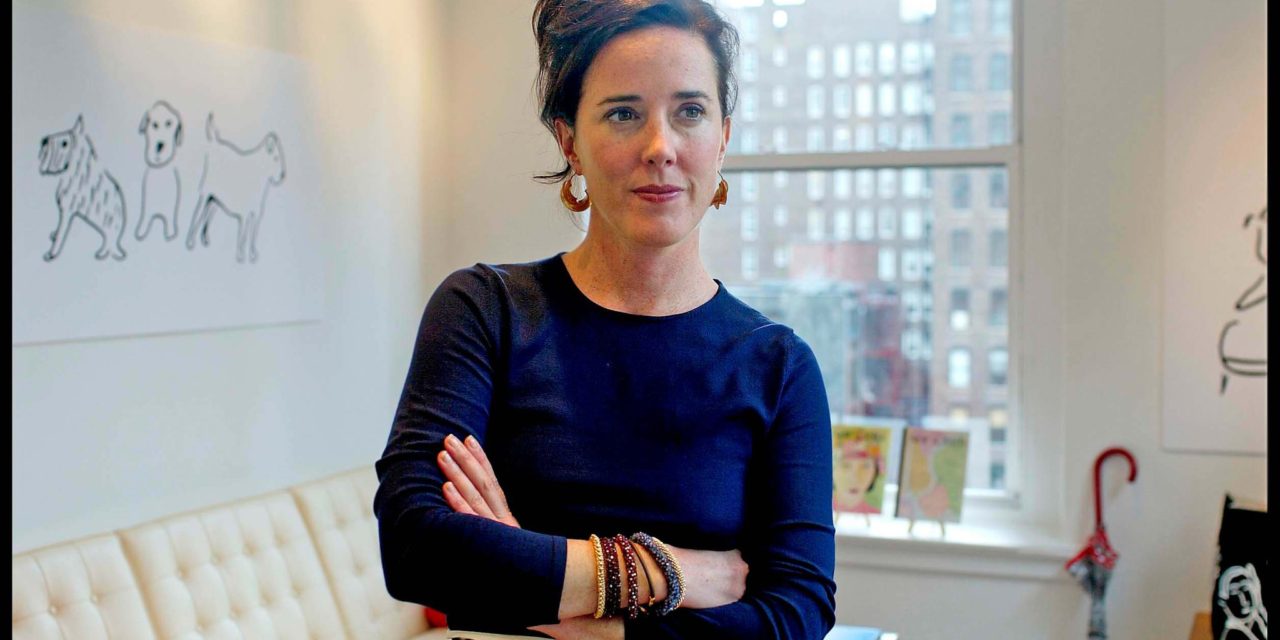 The suicide of an admired, accomplished, creative person stings, stirring us to explain why. The common underlying disease is usually depression, and today sadly only about 50 percent of those afflicted enter treatment.

The common psychological state is best described as an inextinguishable anguish and pain that seem never-ending. Suicide is not a cop-out, nor giving up, but rather an attempt to stop the unbearable pain. For those nearing that state or observing another in that extreme pain, reaching out can be lifesaving.

Retro Message:  Jacobs’ letter was duplicitous because Kate Spade had in fact been getting “treatment.” Her  estranged husband, Andy Spade (brother of actor David Spade, BTW), issued this statement:

“Kate suffered from depression and anxiety for many years. She was actively seeking help and working closely with her doctors to treat her disease, one that takes far too many lives… It clearly wasn’t her. There were personal demons she was battling.”

Doug Jacobs crossed our radar in the 1990s when we were researching the marketing of Prozac.  This is what Alex Cockburn and I wrote about him:

In January 1995 Eli Lilly, the Indianapolis-based drug company that derives more than 25% of its profits from the sale of Prozac, suffered a minor p.r. setback. The Washington Post reported, in response to complaints by parents, that two Lilly sales reps had addressed the student body at Walter Johnson High School in Bethesda Maryland on National Depression Screening Day (Oct. 6, 1994), passing out free Prozac pens and Post-it pads, and proselytizing at two assemblies on the subject of “clinical depression.”

A follow-up Post story Jan 27 reflected Lilly’s attempt at damage control: “The maker of Prozac, the world’s most widely prescribed antidepressant, said it no longer will allow its drug salesmen to attend company-funded community programs that are intended to educate people about depression and identify individuals who may need help… Eli Lilly spokesman Ed West said that the sales representatives violated company policy, which at the time allowed salesmen to perform only clerical or administrative duties, such as putting up balloons, to support depression awareness programs… West said what occurred at Walter Johnson ‘was an isolated event,’ but, to avoid such mistakes in the future, the company would tighten its policy by banning on-site visits by Eli Lilly officials.”

Ed West is a deft p.r. man, and his response made it seem as though the problem at Walter Johnson H.S. was one of some enthusiastic sales reps overstepping the line between educating and selling. But what if the protocols of National Depression Screening Day had been followed to the letter, and the talks had been given by mental health professionals –what business does Eli Lilly have pushing drugs in our high schools directly or indirectly? In 1994 some 85,000 Americans took part in National Depression Screening Day at some 2,000 sites. Public service announcements promoting this event on radio and television carried Lilly’s message to millions more.

We attended a presumably typical session at St. Mary’s Hospital in San Francisco. It consisted of two psychiatrists giving a tag-team lecture on depression while the marketing director of the hospital’s neuropsychiatric institute showed slides restating the main points. Which were: Depression is a medical illness. It is treatable by psychotherapy, medication, or a combination of both. One in five American adults will suffer from this medical condition during their lifetime —twice as many women as men. There should be no stigma attached to seeing your doctor to get help for this widespread but treatable medical condition. And, as Dr. F. put it, “Antidepressants are not stimulants, not addictive, they make you normal.”

The psychiatrists’ basic material was taken from a manual written and provided by Douglas Jacobs, MD, clinical professor of psychiatry at Harvard Medical School and founder and prime organizer of National Depression Screening Day. Dr. F. mentioned Prozac by name and called it “a wonder drug in several senses.” He claimed that people lose weight on it because it restores the sense of taste, thereby eliminating the patient’s interest in junk food. (Lilly may have gotten more than they bargained for when Dr. F was hired to give the pitch. In response to a question he mentioned that two of his own children are on Prozac.)

“It’s very unlikely that Prozac will turn out to have side-effects we don’t know about,” according to Dr. F. He said that when a patient tells him that Prozac has lost its effectiveness, “the choice is to increase the dosage or switch them to Zoloft” (a similar antidepressant manufactured by Pfizer’s Roerig unit). The loss of effectiveness isn’t a matter of tolerance building up, Dr. F asserted without offering an alternative explanation.

“The treatment is really simple,” he breezily concluded. “You take one pill a day for two or three weeks. If it doesn’t work, nothing lost.” The marketing director then showed a video called Moving into the Light —an infomercial produced by the National Mental Health Association with money provided by Eli Lilly– that opens with a series of clinical-depression vignettes. A secretary grumbles about her work not being enjoyable, a man opines that life is “meaningless,” a truck driver complains of a backache, etc. Eventually a narrator (sounding very much like Phil Hartman) intones, “Let us now turn to a noted medical authority, Dr. Peter E. Stokes, who has treated thousands of people successfully for clinical depression.”

Cut to a bald man in a white coat who takes off his glasses and leans into the camera, saying, “Many people do not understand the medical nature of this illness, clinical depression…” National Depression Screening Day is one small element in a pervasive campaign by the pharmaceutical manufacturers —with Eli Lilly in the vanguard— to convince the American people that there is a medical illness called “clinical depression” that results from a chemical imbalance in the brain and that is treatable by drugs.

The campaign is endorsed by the psychiatric establishment and the federal government. Its goals include:

• convincing employers and the government that widespread use of antidepressants will boost productivity.

• discrediting critics by linking them to a “cult.”

• keeping the American people convinced that the spreading mass misery is just so many individual cases of “chemical imbalance,” correctable by drugs.