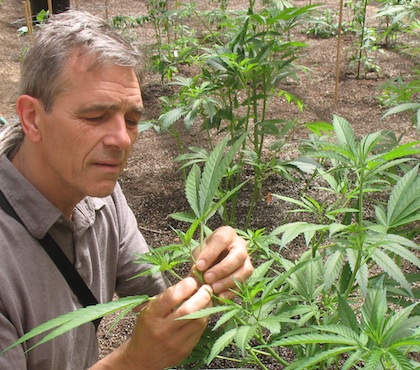 By Fred Gardner (in O’Shaughnessy’s Spring 2005)

You can sing the praises of many courageous doctors, growers, lawyers, dispensary operators and patients’ advocates, but who has done more to implement California’s medical marijuana law than Chris Conrad in his role as an expert witness? Where the rubber really meets the road —in a rural county courthouse with a zealous district attorney trying to convince a jury that Mr. Smith’s x number of plants plus y amount of dried marijuana is proof of ‘intent to sell’— you’ll find Conrad delivering the salient facts in a knowledgeable, persuasive manner.

Conrad, 51, is from rural Maryland, and came to California in the mid-1970s. His primary and secondary education was in Catholic schools. He got his BA from Cal State Dominguez Hills in 1980 and began making his living as a writer. In the late ’80s he found himself focused on cannabis after a niece shared some disinformation provided by a DARE instructor.

Since then Conrad has written extensively about cannabis and its cultivation, and, in the process developed his expertise. In 1992 he and his wife, activist Mikki Norris, spent six weeks in Nijmegen, Holland working for Sensi Seed Bank, a government-approved cannabis research and breeding facility.

The next year they visited hemp farms in France, Holland and Hungary, and spent six months in Amsterdam running the Hash-Marijuana-Hemp Museum. In ’95 Conrad took 20 hours of classes in “cannabis botany, agriculture, pharmo-chemistry, industrial technologies and medical use” at a symposium in Frankfurt organized by German hemp-sters.

Conrad was first qualified as an expert witness in ’94 in the Superior Court of Madera County on an industrial hemp case. “Ron Kiczenski and two of his friends decided to challenge the ban on growing hemp by planting 4,000 seeds on somebody’s land,” Conrad recalls. “The judge wasn’t letting in the information about hemp. I was allowed to testify to the judge, but he wouldn’t let the jury hear my testimony… the jury acquitted Kiczenski but admonished him not to do it again.”

Conrad and Norris were in the large circle around Dennis Peron that helped plan and carry out the Prop 215 campaign in ’95-96. No sooner had it passed than attorney general Dan Lungren tried to impose very low limits on the amounts of cannabis that patients and caregivers could grow and possess. In ’97 the expert-witness phase of Conrad’s career began in earnest. He was –and is— typically called in to refute a prosecutor’s projection of how much medical-grade cannabis a given garden will yield, and/or how much a given patient should use. To date he has appeared in about 100 cases in more than 30 counties. Numerous cases have been dismissed or settled when prosecutors got wind of the fact that Conrad would testify.

Conrad recently published a booklet called “Cannabis Yields and Dosage” that, in 20 pages, discusses every aspect of the contentious “allowable quantity” issue. It explains the reasoning behind the guidelines adopted by Sonoma, Humboldt and Santa Cruz counties (100 square feet of plant canopy and three pounds of bud per patient). It also provides a useful analysis of SB 420, the bill passed by the California legislature in 2003 to “clarify” Prop 215.

Conrad says he wrote the booklet with “people involved in setting policy” in mind. He asks rhetorically, “Why should any locality enact guidelines greater than the SB-420 floor? Because to do so is cost-effective, reasonable and compassionate, The six-plant, eight-ounce limit is neither scientific nor adequate for many patients. A compassionate policy would be to stop arresting patients, leave them their medicine, and not ruin them financially by causing prohibitive legal costs. The counties would benefit enormously —prosecuting a marijuana case can cost $100,000.”

The booklet should prove useful to growers seeking to confirm that their gardens are within the legal limits. Conrad advises growers not to have guns on the premises. “They might think that it puts them at risk in terms of a strong-armed robbery, but to tell you the truth, I don’t hear about people saying that having a gun helped out. I DO know of a number of cases of people getting extra time or injuring themselves. Guns bring in the feds —a large-scale grow or the presence of a gun. I don’t think the benefit is worth it.” Conrad is not anti-gun in general. “When I was growing up in Maryland we had guns to shoot at ground hogs, which destroyed crops,” he says with a no-BFD shrug.

Safe Access Now, founded by Conrad and Ralph Sherrow, maintains a website (safeaccesnow.net) that lists the allowable-quantity guidelines in effect county-by-county. As of January, 2005, Mendocino allows a 100-foot canopy for cultivation but possession of only two pounds. Del Norte allows 100 square feet but only one pound. Tehama allows three pounds but only 10 plants. In most counties, however, the six-plant, eight-ounce “default” limit applies.

The Cannabis Yields and Dosage booklet costs $5 (shipping included) if you send a check to Chris Conrad at pob 1716 El Cerrito CA 94530, or $7 if you order through safeaccesnow.net. It’s printed on 8-1/2 by —11″ high-gloss paper that looks like it could stand up to the humidity of a greenhouse.

When we’d talked in December, 2004, Conrad was waiting for a verdict from Humboldt. “This woman would have had a great case if she hadn’t told the cop in an initial interview that she only uses a gram a day —which is 12 ounces a year, and she’s growing six pounds. I made a real good argument that it was a personal garden, based on how it was laid out, but I don’t know what the jury is going to make of it.”

Now the verdict was in. “It was a split verdict,” Conrad explained, “convicted of cultivation but acquitted of intent to sell, which I interpreted as the jury telling her that she was, indeed, growing too much but also telling the DA that simply having a large supply does not prove intent to distribute marijuana. This distinction is also borne out by the Arbacauskas Appellate decision, that although the defendant was growing more than his “current medical need” would warrant, this was due to inexperience rather than criminal intent. In that case, all charges were dismissed, the Appeals court reviewed the facts, wrote favorably of my testimony, and ruled that it was improper for the DA to re-file the same charges without any new evidence. That decision affects all criminal proceedings in the state.”