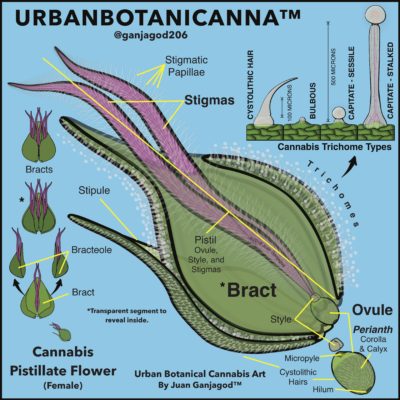 In the cannabis industry, the general terms—bud, cola, nug— are easy enough and universally accepted, but when discussing specific plant parts with botanical terms, confusion reigns.

Foremost are the incorrect uses of calyx and pistil. Growers read or hear about swollen calyxes being a sign of maturity and an indication of readiness for harvesting. What are incorrectly called calyxes or false calyxes are correctly identified as bracts.

Cannabis female flowers do have calyx cells, but not a defined calyx. The female cannabis calyx cells are one part of the perianth, a nearly transparent, delicate tissue that partially encloses the ovule (prospective seed).

Each female flower has a single ovule, which is encapsulated by bracteoles and bracts. The bracts and bracteoles are small, modified leaves that enclose and protect the seed in what some growers refer to as the seed pod.

The bracts have the densest covering of capitate-stalked resin glands of any plant part, and it is within the heads of these resin glands that the plant synthesizes and holds the highest concentrations of cannabinoids and terpenes of any plant part. Bracts make up most of the substance and weight of high-quality marijuana buds.

By definition, a perianth consists of a corolla and a calyx. In more familiar showy flowers, the corolla is the brightly colored petals we generally appreciate when looking at flowers, and the calyx is the smaller green cup (sepals) holding the petals at the flower’s base.

Bright showy colors, large flower sizes, and enticing fragrances evolved to attract insects such as bees and flies, or animals such as birds and bats to collect and transfer pollen (unintentionally) to other flowers.

Cannabis flowers are not brightly colored, large, or enticingly fragrant (at least to most non-humans); marijuana plants are wind-pollinated with no need to attract insects or animals to carry the males’ pollen, hence these plant parts never evolved into significant, attractive, or showy parts.

Each female marijuana flower has two stigmas that protrude from a single ovule; they are “fuzzy” (hirsute), about ¼ to ½ inch long, usually white, but sometimes yellowish, or pink to red and, occasionally, lavender to purple.

Stigmas are the pollen catchers. Some writers identify stigmas as pistils, and this too is incorrect. The pistil is all of the reproductive female flower parts. The Cannabis pistil consists of two stigmas and an ovule (prospective seed). The term is misused in many books and seed catalogs that describe a single Cannabis flower as having two pistils.

If a flower is pollinated, the ovule becomes a single fruit, essentially a single seed, an achene. The perianth tightly clasps the seed and usually contains tannins, which give mature seeds their markings or spotted coat. Between a thumb and finger you can rub the perianth off of a seed.

A well-pollinated typical bud develops from 50 to 150 seeds, a cola easily holds many hundreds, and even a small, but thoroughly pollinated female can bear thousands of seeds.

Cannabis has six kinds of trichomes: three are non-glandular and three are glandular and resin-bearing. Cystolith hairs are the most visible of the non-glandular as these needle-like “hairs” prominently cover all of the above-ground plant parts: stems, branches, leaves, petioles and flowers.

The other two non-glandular trichomes are visible with magnification. These smaller cystolith hairs with warty bumps and teardrop-shaped trichomes are found mainly on the underside of leaves. The larger cystolith hairs provide defense against insects and likely make the plant less palatable to animals. Cystolith hairs also reflect radiation, reduce water loss, and ameliorate near-surface temperatures.

Resin glands synthesize and hold the cannabinoids and terpenes and are of three types: bulbous, capitate-sessile, and capitate-stalked.

Bulbous glands are tiny, are present on the first leaves to form, and are found on stems, branches, leaves, and flowers. Although ubiquitous, their contribution to the overall cannabinoid concentration at harvest is insignificant.

Capitate-sessile gland heads are much larger, sit upon a short stalk, which makes them appear stalkless and hence, described as sessile. Capitate-sessile glands likely contribute to the overall cannabinoid concentration due to their larger size and presence on flowers, leaves and petioles.

Male flowers have capitate-stalked glands on their petal-like tepals, but these are much smaller than those on female flowers. The largest resin glands on male flowers, comparable in size to the largest gland heads on females, form a line on either side of anthers, the pollen bearing organs, popularly called “bananas.” Even so, one would need an enormous amount of male flowers to yield a usable amount of resin. 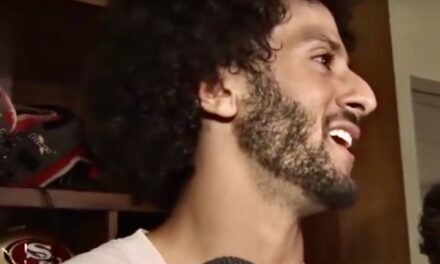 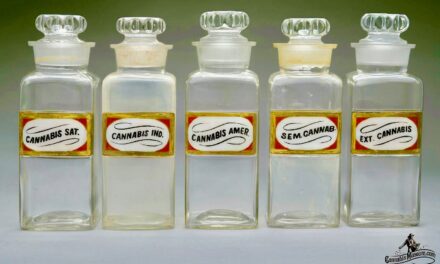 Prohibition 37 (a tragicomedy in three acts) 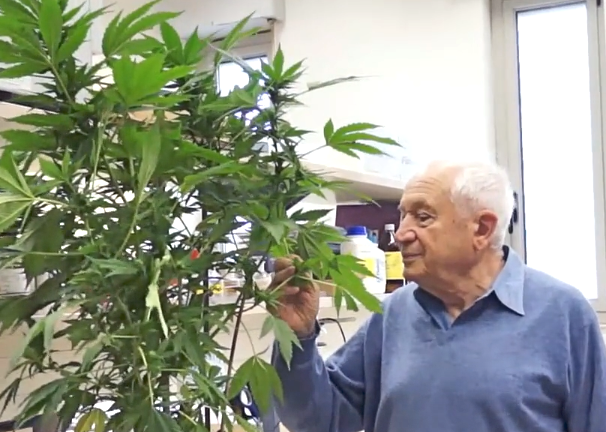 Raphael Mechoulam Gets the Biopic He Deserves