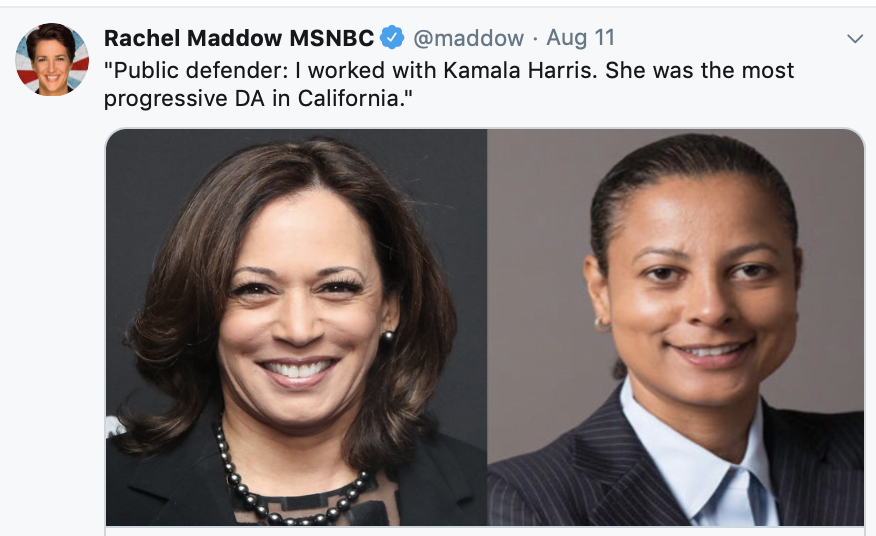 OLD FOOTAGE: I’m stepping out of my small office in the Hall of Justice slipping a cell phone into the breast pocket of my jacket. Kamala Harris sees me from about 60 feet away and hastens down the hall shaking her head in disapproval. “You shouldn’t do that,” she says. “My mother is a physician, a serious researcher, not given to faddish thinking. She says that data on the effect of microwave radiation on the heart isn’t strong enough to establish safety.”  Since that warning from Dr. Harris’s daughter, not once in 20 years have I put my cellphone in the left breast pocket of my jacket. The woman knows how to drive home a point.*

I’m in Kamala’s office. enthusing about the city of Alameda, where we might be able to afford a house: “Marci loves that it’s 10 degrees warmer than San Francisco. Not only is housing cheaper, it’s friendlier, it’s better integrated, you don’t have to make your way around strung-out people on the sidewalks, there’s a long sandy beach to walk on…” Kamala nodded as I listed the glories of the Island City. “I’m glad to hear that it’s changed,” she said, as if she didn’t wholly believe my rap. “When I was a teenager we couldn’t go to parties there. The Alameda police would stop us when we came through the tunnel.”

CUT TO THE PRESENT: Willie Brown writes in the Chronicle August 16, “The Biden camp is staffing Harris’ campaign operation with its people, rather than letting her bring in her own team. Essentially, the plan is to envelop Harris in a Biden blanket.” Her assignment, while wrapped in that polyester blanket, is to inspire “progressive” rank-and-file Democrats to support and work for the Gentleman from DuPont. To pull off this political Houdini Act, it’s crucial that Kamala be seen as “progressive” herself.

To burnish Kamala’s “for-the-people” credentials MSDNC’s Rachel Maddow had longtime San Francisco Public Defender Niki Solis on her show. According to Solis, “Harris was the most progressive prosecutor in the state. This is not an anecdotal opinion. It is based on facts. As San Francisco DA, Harris refused to seek the death penalty —even on a case where a very respected police officer was tragically killed. Marijuana sales cases were routinely reduced to misdemeanors. And marijuana possession cases were not even on the court’s docket. They were simply not charged. Unless there was a large grow case, or a unique circumstance, this was the reform-minded approach then-DA Harris’ office took. The accusations about marijuana prosecutions being harsh during her tenure are absurd. The reality was quite the opposite.

“Sen. Harris’ progressive approach did not end with marijuana prosecutions or lack thereof. She co-founded the Coalition to End the Exploitation of Kids. She then spearheaded a task force combating the human trafficking of girls… Harris also formalized a court for young adults charged with felonies that resulted in them avoiding a conviction and getting a second chance. She brought in a stalwart progressive community organizer by hiring Lateefah Simon to lead that initiative, a diversionary program called Back on Track that set nonviolent offenders on a path to a new job and helped them rebuild within their communities. Back on Track still exists today and has been a pathway for many young adults to avoid the ravages of a felony conviction or incarceration.”

Everything Niki Solis told Rachel Maddow —and wrote in an op-ed on Maddow’s website that also ran in USA Today— is true. It’s also true that the programs she credited to Kamala Harris were updated and/or renamed version of programs instituted at the DA’s office by Terence Hallinan. Only the names had been changed to create distance between Kamala’s policies and Hallinan’s. According to Susan Breall, former chief of the criminal division for crimes of violence against women, children, the elderly and intimate partners, “Before Terence nobody had ever heard of ‘a progressive district attorney,’” Breall says. “He was the first to run on a platform of ‘alternatives to incarceration for non-violent offenders.’ And when he came in, the culture of the office was transformed.”

Hallinan replaced the 14 right-wingers he fired when he took office with mostly younger lawyers, including some top-notch recent law school graduates. An exception to the youth movement was Elliot Beckelman, 49, who had been counsel to the Hotel and Restaurant Workers’ San Francisco local. By the end of his first term the DA’s office was operating a Drug Court, (Community Courts (at which neighborhood residents decide how infractions should be dealt with), and a Welfare Fraud Diversion Program (which “enables a recipient of benefits who has gotten a job to avoid a criminal conviction by entering into a repayment program through which they make restitution for the benefits they received unlawfully”). His “First Offender Prostitution Program” funded counseling at the Youth Guidance Center for girls on the brink of entering “the life.” He described his approach to domestic violence as “Intervene early and make the perpetrator go to batterer’s school for a year, get a restraining order and put the victim in control of the situation.” He created a Mentor Court to help young people avoid a first felony conviction —a barrier to turning your life around that brings with it loss of food stamps, public housing, and the possibility of  student loans.

It’s a damn shame that because of their bitter falling out, Kamala Harris would not state proudly that as San Francisco district attorney she continued 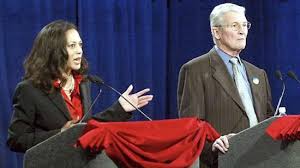 and refined reforms introduced by her predecessor. And it’s Kayo’s own damn fault. Vincent Hallinan had instructed him and his brothers growing up in Marin County that as soon as  you recognize a fight is unavoidable, get in the first punch. In January 2000 Kayo had been convinced that Kamala was planning to run against him in November 2003, and he got in the first punch by planning to demote her. I tried hard but couldn’t convince him not to. (On the playgrounds of Brooklyn, “You started it!” justified heavy retaliation.) When Kamala did indeed run against him in 2003, he was convinced he’d been right. But he’d made a self-fulfilling prophecy.

Niki Solis makes much of Kamala Harris’s leniency in prosecuting marijuana sales cases. She doesn’t note that the political risk for Harris had been greatly reduced by the passage of San Francisco’s Proposition P, introduced by Hallinan as a supervisor in 1991, and California’s Proposition 215 in 1996, which Hallinan had been the only DA in the state to support. Would Kamala have stood alone like that? After Prop 215 passed, as recounted earlier in this memoir, Hallinan urged his fellow district attorneys to leave implementation up to their county health departments. (San Francisco is a unique jurisdiction —both a city and a county.) Kamala quietly welcomed the new political reality created by Prop 215, but it was Kayo who helped make it come to pass.

During his eight years as district attorney, Hallinan maintained strong ties to the medical marijuana community —dispensary owners, growers, and consumers. To cite but one example here, arly in 2001 the Medical Board of California subpoenaed the records of 46 patients whom Tod Mikuriya, MD, had authorized to use cannabis in treating various conditions. Mikuriya filed a civil suit to protect his patients’ privacy. Hallinan weighed in with a statement of support:

“It is no coincidence that the Medical Board is going after Tod Mikuriya. Most California doctors have taken the federal threats very seriously and are afraid to risk their licenses. Hundreds of others have bravely written recommendations for patients with AIDS and cancer, but when it comes to conditions like arthritis and pain and depression and insomnia, only the bravest of the brave are willing to risk the wrath of government inquisitors. That is why Tod Mikuriya has become the doctor of last resort for thousands of patients in California. And that is why he has been the subject of so many complaints to the medical board —not from patients, but from law enforcement officials who refuse to accept that marijuana really does have a wide range of medical uses.

“It’s time for the state medical board to accept reality. It’s time to heed the message that the voters of California sent when they passed Prop 215. Tod Mikuriya is deserving of honor and his patients are deserving of privacy.” 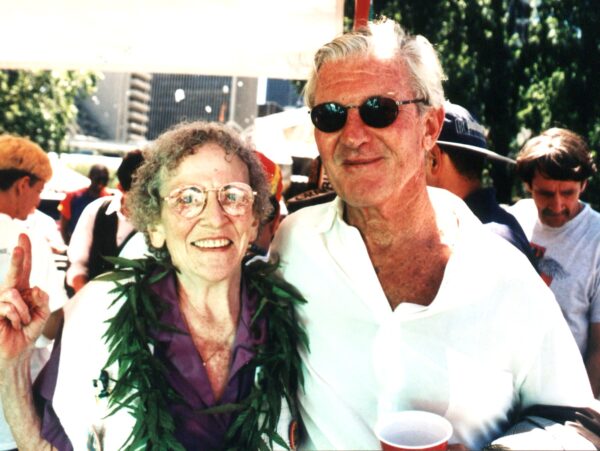 Terence Hallinan with Mary Rathburn (“Kayo” and “Brownie Mary”) at a pro-cannabis rally.  In background at right is John Hudson of the “Flower Power” dispensary.