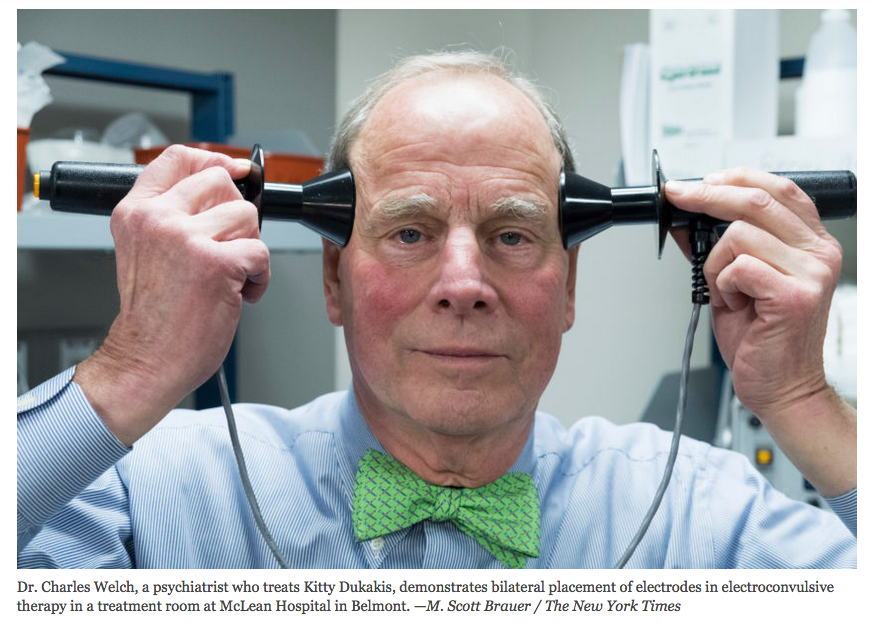 Let’s look at these claims… The American Psychiatric Association has a lot of money and pays high fees to various major PR companies: Here goes…

“The treatment has come a long way since it was depicted as a barbaric and terrifying tool for subduing patients in “One Flew Over the Cuckoo’s Nest.”  (They ALWAYS trot this out and we’re all getting a bit tired of it – please try something else guys.

1. It now has anaesthesia and paralysing drugs to prevent harm form the massive convulsion.

3. It is ultra brief

4. The electrodes are placed to avoid damage.

6. Its method of operation is not really known.

1. Anaesthesia and paralysing drugs were introduced 60 years ago, in the early 1950s to prevent fractures. It was NOT to reduce brain damage which was at the time the aim of ECT.

3. Brief Pulse ECT was first used 70 years ago in 1946. Ultra brief Pulse ECT was used in the 1960s – 50 years ago. It does NOT refer to the ECT treatment, it is the width of the Square Wave Pulse of which there are 140 per second for an average 8 seconds = well over 1000 ultra brief electrical pulses firing through the brain per single treatment.

4. Electrodes: The first manipulation of electrode placement was 74 years ago in 1942. One sided electrodes were in common use in 1970, 46 years ago. Today most ECT use remains bilateral exactly as seen in the movie.

5. 80% success rate: There is no reliable evidence that more than 40% of ECT recipients, and often far less that that, get any positive effects at all and these effects are not likely to extend beyond a few weeks. There is also NO evidence that real ECT has any benefit over placebo ECT beyond the acute injury phase.

6. Unknown action: Saying this confers an almost miraculous effect, (not unintentionally either.) The truth is far more mundane. The `improvements’ seen in the under 50% of people who have a positive response, are the symptoms of a Traumatic Brain Injury. The acute symptoms of concussion can include a mild euphoria (also a short-lived side effect of seizures), known in neurology as “concussion euphoria” (also short-lived), apathy, memory loss, vagueness and confusion and a lack of initiative where the person agrees with whatever is suggested to them. They may also suffer from anosognosia as a result of injury to the brain where the person is unaware of their deficits.

No matter how often these issues are glossed over by the PR handouts that psychiatrists commonly distribute there are some FACTS that cannot be disguised.

First: The neurological definition of a Traumatic Brain Injury is:

1. A TBI occurs when a force is applied to the head that causes a disruption in normal brain function –

2. ECT applies an electrical force to the head that causes a grandma seizure and a coma, both serious disruptions to normal brain function –

The second major factor is how lucrative ECT is. A Psychiatrist performing ECT can make $30,000 a week, and even small hospitals regularly make over $20 million a year just from ECT.

I suggest the readers of this article check out some of the over 2000 reports from people whose lives have been destroyed by ECT. For every Kitty Dukakis and Carrie Fisher there are 10 who didn’t come out well:

I’m told ECT is given to cure suicidal tendencies, which I find very peculiar, because before ECT I was never suicidal,

I would much rather have lost a limb or 2 than to have lost my memory — my “self.” I try but I just can’t recreate who I am. The memories of our past give us an understanding of where we fit in the world. I have experienced more than a “cognitive deficit. It isn’t fun to sit and listen while my children reminisce about their growing up years, while I am unable to participate in the conversation. I was not relieved of depression. I was not told that memory loss would be permanant. It has disabled my life Damage is unquestionable…Degrading, hostile and barbaric.

It ruined my marriage, my life…The effects of the “treatment” made me suicidal.

When I awoke after each “treatment” I felt completely broken, like a walking zombie.

Some patients had had obscene numbers of ECTs. It was probably just a coincidence that each treatment earned the hospital a lot of money and that the psychiatrists who brought in the most money gained significant perks. (Nurse)

On the reclassification of the machines

Dr. Charles Kellner, a (highly voluble ECT proponent) professor of psychiatry at the Icahn School of Medicine at Mount Sinai in New York City and chief of the ECT service at Mount Sinai Hospital, says, ““Its use for these indications {schizophrenia, catatonia & mania) is widespread, even ubiquitous, and to deny the extensive evidence in support of that is indefensible,” Dr Kellner frequently states that hundreds of studies support his claims- unfortunately searches by highly respected groups such as the UK NICE ECT review in 2003 found only FOUR poor quality studies, NONE of which supported ECT’s use in schizophrenia. In fact there has never been a shred of evidence that ECT has any value whatsoever in the treatment of schizophrenia. and it is not listed as useful for this in Europe, the UK or Ireland. Catatonia is so rare that many psych professionals have never seen it, and ECT  often CAUSES mania.

Then, of course Dr Kellner was once paid to promote ECT by the manufacturers of the machines and now runs the CORE research program at Duke University that solicits $millions in grant money, and admitted in January 2015 that ECT causes structural damage to the brain. This apparently causes Dr Kellner no concerns.

“All of us sighed a big sigh of relief,” said Dr. Stephen Seiner,[re the possible reclassification of ECT machines which has yet to be passed]  director of the psychiatric neurotherapeutics program at McLean Hospital in Belmont, Mass., which performed 10,000 ECT treatments last year — the most in the US. “It’s an important message to the medical community that ECT is safe.”  Well might Dr Steiner breath a sigh of relief, as his stake is the $82 MILLION or more that ECT brings in to his hospital every year. His concern over his brain damaged patients doesn’t appear to give him any pain whatever.

This whole push has been to circumvent the requirement that all devices classified as ECT is, as high risk, undergo trials to prove they don’t cause harm. ECT proponents are well aware that forcing the manufacturers to conduct proper trials will get ECT banned, so  it’s better to get the rules changed instead. ECT is VERY valuable to a few VERY powerful groups.

When the going claim from psychiatry that ECT is the “gold standard” for treating depression outright lies will be what the FDA listens to. The usual performance will ensue, denial, ignoring unwelcome evidence, distortions, fake studies, you name it and ECT will become, for the first time in its long destructive career, a benign, universal treatment for the masses.

Remember this is a group of people who took a statement that ECT had NO impact on suicide and said brazenly that it DID!

They took a study that said it was no better than fake ECT, changed the numbers, put in a lot of stuff that was totally unrelated to ECT, and said it DID!

Dishonesty is the name of the game here. Will the public buy it?

[If]  “…the agency (FDA) will require manufacturers of ECT machines to launch clinical trials for these indications. It’s widely expected they will decline to do so because of the cost.” The $5 BILLION ECT industry somehow doesn’t have sufficient funds to hold clinical trials to test whether their product is dangerous or not? Trials that have NEVER been done. Can you imagine a manufacturer of a cardiac device claiming that it was too expensive to test that their product might cause harm? And getting away with it?

[They will still be able to] …“provide ECT “off label” to patients with mania, schizophrenia, catatonia, or other conditions.” Interestingly there is NOT a shred of evidence now or ever that ECT has any value whatsoever in the treatment of schizophrenia. The UK NICE ECT review in 2003 specifically stated this and recommended it not be used for this purpose. It is not listed as useful for this in Europe, the UK or Ireland.

[But} “…insurance companies may refuse to pay. And physicians may worry about the potential for malpractice lawsuits if anything goes wrong.” Since every recipient of ECT suffers permanent brain injury to some degree, when one in every six experiences a life threatening complication during the treatment, one in every 200 over 65,, and one in 600 on average will die often within days or weeks, 25% of over 80s will not make it through a year compared with only 2% of their peers, and when suicide is 5% more likely after ECT compared with similar patients who have NOT had ECT, perhaps insurance companies might do well to reassess the risks. Also, if as the psychiatrists say, ECT is always going to be ongoing because it doesn’t “work” for most, insurance companies might also query the ongoing and extraordinary costs involved.

Sadly, because the most severely brain damaged, as, I suggest, in Kitty Dukakis’ and Carrie Fisher’s case, are frequently unaware of just how badly they have been affected, most victims they are unlikely to to seek reparation. Also, since intellectual damage reduces many to a handicapped level of functioning, they too are unlikely to sue. A further complication for litigation is that families are often pleased that their family member is subdued , as Mrs Dukakis appears to be, almost to the point of dementia. An early psychiatrist said of ECT that “it didn’t do much for the patients but it kept the staff and families happy.”

“Labeling ECT “high risk” for conditions other than depression will have a “chilling effect” on the therapy for thousands of terribly ill patients, most of whom have exhausted all other options, said Dr. William McDonald, a professor of psychiatry at Emory University.”

The only available “other options” offered by psychiatry today are the neuroleptic drugs that a) have very limited effectiveness, b) are highly toxic & c) often have the paradoxical effect of CAUSING the condition they purport to treat. That is, the TREATMENT has caused the condition to become untreatable. What is “chilling” is the belief that 450 volts pulsing through someone’s brain for 8 seconds can be seen as “treatment” by doctors who are sworn to “first do no harm”

Re 70 year old Kate MacDonald, “If someone said to me, ‘Kate, you’re [either] going to lose a whole bunch of memories or be depressed the way I was,’” she said, “I would say, ‘Take the memories.’” Perhaps, luckily for her she didn’t lose the memories of her children, her husband and family, her education, job skills, and friends. Perhaps she didn’t lose, as so many do, her emotions, her ability to find her way about, her ability to read, play a musical instrument, create art or literature.

That “She’s (Kate MacDonald) convinced ECT saved her life.” This is called spellbinding and is more an example of brain injury and possibly brain washing, than reality. Many psychiatrists have never prescribed ECT in long and distinguished careers, many are extremely high profile and quite outspoken, Ivor Browne Emeritus Professor , Pat Bracken, (Ireland), Bob Johnson Highly distinguished forensic psychiatrist (UK), Peter Breggin (USA), Niall McLaren (Australia) plus the approx 70% of everyday psychiatrists worldwide, who also never prescribe it. It seems fair to suggest that if their patients don’t need it, why do those of the highly voluble, very wealthy hospital doctors like Charles Kellner with clear vested interests do so? $$$$MILLIONS of reasons!